Lifting a half-century veil of secrecy, Israel's Mossad spy agency is opening its archive this week to reveal the story behind the legendary 1960 capture of Nazi mastermind Adolf Eichmann.

The 'Operation Finale' exhibit, curated by a Mossad officer who can't be fully identified, displays never before seen items, names and documents that led to Eichmann being snatched in Argentina.

It also discloses new details, such as how forensic experts identified Eichmann by his ears.

Eichmann was in charge of implementing Adolf Hitler's 'Final Solution', the plan to exterminate the Jews of Europe. Six million Jews were killed by the Nazis and their collaborators during World War II.

Mossad's exploits typically become known only when something goes wrong. This exhibit tells a success story, offering the most comprehensive picture to date of the complex operation that helped shape the agency's image - bringing a top Nazi criminal to justice.

'This is the first time Mossad carried out a huge operation overseas, and it had to invent all this "James Bond" stuff in the process,' said the curator, who can be identified only as Avner A because of agency regulations.

'This operation made Mossad,' he said. 'It proved to itself and to the entire world that it could pull off an operation at the end of the world with a variety of bodies, under all kinds of identities and with various technical and technological means.'

Avner said the agency's tactics and strategies have evolved since then. Even so, the exhibit was initially intended to remain classified, but 'the Eichmann story is so strong that we just couldn't keep this one to ourselves'.

Among the highlights of the exhibit at the Beit Hatfutsot museum of the Jewish people in Tel Aviv are the original Mossad file on Eichmann, code named 'Dybbuk' - Hebrew for 'evil spirit,' the briefcase with a concealed camera that took the first pictures of Eichmann in Buenos Aires, the fake licence plates the agents made for vehicles to track Eichmann, the gloves used to nab him, the needle used to sedate him and the forged Israeli passport his captors used to smuggle him out of Argentina.

Eichmann's 1961 trial in Jerusalem captivated the country and the world with gripping public testimony of more than 100 Jews who survived extreme torture and deprivation in concentration camps and brought to life the horrors of the Nazi 'final solution.'

Eichmann was convicted of war crimes and crimes against humanity and was hanged the following year, the only time Israel has carried out a death sentence.

After the war ended in Germany's defeat, Eichmann escaped American captivity and fled to Argentina in 1950, assuming the name Ricardo Klement. 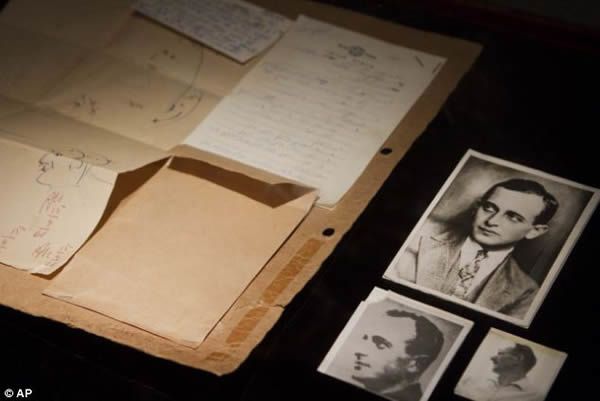 A forged Israeli passport used to smuggle Adolf Eichmann out of Argentina, is on show

There he kept out of sight until 1957, when his eldest son, Nick, befriended a girl named Silvia.

Her father, Lothar Hermann, was a Holocaust survivor. After becoming suspicious of the young Eichmann, he dispatched a letter, displayed in the exhibit, to Fritz Bauer, a fellow Jewish Holocaust survivor, who was the German state of Hesse's chief prosecutor. Bauer informed the Israelis, who started investigating.

Two years later, Mossad agent Zvi Aharoni located the family home in Garibaldi Street in Buenos Aires and returned with photographs of Ricardo Klement that matched those taken of Adolf Eichmann. Israeli forensic experts matched the details of the ears in each photo for final confirmation.

On the evening of May 11, 1960, a seven-man team waited near the bus station where Eichmann arrived each evening from his job at a Mercedes Benz factory.

After Eichmann got off the bus, agent Zvi Malkin jumped on him, making sure to put his gloved hand inside Eichmann's mouth, in case he had a cyanide pill hidden inside a tooth as some former top Nazis were known to have in case of capture, Avner said.

'If you move,' Aharoni told Eichmann, 'you will be shot in the head,' according to the Mossad exhibit. 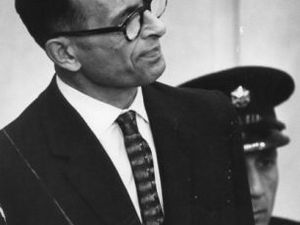 Monster: Adolf Eichmann during the war crimes trial in Jerusalem that enthralled the nation (left)

Eichmann mumbled back in German: 'I accept my fate.'

The exhibit also showcases the personal effects found on Eichmann's body - a comb, a pocket knife and a plastic cigarette holder.

Eichmann was held in a safe house for nine days until the group flew out in an El Al Israel Airlines plane that had brought an official Israeli delegation to mark Argentina's 150th anniversary. Eichmann was drugged, dressed in an El Al uniform, seated in first class and passed off as a crew member who was ill. 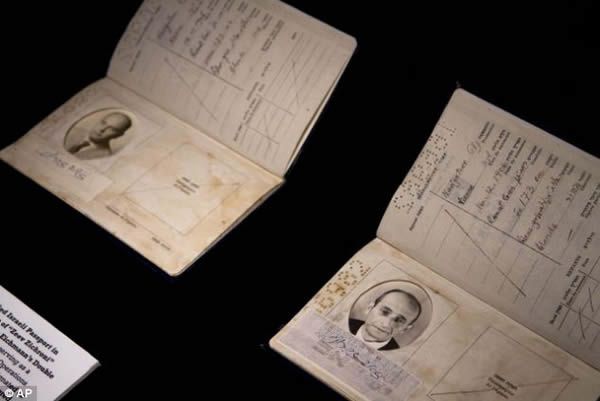 A forged Israeli passport used to smuggle Adolf Eichmann out of Argentina, is on show Adolf Eichmann, who died June 1962, is pictured in the box during his trial at the Jerusalem Supreme Court in Tel Aviv Eichmann relaxing on his bed, reading a book in his cell at the Teggard Fortress near Nazareth, just before he was taken to trial in Jerusalem Eichmann has been portrayed on screen many times. Here Stanley Tucci plays the Nazi mastermind alongside Kenneth Brannagh as General Reinhard Heydrich in the BBC's 2002 film Conspiracy - The Meeting at Wannsee

The operation was so secret that even diplomat Abba Eban, who later became Israel's foreign minister, had no clue he was providing cover for a plane to return to Israel with Eichmann and the Mossad team, leaving Eban and other diplomats behind.

In researching the operation, Avner said he made several new discoveries. For instance, there was a Plan B, should the airlift fail, to smuggle Eichmann in a freighter ship transporting frozen meat, and even a Plan C that called for him to be dropped off at a halfway house in Europe before a final trip to Israel.

Avner even found the Israeli optometrist who agreed to prepare glasses for Eichmann, after his original pair were broken during his capture. The glasses were made of plastic to prevent Eichmann from using glass to slit his wrists.

'The more I discover new details, the more I realize that I don't have the full story,' said Avner, before adding. 'We'll probably never truly know the full story.'