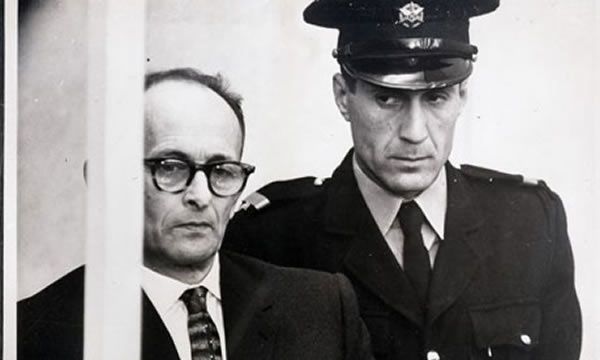 Jerusalem, 1961: Adolf Eichmann listens to the reading of a 15 count indictment as a guard looks on

Adolf Eichmann's trial on charges of war crimes might, in the eyes of some people, present a foregone conclusion. But the manner in which the Israelis have been able to make him face these charges of major international crimes will puzzle the lawyers for many a day. And the problems may not appear as academic as might be supposed. Israel might find public opinion shifting against their avowed aim to try this man before their own court.

The present crisis in the Eichmann tale centres around the Argentine claim that Eichmann has been illegally abducted from its territory. It is a cardinal principle of international law that a state must not perform acts of sovereignty in the territory of a foreign state. It is, therefore, a breach of international law for a state to send its agents to the territory of another state to apprehend persons accused of having committed a crime.

It is permissible, for example, for a state to send its officials to ask that a person may return but, if he refuses to be taken away, then any act which seeks to put pressure on him is illegal. Shanghai-ing a man is the grossest breach of the state's sovereignty where the man is residing.

Thus in the case of Jabez Balfour in 1895, there was an element of a trick but nothing graver to incur the wrath of Argentina, where that London financier was hiding. Balfour had left the wreckage of the Liberator Building Society behind him, with liabilities in the region of £8 millions. Superintendent Robert Forest was sent by Scotland Yard to find the man and bring him back to justice.

The two men met and became fast friends. They wined and dined, without Balfour realising who his dining partner was. Forest persuaded Balfour to go on an Argentine ship and when the vessel was three miles out to sea, arrested him

Balfour was tried in England and sentenced to fourteen years imprisonment. No complaint by Argentina appears to have been made in that case.

A more recent example was that of Germany, who restored to Switzerland in 1935 a certain Herr Jacob-Salomon, an ex-German political refugee who had been abducted from Switzerland with the connivance of German officials. The case was submitted to arbitration but soon after the beginning of the written proceedings, Germany admitted that a State official "acted in an inadmissible manner in this case" and surrendered Jacob to the Swiss authorities.

There is, in fact, a first duty upon the offending State to hand over the person in question to the State in whose territory he was apprehended. There is a duty, also to pay reparations for the offence committed. It could well be, therefore, that before the Israelis get the chance of putting Eichmann on trial they will have to bow to the authority of the United Nations to determine whether the removal of Eichmann from Argentina was lawful.