Starting as a dancer in travelling theatrical companies before emerging as a chorus girl on Broadway, Lucille Le Sueur is finally signed, in 1925, by MGM studios and becomes Joan Crawford. 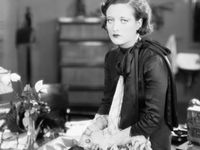 The American actress perfectly crosses Hollywood's eras, from silent films to modern cinema: in the 1920s, she epitomizes the absolute flapper girl according to Francis Scott Fitzgerald; in the 1930s, she embodies hopeful Depression-era heroines, she ventures into film noir during the 1940s before earning an Oscar in the 1950s. For most movie fans, she is the tough Vienna, the lead character in Nicholas Ray's Johnny Guitare. In 1955, she marries the Pepsi Cola Company's chairman, Alfred Steele, and takes his vacancy at his death, in 1959, until 1973.

Joan Crawford retired from the public scene, in 1974, after unflattering photographs of her were released: 'If that's how I look, they won't see me again.' A choice that illustrates the legendary actress's coquetry: 'I never go outside unless I look like Joan Crawford the movie star. If you want to see the girl next door, go next door.' Because of her sexual ambiguities, she belongs to these gay icons, both harsh and endearing, especially when it comes to her own children. In 1979, her eldest daughter published a very hostile biography untitled Mommie Dearest. Walt Disney Pictures designed the Evil Queen of Snow White after her.