Our step-grandmother, Doris Elizabeth Wilkins, who has died aged 93, escaped Nazi Germany not long before the outbreak of the second world war and later became a midwife in Bristol. 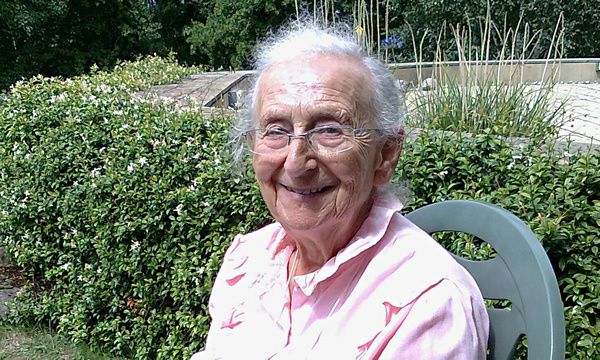 Doris Elizabeth Wilkins managed to get out of Germany in August 1939; her mother and brother died in concentration camps

Although she was known to most as Elizabeth, she was born Doris Wolf in Langen, Hesse, the daughter of Semy Wolf and his wife Else (nee Simon). Leaving Germany on 20 August 1939, she was taken in by the Rev Richard (“Papa”) Pechey and his family in Yateley, Hampshire. Hopes of a reunion with her father, who had managed to escape to Colombia in 1938, were dashed when he died before she could make the travel arrangements for her visit. Both her mother and younger brother, Walter, died in concentration camps. The names of the Wolf family are inscribed on the Stolpersteine (the “stumbling stones”) in Langen that commemorate victims of the Holocaust – those who died and those forced to flee.

Elizabeth had a flair for languages and soon mastered English. Music was also important. Her mother had been taught the piano by a pupil of Clara Schumann, and Elizabeth had a lifelong affection for Bach and the classical canon, as well as being an accomplished pianist herself.

After training as a nurse in Grantham, Lincolnshire, she worked in Nottingham before moving to Bristol to train as a midwife at Southmead hospital, where she spent most of her career. In 1948 she met Lionel Wilkins, a recently widowed clerk working for Rolls-Royce. They married in the same year, and when she joined him and his two daughters in Filton, a little middle-European Jewish cultural colour was brought to English suburban life.

In 1976 Elizabeth and Lionel moved to Cornwall, a place they had explored in their early years together on Lionel’s motorcycle. Lionel gardened, while Elizabeth taught German for a time in St Austell. After Lionel’s death in 1980, she took occasional jobs in London and the south-east as a maternity nurse.

A convert to Anglicanism, Elizabeth remained proud of her Jewish ancestry and visited Israel several times. In 2000 she moved into a St Monica Trust home in Bristol, from where she made several trips to Asia while into her 80s. Her gratitude to Colombia for the refuge it had given her father found expression in the financial contribution she made to a project there supporting teenage boys from troubled backgrounds.

Although her last few years were marred by Alzheimer’s disease, Elizabeth’s years at St Monica’s were contented ones. Despite the tragedy that marked her early life she felt able, as she put it, to count her blessings.

She is survived by one stepdaughter and by her step-grandchildren.