BERLIN — When Nelly Toll was 8 years old, during World War II, she rewrote the Cinderella fairy tale with a feminist twist. Instead of Prince Charming, a powerful princess invited Cinderella to live in her castle and enjoy a pianist performing in a sun-drenched room. “Girls in the Field” from 1943, by Nelly Toll, part of the exhibition “Art From the Holocaust” opening Jan. 25 at the German Historical Museum in Berlin. Collection of the Yad Vashem Art Museum, Jerusalem, Gift of Nelly Toll

Ms. Toll illustrated her story in seven watercolors, basing Cinderella on feisty women in Russian literature and the pianist on her mother, Rozia. But she concocted the fairy tale to transcend reality. She and Rozia, both Jewish, had locked themselves in a tiny room of a Christian family’s home in Nazi-occupied Poland.

“There is no evidence in the pictures of war, even though any minute our door might have opened to let the Nazis in,” said Ms. Toll, now 80 and living in New Jersey, who recalled hiding in 1943 and 1944.

Two of her watercolors will soon be on view in “Art From the Holocaust,” an exhibition at the German Historical Museum in Berlin of 100 works that were clandestinely created by 50 Holocaust-era artists. Of the group, half were killed by Adolf Hitler’s troops, but their creations survived. 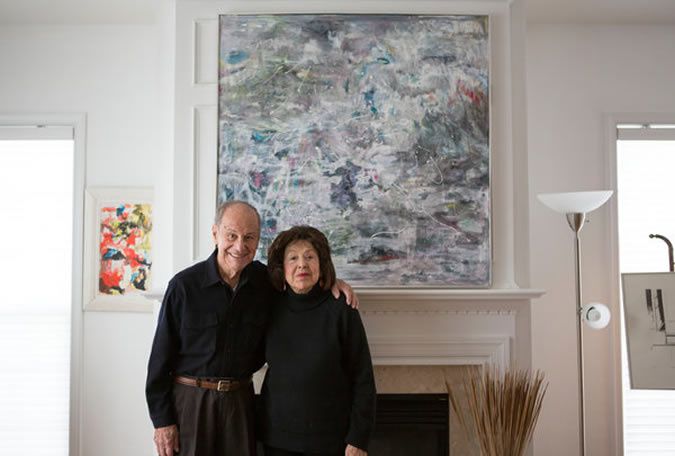 The painter Nelly Toll, a Holocaust survivor, and her husband, Herb Toll, in front of two of her recent paintings in their home in Vorhees, N.J. Credit Jessica Kourkounis for The New York Times

The Holocaust memorial group Yad Vashem organized the exhibition, which opens Monday and runs through April 3. In choosing from Yad Vashem’s collection of about 6,000 Holocaust-era art donated by survivors and their families, and tracking down the stories behind these works, the curator Eliad Moreh-Rosenberg aimed to draw attention to this overlooked genre’s diverse themes.

“Once they hear this art exists, people immediately think about stereotypical images from the Holocaust: barbed wire, yellow stars, chimneys,” Ms. Moreh-Rosenberg said in an interview.

Such symbols appear in a few works but feature wry twists. 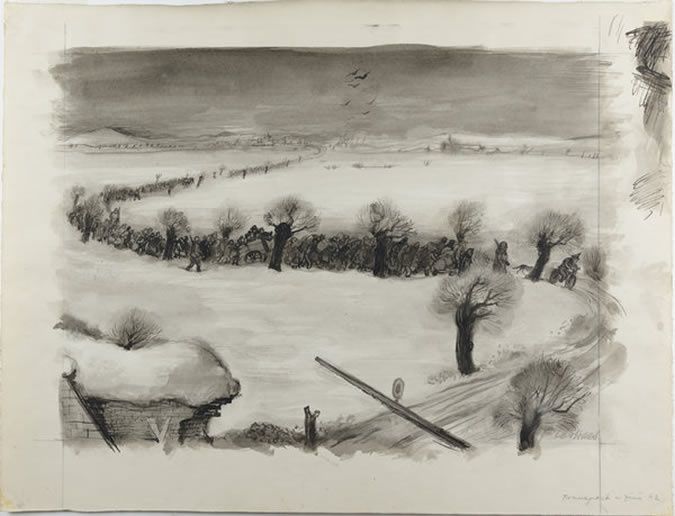 A work by Leo Haas, born in what is now the Czech Republic, shows the 1942 arrival of prisoners to the Theresienstadt ghetto. Mr. Haas worked in the technical department there, creating Nazi propaganda by day and his secret art by night. Using purloined ink and paper, he portrayed inmates in a tidy serpentine line, emerging from a mountainous horizon to wind around symmetrically planted trees. Mr. Haas included a tiny “V” in the corner, the symbol of Theresienstadt’s underground movement.

Bedrich Fritta, with Mr. Haas, also included the “V” in his works. One Fritta portrait in the Berlin exhibition shows a pickax-wielding laborer, whose jacket has a Star of David. But Mr. Fritta’s imprisoned laborer is handsome and muscular, defying Hitler’s stereotype of Jews as feeble.

For Ms. Moreh-Rosenberg, it’s not simply the artists’ themes that are rebellious, but also their determination to smuggle art supplies. Preparations for the exhibition “Art From the Holocaust” at the German Historical Museum in Berlin. Credit Gordon Welters for The New York Times

“When you’re fighting for your life and your basic human needs,” she says, creating art “is not just an escape, it’s an active choice of defiance.”

Mr. Fritta paid for that gamble with his life. The Nazis discovered his secret art and deported him in 1944 to Auschwitz, where they killed him. They also deported Mr. Haas, but he survived to exhume 400 artworks of his and help locate 200 of Mr. Fritta’s buried in Theresienstadt. (Mr. Haas died in Berlin in 1983.)

Ms. Toll said her mother begged the family hiding them to procure watercolors and told her that the captivity was part of a plan to help stimulate their imaginations. It also distracted Ms. Toll from agonizing over her missing brother and father. “My mother was my teacher, my girlfriend, my doctor when I got sick,” Ms. Toll said. “She was all these roles.” Chancellor Angela Merkel of Germany is scheduled to open the exhibition with Ms. Toll to commemorate 50 years of German-Israeli relations. The anniversary comes as many global Jewish leaders are still questioning Germany’s ability to return art looted from Jewish homes or sold under duress during Hitler’s time in power.

Earlier this month Germany’s Culture Ministry issued its report on the collection of Cornelius Gurlitt, the octogenarian recluse whose father, Hildebrand, was one of Hitler’s art dealers. The younger Mr. Gurlitt hid about 1,200 works of art in Munich for decades before German officials confiscated the collection as part of a tax inquiry. A German magazine leaked word of the trove in late 2013.

After nearly two years and $2 million spent on the project, the report identified only five looted works. But the findings were not endorsed by all members of the committee that researched the collection. The ministry completed the report just hours before its news conference, leaving little time for members to completely read and approve it, according to Agnes Peresztegi, a task force member and president of the Commission for Art Recovery, a wing of the World Jewish Congress. She noted that the task report was in German only. Some of its members, including the Israel Museum’s representative, Shlomit Steinberg, are not fluent in German. Site of the forthcoming exhibition “Art From the Holocaust” at the German Historical Museum in Berlin. Credit Gordon Welters for The New York Times

“Good wishes and getting things done aren’t the same thing,” Ms. Peresztegi said. “Germany still has soul-searching to do.” She noted that Germany’s websites for the Lost Art Center and the German Lost Art Foundation lack full English translations.

A task force spokesman did not respond to requests for comment. A website for the German Lost Art Foundation has contained a statement since 2015 announcing that the English version is under construction.

Ms. Moreh-Rosenberg, the curator, said she wished that the chancellor’s participation in the exhibition would “increase awareness of the Holocaust and increase sensitivity about the justice that still needs to be done.”

Ms. Toll said she hoped that visitors to the exhibition would acknowledge the destructive power of religious intolerance while appreciating Hitler’s “failure to kill the spirit,” including the creative spark shown in the work of a boy her age, Petr Ginz from Prague. In one of Petr’s displayed watercolors, he portrays the room he shared with other children in Theresienstadt in 1943 as a cheery collection of summer camp bunk beds. Petr edited the secret “school” newspaper. In September 1944, the Nazis transported him to Auschwitz and murdered him.

A few months later, the Russian Army liberated the town of Lviv where Ms. Toll was hiding. She ran into the street where Russian soldiers gave her candy. News came that Nazis had killed her brother and father. She and her mother moved to the United States, where she became a citizen, married and earned a Ph.D. in English. She still loves to paint.

“It was a long time ago,” Ms. Toll said of the secret room. “It feels like a different version of me.”