Philanthropist and heir to the Littlewoods empire who became a generous patron of the arts. Sir Peter Moores, who has died aged 83, inherited a half share in the family business – the Littlewoods pools, retailing and mail order empire – and established a charitable foundation to further his interests, particularly in music and the visual arts.

There was nothing dilettantish about Moores’s commitment. His tastes were discriminating and his knowledge extensive – particularly in the field of opera – and he was personally involved in every funding decision as well as initiating projects such the Peter Moores Foundation scholarships. A notice posted on the Peter Moores Foundation website directed grant applicants to look elsewhere for financial support, because the “Foundation supports projects which come to the attention of its Patron, or Trustees, through their interests and special knowledge... General applications for grants are not encouraged and are unlikely to succeed.”

Yet Peter Moores’s aims were the opposite of elitist. He began his philanthropy in the 1950s, helping struggling young singers and musicians whom he thought promising. Joan Sutherland was an early beneficiary as was the conductor Colin Davis. He became a leading supporter of operas sung in English; in the 1960s he cajoled a reluctant EMI to produce and issue Reginald Goodall’s Ring Cycle, recorded live at the Coliseum; he financed more than 30 other recordings of opera in English on the Chandos label and in 2004 the foundation announced it would be financing a filmed version of Mozart’s Magic Flute directed by Kenneth Branagh.

Later he sponsored the Opera Rara classical music label, which specialises in the recording and issuing of more obscure pieces from the repertoire. Without Moores there would have been no Almeida Opera Festival, no Rossini’s Otello at Covent Garden or Ermione at Glyndebourne.

In the field of visual arts Moores gained an international reputation for the Peter Moores biennial contemporary art exhibitions held at the Walker Art Gallery in Liverpool from 1971 to 1986. In 1993 he bought Compton Verney House, near Stratford-upon-Avon in Warwickshire. Motivated by a desire to encourage people of all backgrounds to learn more about art and culture, Moores paid for its restoration and put together an eclectic collection of art and artefacts including ancient Chinese bronzes, Tudor portraits, 18th-century Neapolitan landscapes, giant boots and huge teapot shop signs. It opened as a gallery in March 2004 and was hailed as a “people’s palace of popular culture”.

Peter Moores was born on April 9 1932 in Lancashire, the fourth child and second son of John (later Sir John) Moores and his wife Ruby. The son of an Eccles bricklayer, John Moores had worked as a messenger boy before founding, in 1923, Littlewoods Football Pools, followed in the 1930s by a mail order business and department store chain.

By the time Peter was born his father was already a millionaire, but he could never shake off his blue-collar roots. “My grandmother was left a widow when she still had children in school,” he remembered. “She didn’t have any money. So she bought a 'fish-n-chips’ shop and brought her eight children up on 'fish-n-chips’. Although my father made money, the memory of that upbringing was still heavy on the family.”

Peter’s interest in music was sparked when as a seven-year-old he began listening to a collection of operas on records kept in the family cupboard, and his enthusiasm was confirmed when he was taken to see a production of Faust.

He attended Eton College, where he joined the choir and worked his way steadily through the classical record collection. He went on to Christ Church, Oxford, to read Italian and German and while still a student he worked behind the scenes at Glyndebourne. He then studied at the Vienna Academy of Music, where he produced the Austrian premiere of Benjamin Britten’s The Rape of Lucretia. He was a production assistant with the Vienna State Opera for three years and worked as assistant producer of performances by Viennese artists at the San Carlo Opera House, Naples, at the Geneva Festival and at the Rome Opera.

Another of his interests – in the art of medieval Germany – was sparked after he was sent by his father to study German mail order businesses and improve his German. In 1957 Moores joined his father’s business, Littlewoods, becoming vice chairman in 1976 and chairman in 1977 on his father’s retirement.

But John Moores, an autocratic figure, remained on the board and found it impossible to let go of the reins; in 1980 Peter was brusquely pushed aside as chairman for failing to live up to his father’s exacting standards. John Moores resumed the chairmanship until 1982 and, although the family carried on running Littlewoods, a non-family member, John Clement, succeeded as chairman. 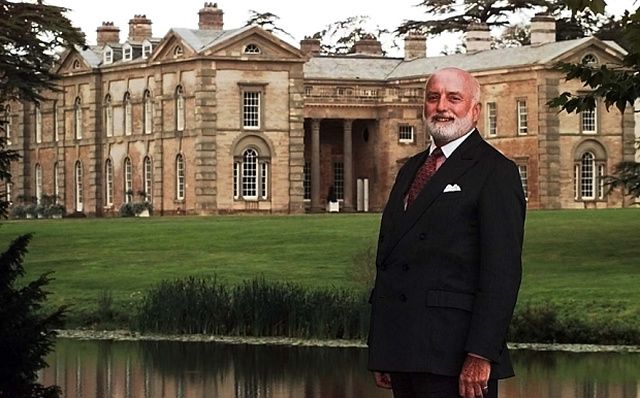 Peter Moores remained a director of Littlewoods until 1993 and at the same time worked as a director in corporate finance at the merchant bank Singer and Friedlander. But his main interests lay in his philanthropic work.

He began early. By the age of 22 he was providing scholarships to advance the careers of young singers. In 1964 he put half his money into the new Peter Moores Foundation, using its wealth to support individual artists he discovered in music and the visual arts, but also in education, health, social and environmental projects.

Among other ventures, £2 million went in 2001 to help establish undergraduate business teaching at Oxford University, funding the directorship of Oxford’s School of Management (later the Saïd Business School) and a Peter Moores Professorship of Management Studies. A further £1.9 million went to fund a Peter Moores Lecturership in Chinese Business Studies – a reflection of Moores’s personal interest in things Chinese and his belief that “if Europe doesn’t get itself up-to-date with China, and how China thinks, and how China acts then it’s going to be down the drain in 40 years time”.

The foundation was wound down 50 years later. It was time, Moores said, for a new generation of philanthropists to “take up the baton”.