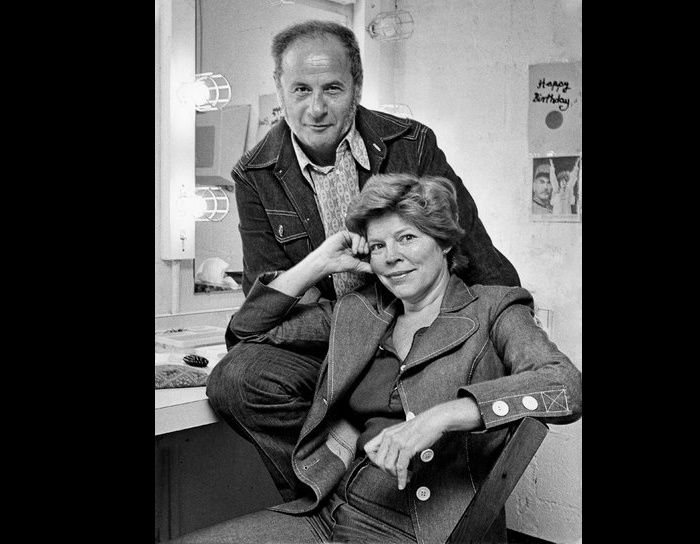 The volatility that characterized much of Ms. Jackson and Mr. Wallach’s stage work often carried over into their dressing rooms. The couple in 1973

Anne Jackson, a distinguished star of the stage who was half of one of America’s best-known acting couples, sharing much of a long and distinguished career with her husband, Eli Wallach, died on Tuesday at her home in Manhattan. She was 90.

Her death was confirmed by her daughter Katherine Wallach.

If not quite on the same level of stardom as Alfred Lunt and Lynn Fontanne or Hume Cronyn and Jessica Tandy, Ms. Jackson and Mr. Wallach came close. From the early 1950s to 2000, when they starred Off Broadway in Anne Meara’s comedy “Down the Garden Paths,” they captivated audiences with their onstage synergy, displaying the tense affections and sizzling battles of two old pros who knew both how to love and how to fight.

Ms. Jackson, who had endured a difficult life growing up in Brooklyn, carved out an impressive stage career of her own. Critics hailed her range and the subtlety of her characterizations — including all the women, from a middle-aged matron to a grandmother, in David V. Robison’s “Promenade, All!” (1972) — and a housewife verging on hysteria in Alan Ayckbourn’s “Absent Friends” (1977).

She was nominated for a Tony Award for her performance as the daughter of a manufacturer, played by Edward G. Robinson, in Paddy Chayefsky’s “Middle of the Night” (1956).

But she was best known for her work with Mr. Wallach, who died in 2014. Together they appeared in classics by Shaw and Chekhov; in dramas by Tennessee Williams and Eugène Ionesco; and, perhaps most notably, in offbeat comedies by Murray Schisgal.

They both won Obie Awards for their work in Mr. Schisgal’s 1963 Off Broadway double bill, “The Typists” and “The Tiger.” They also starred in his hit 1964 Broadway comedy, “Luv,” directed by Mike Nichols, which ran 901 performances and won three Tony Awards, and in another pair of Schisgal one-acts, “Twice Around the Park,” on Broadway in 1982.

Reviewing “Twice Around the Park” in The New York Times, Frank Rich wrote: “It would be absurd to think of a more perfect Schisgal woman (or maybe even a more perfect woman) than Miss Jackson — who is cool, poised and intelligent except on those occasions when she crumbles to the floor to demand that Mr. Wallach give her a sound kicking. (Don’t worry: Miss Jackson doesn’t deserve the punishment, and Mr. Wallach, deep down, is far too kind to deliver it.)” Alan Arkin, Eli Wallach and Anne Jackson, with the director Mike Nichols, preparing for the opening of “Luv” in 1964

Ms. Jackson and Mr. Wallach appeared together 13 times on Broadway, seven times Off Broadway, and occasionally in movies and on television, where they did most of their work (both together and apart) in the later years of their careers.

The volatility that characterized much of Ms. Jackson and Mr. Wallach’s stage work often carried over into their dressing rooms, with life imitating art over some technique or timing in a performance. Friends called it candid shoptalk by perfectionists who respected each other intellectually, emotionally and professionally.

Life in the Jackson-Wallach apartment on Riverside Drive was also a turbulent affair: a juggling of finances and schedules to meet the demands of show business, marriage and parenthood — raising three children in the competitive wilds of Manhattan. They hired help, tried to smooth frictions with gruff tact and bought a weekend home in East Hampton, N.Y., to get away from it all.

In 1979, Ms. Jackson published a memoir that surprised critics. It was not about her career and had no spicy gossip or self-promotional revelations. The book, “Early Stages,” was instead a frank examination of her childhood and the years of turmoil that formed her, ending poignantly with the deaths of her parents.

“She writes of it vividly, sensitively, modestly,” Seymour Peck wrote in a review for The New York Times. “She cherishes it: this family nurtured her, gave her the strength, let her go on to become an actress, somehow prepared her for her own good marriage (to Eli Wallach) and for motherhood.”

She also examined her early days with Mr. Wallach. “We had a lot in common,” she wrote. “Neither of us could sing; both of us loved to act; we were both ambitious and idealistic; and we endowed each other with the most extraordinary virtues.”

Anna Jane Jackson was born on Sept. 3, 1925, in Millvale, Pa., near Pittsburgh, the youngest of three daughters of John Jackson, a Croatian immigrant barber and an avowed Communist, and the former Stella Murray, the Irish Catholic daughter of a coal miner.

When Anna was 7, the family moved to Brooklyn, where she slept on a parlor couch with elevated trains pounding past the window and her mismatched parents battled endlessly. She became a troublemaker and a thief and once threatened to jump out a window unless she was given movie money.

Movies were her escape. By age 11, she could do impressions of Charles Laughton, Spencer Tracy, Katharine Hepburn, Shirley Temple and Jeanette MacDonald. She excelled in drama in high school, won a talent contest and took acting lessons. Ms. Jackson with Jason Fraser in Jean Giraudoux’s “Madwoman of Chaillot” Off Broadway in 2001. She was nominated for a Tony Award for Paddy Chayefsky’s “Middle of the Night” (1956)

Her mother suffered a breakdown when Anna was 14 and spent the rest of her life in mental institutions.

Ms. Jackson attended Franklin K. Lane High School and delivered monologues at assemblies under the guidance of a teacher who recognized her acting potential. After graduating in 1943, she studied drama at what was then the New School for Social Research, won a talent contest and spent 16 weeks in Eva Le Gallienne’s touring production of Chekhov’s “The Cherry Orchard.”

She met Mr. Wallach, 10 years her senior, in 1946, when they were both cast in a production of Tennessee Williams’s “This Property Is Condemned.” They joined Le Gallienne’s American Repertory Theater on Broadway, appearing in “Henry VIII,” “Androcles and the Lion” and “What Every Woman Knows,” and married in 1948.

For years, the couple studied Method acting with Lee Strasberg, who also taught Anne Bancroft, Montgomery Clift, James Dean and Marilyn Monroe (who worked for the Wallachs as a babysitter). And for a dozen years, they lived in Greenwich Village, where for a time Ms. Jackson could often be seen pushing a baby carriage in Washington Square while raising the couple’s son and two daughters.

Both survive their mother, along with her son, Peter; a sister, Beatrice Marz; three grandchildren; and a great-grandson.

Ms. Jackson appeared frequently on television in the golden age of live drama, on “Armstrong Circle Theater,” “Robert Montgomery Presents” and other anthology shows. She was also seen on “Gunsmoke,” “The Defenders” and, later in her career, “Law & Order” and “ER.” Her movies included “The Shining” (1980) and “Funny About Love” (1990).

Mr. Wallach received an honorary Academy Award for lifetime achievement in 2010. “Lifetime achievement?” Ms. Jackson said at a crowded celebration in Los Angeles. “Oh, my God. He’s still learning. And this leads me to the truth of the matter: I taught him everything he knows.”