Noreen M. Corcoran (October 20, 1943 – January 15, 2016) was an American actress, dancer, and singer best known for her co-starring role in the television sitcom Bachelor Father, as the teenager Kelly Gregg, the niece of wealthy attorney Bentley Gregg, played by John Forsythe. 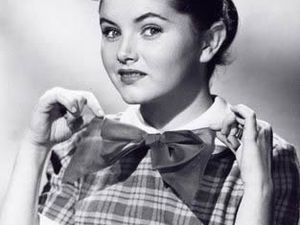 Corcoran was the third of eight children born in Quincy, Massachusetts, to William "Bill" Corcoran, Sr. (1905–1958), and the former Kathleen McKenney (1917–1972). In 1947, the Corcorans moved to Santa Monica, California, where the father became the maintenance chief at Metro-Goldwyn-Mayer. The Corcoran children studied dramatics or dance as a means to launch potential acting careers. During the 1950s, Noreen's younger brother Kevin Corcoran gained fame in the role of Moochie on Walt Disney's The Adventures of Spin and Marty with Tim Considine and David Stollery, and in the serial Moochie of the Little League on Walt Disney Presents. Several of Noreen and Kevin's siblings, including Kelly (1958-2002), were actors. After going to Notre Dame Academy and Providence High School, Corcoran attended California State University from 1962 to 1964 but did not graduate.

Corcoran's screen debut was a small role in the emotional film, Wait 'Til the Sun Shines, Nellie at 20th Century Fox. She was next cast in the MGM musical I Love Melvin in 1953. More roles followed, including the role of "Anna," the girl who was granted another birthday in "Tusitala," a 1955 Four Star Playhouse production starring David Niven as Robert Louis Stevenson, Band of Angels in 1957, and television appearances in Circus Boy, starring Micky Dolenz, later of the singing group The Monkees. Noreen also had a part in the short-lived series The World of Mr. Sweeney with Charles Ruggles. In 1957, future U.S. President Ronald W. Reagan, who was working at the same studio on his General Electric Theater on CBS, viewed the screen tests for Bachelor Father and recommended Corcoran to John Forsythe for the part of Kelly. In the show, Kelly (Corcoran) is orphaned at thirteen when her parents are killed in an automobile accident and she is then adopted and reared by her bachelor Uncle Bentley (Forsythe) in well-to-do Beverly Hills, California.

As a popular young actress, Corcoran made the cover of numerous magazines. Slowly before the viewers' eyes, she seemed to grow from a somewhat awkward teenager into a sophisticated young woman. Kelly had enrolled in the same college Bentley attended and was a freshman there during the series final season (1961-1962). In mostly season 1 & 2 story lines, Kelly often acted as an unwelcome matchmaker for her Uncle Bentley. A year after the completion of Bachelor Father (1963), Corcoran achieved some musical success as her single recording of "Love Kitten" reached #142 in Music Vendor (October 1963). In 1963, Corcoran played a supporting role in Paul Wendkos' Gidget Goes to Rome and starred in William Witney's The Girls on the Beach, an attempt by Paramount Pictures to compete in the "Beach Party" genre of films, which had been particularly successful for Annette Funicello and Frankie Avalon. The movie featured performances from the popular singer Lesley Gore, The Beach Boys, and The Crickets (after the death of Buddy Holly). Corcoran did not sing in the movie.

Corcoran guest-starred in two similar television series, NBC's Mr. Novak with James Franciscus and ABC's Channing with Jason Evers. She guest starred at this time on the ABC drama series, Going My Way, starring Gene Kelly. In 1964, she was cast as Alice Lang in NBC's medical drama about psychiatry, The Eleventh Hour in the episode "You're So Smart, Why Can't You Be Good?" Then she appeared in two westerns, CBS's Gunsmoke with James Arness in the 1964 episode "Owney Tupper Had a Daughter" with fellow guest star Jay C. Flippen, and ABC's The Big Valley with Barbara Stanwyck. In the latter, she played "Sharon" in a 1965 episode entitled "The Brawlers". Noreen Corcoran left acting for a private career behind the scenes in theatre arts and dance. In 1966, she began an 11-year association with the Lewitzky Dance Company, which was opened that year by the renowned choreographer Bella Lewitzky. Corcoran retired in 2004.

Corcoran's sister, Donna Corcoran, earned a speaking role in the 1951 film Angels in the Outfield. She never married. Corcoran maintained contact with her friend and mentor John Forsythe until his death. Her brother Kevin died on October 6, 2015, three months before her passing. Corcoran died at Valley Presbyterian Hospital in Van Nuys, California, of cardiopulmonary disease on January 15, 2016, at age 72. She was survived by two sisters, Donna and Kerry, and a niece.