War hero Roy Vickerman, 90, popped question to Nora Jackson in 1944 but called it off as he struggled to cope with shell-shock. 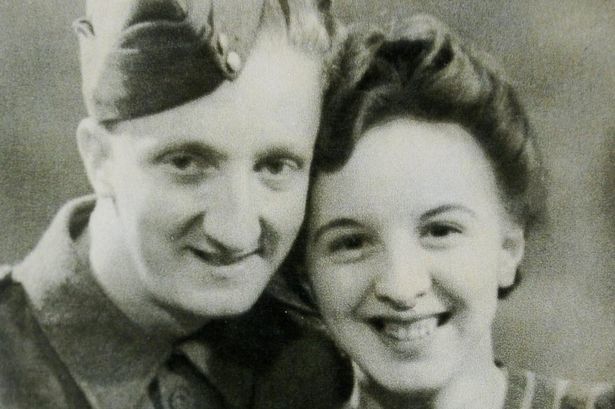 A war hero is set to marry his first love – 70 years after calling off their first engagment.

And romantic Roy Vickerman, 90, has given bride-to-be Nora Jackson, 89, the same ring she wore when he proposed back in 1944.

Two years later their wedding plans were shattered as the D-Day veteran struggled to cope with shell-shock.

But he never forgot Nora and decades later decided to apologise for breaking-up with her.

He discovered she was living just two miles away and after plucking up the courage to knock on her door, he was greeted with a loving hug from his former sweetheart. He said: “I thought about it for a week. I got into a taxi with a big bunch of flowers and I told the driver to wait for me. I said I would only be a couple of minutes.

“She had no idea I was coming round.

“When I rang the doorbell I saw Nora through the curtains.

“She came to the door and said ‘Oh, Roy’. She put her arms around me and gave me a kiss and said ‘Hold me’.

“That moment was fantastic. Four hours later I had to tell the taxi driver I was staying.

“We use the same shops and even go to the same chiropodist but in all that time we’ve never bumped into each other. Roy Vickerman was shot by a Nazi sniper in 1945

“It’s so clear in my mind. I heard the bell and I opened the curtain a little bit. I was so taken aback.

“I knew him straight away but I never thought I would see him again. He had changed a lot but I could still recognise him.

“We put our arms around one another and we went into the living room and sat and talked for hours.

“It was a shock to see him because it had been such a long time but it was lovely. It was just like old times.

“I did think about him over the years, in fact I dreamed about him a few times.”

Roy repeated the exact words of his first wedding proposal when asking Nora Jackson for her a hand in marriage a second time around.

He said: "The first time I did it I asked her mum and dad if it would be all right to ask her for her hand and they said yes.

Roy and Nora will tie the knot in the summer

"It is a 22-carat gold ring. It has three stones - two diamonds and a ruby in the centre. I paid for it with my savings, most of which I earned as a window dresser and through other jobs.

"I proposed when we were sitting on the sofa at her mum's house. I went down on one knee and said: 'Would you accept this ring as a proposal of marriage?' and she smiled and said 'yes'.

"I repeated the same words when I asked her the second time. Luckily her response was the same."

Speaking about the break-up, Nora said: "I felt really bad about giving back the ring. I've always regretted it.

"It was devastating to see Roy like that after he came back from the war and feeling like I wasn't able to help him.

"It was such a hard time and it must have been really difficult for him.

"I firmly believe us coming back together that day was the Lord's will. That he should find me and come here, it made me feel so happy." 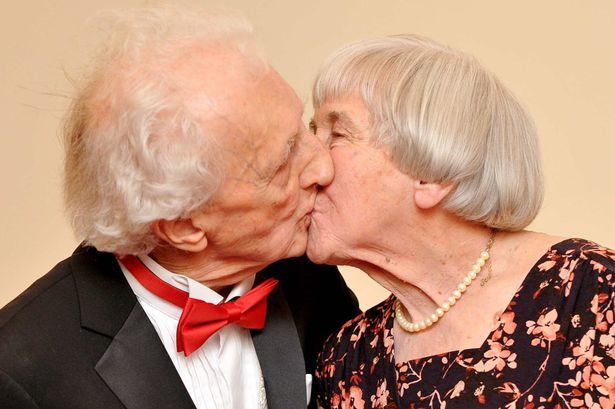 The couple first met as teenagers in 1940 at school Stoke-on-Trent, where they both still live

They were engaged in 1944, a week before Roy took part in the D-Day Normandy Landings.

While serving with the Black Watch and the Highland Light Infantry he was shot by a Nazi sniper during the Allied invasion of Germany in 1945.

When he returned to England he required reconstructive surgery and developed shell-shock - now known as Post Traumatic Stress Disorder - which led to the breakdown of his relationship.

After they split Roy married German immigrant Johanna Bentley and they went on to have two children together before she died in 2012, aged 90.

Meanwhile Nora married Bill Jackson, who died aged 78 in 2002. They had two children together and two grandchildren.

Now they are planning a summer wedding after retired architect Roy proposed to her surrounded by friends and family at the Merrion Hotel in Llandudno, Wales, on his birthday last month.

He gave her the original engagement ring he first gave her in 1944.

He said: “She knew I was going to propose because it was the original ring but the guests didn’t know.

“I didn’t go down on one knee because I wouldn’t get up again, but we had the first dance."