Wing Commander Len Ratcliff , who has died aged 96, flew agents into occupied Europe and was one of the RAF’s most decorated special duties pilots.

Ratcliff was an experienced bomber pilot and instructor when he joined No 161 Squadron at the secret RAF airfield at Tempsford in June 1943. Initially he flew the four-engine Halifax, dropping supplies and agents into France, Denmark and Norway at night. On one occasion he was crossing the French coast when one of the aircraft’s engines failed but he decided to press on. He found the dropping zone near Mâcon, north of Lyon, and dropped two agents and two packages from a height of

600 ft. With daylight approaching, he headed for Algeria where the dead engine was replaced before he returned to his base.

Later in the year, Ratcliff flew to a field east of Bordeaux and dropped Yvonne Cormeau, codename “Annette”, one of SOE’s most successful wireless operators, whose exploits were immortalised in the 2001 film Charlotte Grey.

In December 1943 Ratcliff was awarded a Bar to an earlier DFC for his “unfailing devotion to duty” and a month later took command of the squadron’s new Hudson Flight. He flew his first sortie almost immediately and landed in a field near Angers with an SOE officer who was to bring back Henri Dericourt – suspected of being a double agent – for interrogation. Dericourt became suspicious and persuaded the SOE officer that he had to secure a new landing ground and Ratcliff returned with eight agents but not with Dericourt. A Lysander picked up the agent a week later.

When landing fields were unavailable, agents were parachuted from the Hudson. In February Ratcliff dropped the SOE agent Wing Commander FFE Yeo-Thomas (known to the Gestapo as “The White Rabbit”) who was later captured but survived and was subsequently awarded the George Cross.

In April Ratcliff took command of the Lysander flight. The single-engine, black painted aircraft was capable of very short take offs and landings making it ideal for the hazardous operations. Flying alone, the pilot had to carry out precise navigation in order to find the small fields lit only by a handful of torches held by the reception party. 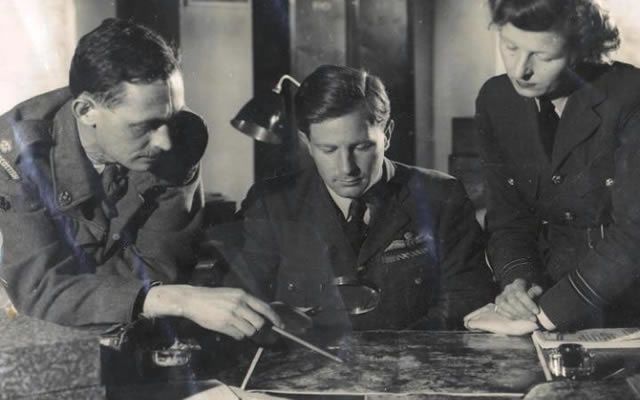 Ratcliff (centre) studying a photograph to select a dropping zone

On the night of April 28/29 he took three agents to a remote area near Chartres and on May 9 he flew one of three Lysanders to a field near Touraine taking in two agents and returning with three. The three aircraft flew independently to a landmark on the River Cher, arriving within three minutes of each other. Ratcliff headed for the rough airstrip, identified the coded flashing signal and landed. He was airborne again within five minutes allowing the second aircraft to land. After almost six hours he arrived back in England.

A month later Ratcliff had completed 40 special duties flights and was rested when he was awarded the DSO. The sensitive nature of his work prevented a detailed citation being published.

Leonard Fitch Ratcliff was born at Maldon, Essex, on July 27 1919. He joined the RAF Volunteer Reserve in June 1939 and trained as a pilot.

In July 1941 he was posted to fly the Hampden. New pilots flew their first sorties in the twin-engine bomber as the navigator so Ratcliff attended a brief navigation course, which was to stand him in good stead later when he flew his clandestine operations over France alone.

He joined No 49 Squadron at Scampton, near Lincoln, in July 1941. Over the next six months he flew 30 operations, the majority to industrial targets in the Ruhr and to Hamburg. He also flew operations to drop mines in the entrances to occupied ports and river estuaries in Germany, the Netherlands and France.

On the night of December 28 night fighters intercepted his aircraft as he headed for the synthetic rubber plant at Huls. He skilfully evaded the attackers and went on to the target. A few weeks later he was attacking the German capital ships at Brest when he was again intercepted but his evasive action allowed his gunners to frustrate the attacks of the two enemy fighters. At the end of his tour he was awarded the DFC for “setting a very valuable example”.

After leaving No 49 Squadron Ratcliff spent a year as a bombing instructor when his service was recognised with the award of the AFC.

Ratcliff’s long tour with No 161 Squadron came to an end in October 1944 when he was posted to the Air Ministry’s Directorate of Intelligence where he dealt with the clandestine activities carried out in occupied Europe.

In February 1945, he returned to Tempsford as a wing commander in charge of operations but, following the loss of No 161’s commanding officer on operations, he assumed command of the squadron until the end of the war when there was no further requirement for such a unit. He left the RAF in December 1945.

The French Government awarded him the Croix de Guerre (with Palm) and later he was invested as a Chevalier of the Legion d’Honneur. He also added the Air Efficiency Award to his British decorations.

After the war Ratcliff settled in Essex. He was a successful grain merchant, gradually expanding his business before becoming a director of Spillers. He was appointed High Sheriff of Essex in 1988 and he made a major contribution to the life of Halstead. In 1948 he was a founder member of the Halstead Rotary Club, which he supported all his life.

In 1985 he became chairman of the League of Friends of Halstead Hospital. In recognition of his long service and fund-raising activities, a rehabilitation centre at the hospital was named the Leonard Ratcliff Building in 2015.

A modest, unassuming man, Ratcliff maintained close contact with his fellow RAF special duties colleagues. In 2010 he was invited by the French authorities to help dedicate the Musee de la Resistance et de la Deportation in the town of Bourges close to where he had once landed agents.

In May 2015 Len Ratcliff was a special guest at a Tempsford commemoration where he spoke of his wartime experiences.

He married Betty Stewart in 1939. She predeceased him. He is survived by his second wife, Dorothy, and three sons and a daughter from his first marriage.