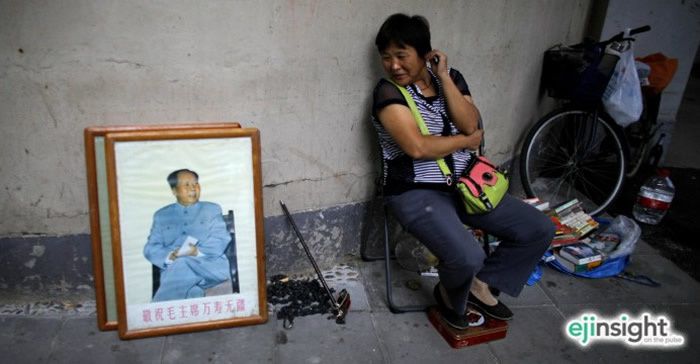 A woman admires a photo of Mao Zedong. Mao once boasted that Qinshihuang, who burried 460 intellectuals alive, was nothing compared to him

Widely regarded as the party’s ultimate verdict on the 10-year Cultural Revolution and its key players, the resolution was passed unanimously on June 27, 1981 by the sixth plenary session of the 11th Central Committee of the Chinese Communist Party

The document denounces the Cultural Revolution as “a political disaster of biblical proportions that threw the country into disarray and destroyed the lives of tens of millions of people”.

It also concludes that such a disaster could have been avoided if not for a series of fatal mistakes by the party leadership.

However, it avoids mentioning the role of Mao Zedong and blames the disaster on the Gang of Four.

The backers of the resolution feared that holding Mao accountable could undermine the party’s credibility and weaken its legitimacy.

The resolution flies in the face of several recently declassified party documents and newly published memoirs.

They reveal for the first time that between October and November 1980, seven months before the sixth plenary session, the central committee had called a secret meeting to decide the wording of the final draft of the document.

Most off the 5,000 party delegates from across the country who attended the meeting denounced Mao in no uncertain terms.

This suggests that although Deng Xiaoping had pulled his punches on Mao in the 1981 party resolution out of political concerns, most senior Communist Party members had reached consensus behind closed doors that Mao was to blame for the Cultural Revolution and that the Gang of Four were merely his proxies.

Records of that meeting were kept secret until recently when some details emerged.

These records show that Mao was criticized by party delegates for “extreme leftist hysteria” and for his obsession with class struggle and personality cult.

He was denounced for his reckless Great Leap Forward economic policy that led to famine across the country.

Li Wei-han, a party elder who were among those who attended the meeting, described Mao as a “rural redneck” who didn’t know a thing about scientific socialism, industry and economics.

Former defense chief Zhang Aiping said Mao saw himself as a modern-day Qinshihuang, the emperor who unified China in 220 B.C.

Another delegate, Fang Yi, a seasoned party stalwart and former personal secretary of the late premier Zhou Enlai, referred to Mao as the “biggest tyrant in the history of China”.

And Deng Xiaoping once described the Cultural Revolution and the Great Leap Forward as a “dark age” for China.

These criticisms are largely well founded and accurate.

Mao was indeed a hybrid of Stalin and Qinshihuang, the personification of tyranny and terror.

In fact, Mao publicly compared himself to Qinshihuang and often bragged about having outdone him in killing people.

For example, at a central committee meeting in May 1958, Mao boasted that “Qinshihuang is nothing compared to me. He only buried 460 intellectuals alive. I buried 46,000 of them. I outdid him 100 times.”

Has China learned from the mistakes of Mao or Qinshihuang, or is there a resurgence of extreme leftist elements and personality cult that is pushing the country further and further away from reason and rationality?