MUNICH — The inner workings of the Nazi power structure have remained an object of fascination and speculation. Now, one of the last surviving witnesses has described her experiences in detail, in a documentary that had its German premiere last month at the Munich Film Festival here. The film, “A German Life,” tells the story of Brunhilde Pomsel, who was a secretary to the Nazi propaganda minister, Joseph Goebbels. In it, Ms. Pomsel, who is 105 years old, offers an unflinching glimpse into the mentality of a “normal German” during the Nazi era, someone who worked within the system for personal advancement and now wrestles with her complicity.

“Is it bad, is it egoistic when people who have been placed in certain positions try to do something that is beneficial for them, even when they know that by doing so they end up harming someone else?” Ms. Pomsel asks in the opening of the film. Elsewhere, she describes herself as “one of the cowards,” someone who was too “dumb” and “superficial” to grasp what was going on around her.

Born in Berlin in 1911, Ms. Pomsel worked as a stenographer for a Jewish lawyer and as a typist for a rightist nationalist — at one point working for both simultaneously. In 1933, a friend in the Nazi Party got her a job in the news department of the Third Reich’s broadcasting station, and in 1942 she was transferred to the Ministry of Public Enlightenment and Propaganda, where she worked under Goebbels as a shorthand writer until the end of the war. After the fall of Berlin in 1945, she was imprisoned by the Russians until 1950.

Though she has spoken on a few occasions to the news media since her return to Germany, she was reluctant to open up when approached by the filmmaking team in 2012.

“I was a little bit afraid of the whole thing,” Ms. Pomsel said in an interview conducted in German in Munich last month. But, she added, “They told me that they were preparing something for perpetuity for which certain things needed to be recorded, and I thought that made sense.”

“Many people — the press, novelists — have been willing to report from their perspectives,” she said. “Now it was my turn.”

She joined the Nazi Party in 1942 only to qualify for the prestigious, well-paid posting at the ministry, she said.

Ms. Pomsel remembers Goebbels, one of Hitler’s most trusted ministers and the mastermind of the Third Reich’s viciously anti-Semitic propaganda machine, as “well kept” and “good looking,” but above all as “an outstanding actor.” No one, she says in the film, “could have been better than he at transforming from a civilized, serious person into that ranting and raving hooligan.”

As one of four secretaries posted in an antechamber to Goebbels’s office, Ms. Pomsel attended to ministerial bureaucracy, typing and filing paperwork. She recalls letting Goebbels’s “happy children” play with her typewriter and once attended a dinner at his villa. In the Reich’s final hours, Goebbels and his wife committed suicide after killing all six of their children.

Though she witnessed Goebbels’s “total war” speech of 1943, just after the German defeat at Stalingrad, in which he called for “a war more total and radical than anything that we can even imagine today,” Ms. Pomsel said she “didn’t even realize what the speech was all about.”

“I just didn’t listen,” she said in the interview in Munich. “Because it didn’t interest me. That was a stupidity within me, I know this now.” 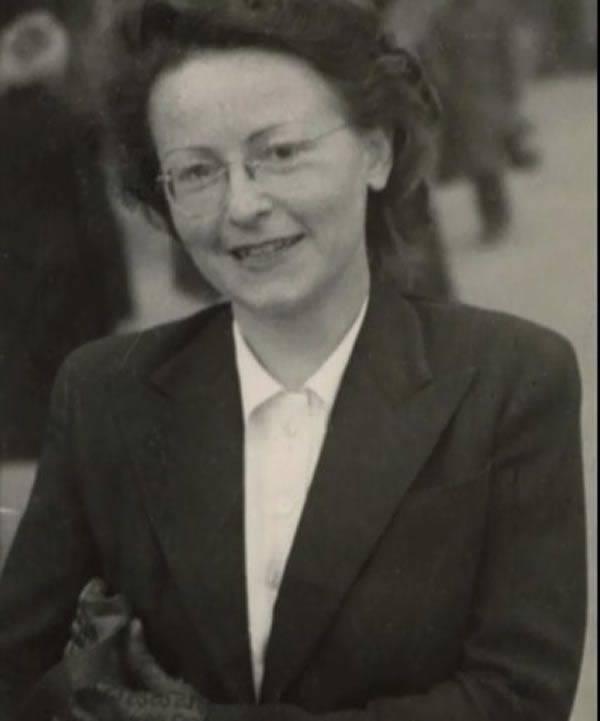 After her incarceration, Ms. Pomsel worked in German broadcasting until retiring in 1971.

She said in the interview that she never had access to information about Nazi war crimes or mass killings, and that she learned of the gas chambers and crematories only after her release.

“We knew that Buchenwald existed,” she said, but believed it was a correctional facility. “We knew it as a camp. We knew Jews went there.”

“I witnessed the deportation of Jews from Berlin,” she said, “but it was explained to us that in the East there was a flood of refugees from what would become Yugoslavia and so on, and that they were coming into Germany. They were abandoning their farms, their fields, which must be maintained. And then the Jews would come!”

In “A German Life,” Ms. Pomsel appears against a black background in extreme close-up. Interview footage is interspersed with quotations from Goebbels as well as archival material, much of it previously unreleased, from the United States Holocaust Memorial Museum in Washington and the Steven Spielberg Film and Video Archive.

Ms. Pomsel struggles to describe her responsibility. “No, I wouldn’t see myself as being guilty,” she says at one point in the film. “Unless you end up blaming the entire German population for ultimately enabling that government to take control. That was all of us. Including me.”

Yet she admits to “a bit of a guilty conscience,” and laments “indifference and shortsightedness.” She questions her upbringing, “this Prussian something to follow the rules but, at the same time, to also cheat a bit, to lie or put the blame on someone else.”

She dismisses those who would judge her.

“The people who today say they would have done more for those poor, persecuted Jews,” she says, “I really believe that they sincerely mean it. But they wouldn’t have done it, either. By then the whole country was under some kind of a dome. We ourselves were all inside a huge concentration camp.”

Ms. Pomsel’s lack of hand-wringing is precisely why the filmmakers found her testimony valuable and credible.

“You can believe her,” said Florian Weigensamer, one of the film’s four directors. “Because so many people are hiding behind these false regrets.”

“She was not an avid Nazi,” he added. “She just didn’t care and looked away. That’s what I think makes her guilty.”

Ms. Pomsel’s personal guilt was not the directors’ main focus, they said. At a time when rightist populism is on the rise in Europe, they want the film, which they hope will open in European and American theaters in the fall, to be a reminder of the human capacity for complacency and denial. “A German Life’’ is being shown this month at the Jerusalem Film Festival and the San Francisco Jewish Film Festival.

“The dangers are still alive. It could happen again,” another of the directors, Olaf Müller, said “One of the main aims of the film is to have the audience question: How would I have reacted? What would I have done in her situation for a new step in my career?”

Ms. Pomsel watched the German premiere, and said of the film, “I found parts of it terribly gripping — not so much my own destiny, because that’s behind me.

“But as it reached some final points, it really took hold of me physically,” she said. “I was gripped as if it were brand new, even though I knew everything already.”