President Donald Trump moved at a blistering pace to fulfill several campaign promises during his first week in the White House. At the other end of Pennsylvania Avenue, however, 13 of his Cabinet nominees continue to wait for confirmation votes.

Obama had 11 of his 15 Cabinet secretaries in place after his first week. Trump has two.

Trump begins his second week with the same number of Cabinet secretaries as last week: two. That number should at least double by Tuesday after the Senate votes to confirm Rex Tillerson for secretary of state and Elaine Chao for secretary of transportation.

It’s also a sharp contrast from President Barack Obama’s early days. Trump’s Democrat predecessor had 11 of his 15 Cabinet secretaries in place after his first week (including Robert Gates, who remained as defense secretary from the prior administration).

Five of the past six presidents—Jimmy Carter, Ronald Reagan, Bill Clinton, George W. Bush, and Obama—had nearly their entire Cabinet installed by their second week in the White House. President George H.W. Bush faced delays, but he had the advantage of retaining three of Reagan’s Cabinet secretaries. This week’s planned confirmation votes on Tillerson and Chao, coupled with committee action on several other nominees, should generate some movement after the GOP-controlled Senate made little progress last week. (See list at bottom for this week’s schedule.)

Last week, Republicans left town for a three-day retreat in Philadelphia, but they did confirm two non-Cabinet officials: Mike Pompeo to lead the CIA and Nikki Haley as U.S. ambassador to the United Nations. On Jan. 20, Inauguration Day, the Senate approved James Mattis for defense secretary and John Kelly for homeland security secretary.

Democrats have vowed to mount a fight against at least eight of Trump’s nominees, including Tillerson. Due to a rules change that Democrats made in 2013 while they were in the majority, however, they lack the votes to ultimately defeat Trump’s nominees. It now takes a simple majority to confirm nominees, and Republicans control 52 seats compared to the Democrats’ 48. Senate Minority Leader Chuck Schumer still can employ delaying tactics, though.

>>> Democrats Don’t Have Votes to Defeat Trump Nominees, but They Can Delay Them

Such delays could stall the Trump administration’s ability to implement policies or carry out executive orders, said Don Devine, director of the Office of Personnel Management under Reagan.

“This is a president who wants change, and he has got to get his nominees confirmed as soon as possible if he is going to get that change,” Devine told The Daily Signal.

Continuity of government is usually not a problem, but implementing the president’s agenda is, said Becky Norton Dunlop, the Ronald Reagan distinguished fellow at The Heritage Foundation. Dunlop served in the Reagan administration at the White House, Justice Department, and Interior Department.

“From the standpoint of taking control of the government, it’s important for the president to employ people to act,” Dunlop told The Daily Signal. 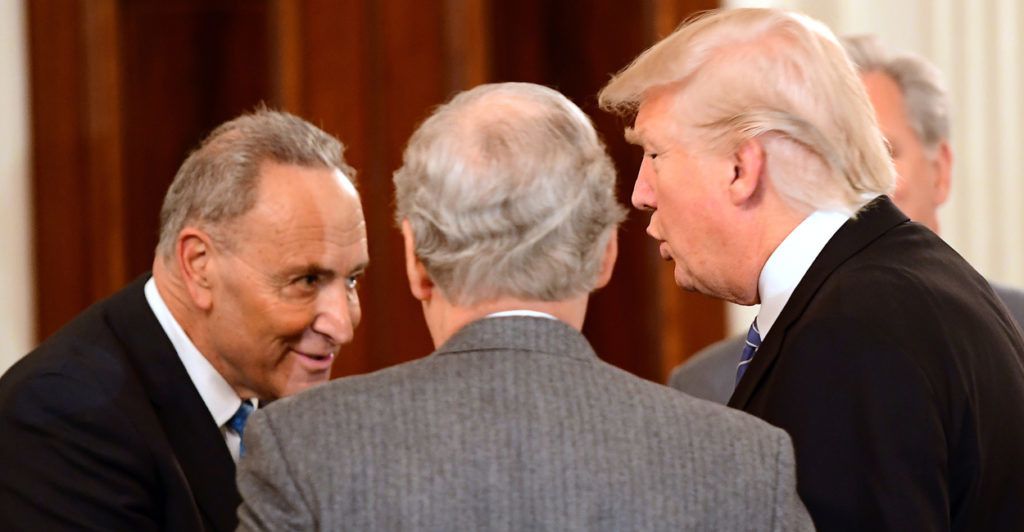 Most of Trump’s nominees ultimately will be confirmed, Dunlop said. She said this is just an effort by Schumer, D-N.Y., to curb their effectiveness. The minority leader knows that the longer it takes for Trump’s nominees to win Senate approval, the later they’ll start implementing the new president’s agenda.

“This is a way to damage these nominees that might have a more conservative agenda under President Trump and discourage them from moving forward aggressively,” Dunlop said.

For example, Tom Price, the Georgia congressman who Trump nominated to lead the Department of Health and Human Services, will play a crucial role when it comes to dismantling Obamacare.

One of Trump’s first actions directed his administration to rework the health care law’s numerous regulations. But without a secretary in place, there’s no one leading the charge at the agency.

Price, like Tillerson, is on Schumer’s list of eight nominees who Democrats oppose. The others include Betsy DeVos for education secretary, Steve Mnuchin for treasury secretary, Andrew Puzder as labor secretary, and Jeff Sessions for attorney general. Schumer’s list also includes Scott Pruitt to head the Environmental Protection Agency and Mick Mulvaney for the Office of Management and Budget, although they aren’t part of the Cabinet. Despite having 57 Democrat senators on Jan. 20, 2009, Obama’s final Cabinet secretary wasn’t confirmed until April 28 of that year. Two of his picks for commerce secretary withdrew, as did former Senate Majority Leader Tom Daschle, whom Obama picked to lead the Department of Health and Human Services.

The vacancy hampered the health agency when the swine flu outbreak occurred, recalled Tevi Troy, who served as a deputy secretary at HHS during the George W. Bush administration.

“It is a problem because these agencies are not able to be totally effective without a secretary at the top of the agency giving direction to assistant secretaries for the entire agency,” Troy told The Daily Signal.

“The tradition has been that in the first day or the first week, a lot of nominees are confirmed,” Troy said. “My view is that if a nominee is both ethical and qualified, then the Senate should defer to the president’s choice for a Cabinet nominee.”

Schedule for Week of Jan. 30

Wednesday: Senate Homeland Security and Governmental Affairs Committee vote on Mick Mulvaney for director of the Office of Management and Budget (Mulvaney also needs approval from the Senate Budget Committee).