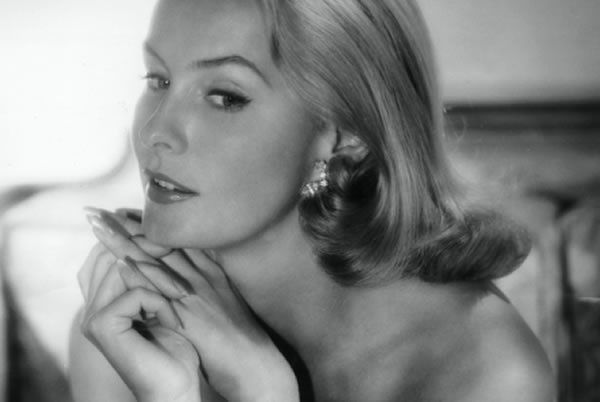 The family of Dina Merrill Hartley confirmed Tuesday morning that the actress and philanthropist, an icon of taste and sophistication in both worlds, died at home Monday in East Hampton, NY, surrounded by her family. The cause was Lewy Body dementia, the family said. She was 93.

Merrill’s remarkable career – it could aptly be described as exquisitely curated – spanned more than half a century and included memorable roles in films from the serious (Daniel Mann’s 1960 BUtterfield 8) to the comic (Blake Edwards’ 1959 Operation Petticoat); on Broadway (notably as Peggy Porter in George Abbott’s 1983 revival of his, Richard Rodgers and Lorenz Hart’s On Your Toes); and the Golden Age of live television as well as a stint as Oscar Madison’s love interest in an episode of The Odd Couple.

Yet whatever the role, Merrill rarely shed the native skin of her privileged class and breeding as an American heiress born into wealth. From her earliest years, she summered at Mar-a-Lago, the family estate in Palm Beach, FL now owned by President Donald Trump, and spent long months aboard the family yacht, Sea Cloud.

Born Nedenia Marjorie Hutton in New York City on December 29, 1923, Merrill was the only child of Post Cereals heiress Marjorie Merriweather Post and Wall Street investment broker Edward Francis “E.F.” Hutton. She adopted the stage name Dina Merrill, borrowing from Charles E. Merrill, a distant relative and a famous stockbroker like her father. During World War II, she was a member of Moss Hart’s USO troupe, performing throughout the Pacific. Merrill made her Broadway debut in John Van Druten’s The Mermaid Singing in 1945. She had a more substantial role in 1975’s revival of the drama Angel Street.

Merrill’s filmography includes more than 25 features including Desk Set (1957), The Sundowners (1960), The Young Savages (1961), The Courtship Of Eddie’s Father, and Robert Altman’s A Wedding (1978) and The Player (1992). Her 100-plus TV appearances ranged from What’s My Line? to What Makes Sammy Run? to The Magnificent Ambersons. Merrill married her second husband, actor Cliff Robertson, in 1966, and it was she who alerted her friend, Washington Post publisher and fellow aristocrat Katharine Graham, that Columbia Pictures president David Begelman had forged Robertson’s name on a $10,000 check, exposing a scandal that shook Hollywood to its core. With her third husband, Ted Hartley, Merrill merged their company, Pavilion Communications, with RKO to form RKO Pictures, which made a number of feature films including Mighty Joe Young (with Disney).

Merrill’s philanthropic work was tireless and legendary. She was a major supporter of the performing arts whose portfolio included being a founding trustee of the Eugene O’Neill Theater Center and an early director of the Paley Media Center. She served for 12 years as presidential appointee to the Board of Trustees of the John F. Kennedy Center for the Performing Arts. She was honored by Guild Hall, where she performed on stage for many summers in East Hampton by the naming of their theater and back theater spaces the Dina Merrill Pavilion. She was a trustee of the Hillwood Estate, Museum and Gardens in Washington, DC.

She was chairman of the board and director emeritus with over 50 years of service to the New York City Mission Society. When her son David was diagnosed with diabetes, Merrill founded the Juvenile Diabetes Foundation, dedicated to diabetic research. She served as the International Ambassador for ORBIS International, the flying eye hospital, which teaches advanced eye care and eye surgical techniques all over the world.

Merrill also served as a board member of the Population Resource Council and the Republican Majority for Choice Committee promoting choice for women, and was a founding vice chairman of the Pro-Choice Coalition.

In addition to her son and her husband, Merrill is survived by a daughter from her first marriage, Nina Rumbough Roosenburg; a stepson, Philippe Hartley; six grandchildren; four stepgrandchildren; and two stepgreat-grandchildren. Funeral will be private, with a public celebration to follow.