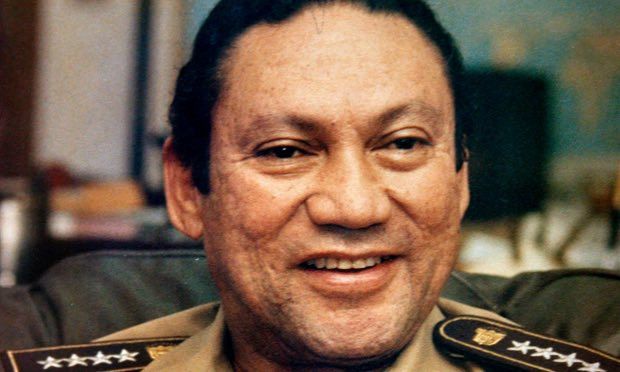 Manuel Antonio Noriega was put into an induced coma in March after brain surgery. Photograph: AP

Manuel Noriega, the former Panamanian dictator whose regime was marked by brutal repression, ultimately disastrous collusion with the CIA and the establishment of “the hemisphere’s first narcokleptocracy”, has died at the age of 83.

His death, late on Monday, was announced on Tuesday by the president of the central American country.

Juan Carlos Varela tweeted: “The death of Manuel A Noriega closes a chapter in our history; his daughters and their families deserve to bury him in peace.”

Noriega had been put into an induced coma in March after undergoing brain surgery. A government official, speaking on condition of anonymity, said Noriega died at about 11pm local time after his condition suddenly worsened.

Noriega ruled Panama from 1983 to 1989, spying for the CIA before the US invaded in 1989, toppling his repressive regime and ending a drug-trafficking career that associated him with the Colombian kingpin Pablo Escobar.

With the knowledge of US officials, Noriega formed “the hemisphere’s first narcokleptocracy”, a US Senate subcommittee report said, describing him as “the best example in recent US foreign policy of how a foreign leader is able to manipulate the United States to the detriment of our own interests”.

Aurelio Barria, who led the Cruzada Civilista (Civil Crusade) opposition movement that staged many street protests against Noriega’s regime, said the dictator’s death “ends a period that we should try not to forget so it is not repeated in Panama”.
Carolina Cruz, a 65-year-old housewife out shopping in the capital, told the Associated Press that his demise “leaves open wounds”, adding: “Many died during his government, but he had deteriorated a lot and served many years in prison.”

Like many authoritarian Latin American figures of the latter half of the 20th century, Noriega was trained at the notorious, US-run School of the Americas, whose graduates include the disgraced former Peruvian spy chief Vladimiro Montesinos and the former Argentinian dictator Leopoldo Galtieri.

He joined Panama’s defence forces in 1962 and rose steadily through the ranks, mainly through loyalty to his mentor, Gen Omar Torrijos, who became Panama’s de facto leader after a coup in 1968.

Two years after Torrijos died in a mysterious plane crash in 1981, Noriega became the head of the armed forces and Panama’s de facto ruler. He was considered a valued CIA asset, helping the US seize drugs at sea and track money laundering in Panama’s banks, and reporting on guerrilla and terrorist activities.

His relationship with Washington eventually turned toxic, especially after a top political opponent was killed in 1985 and Noriega appeared to join forces with Latin American drug traffickers.

His foes in the Panamanian military made several coup attempts but failed, and their leaders were summarily executed by firing squad.

The beginning of his downfall came in 1988 when federal grand juries in the Florida cities of Miami and Tampa indicted Noriega on drug-trafficking charges.

Initially he reacted with defiance, thumbing his nose at US economic sanctions designed to drive him from power. He famously waved a machete at a rally while vowing not to leave, and in 1989 he nullified elections that observers say were easily won by the opposition.

The US president George HW Bush ordered the invasion of Panama in December 1989, and Noriega was captured and taken to Miami. During the operation, 23 US military personnel died and 320 were wounded, and the Pentagon estimated 200 Panamanian civilians and 314 soldiers were killed. A defiant Noriega in Panama in October 1989, and in captivity in Miami in January 1990. Photograph: DSK/AFP/Getty Images

Prosecutors accused Noriega of helping Colombia’s Medellín cocaine cartel ship “tonnes and tonnes of a deadly white powder” to the US. The defence cited court documents describing him as the “CIA’s man in Panama” and argued that the indictment “smells all the way from here to Washington”.

In April 1992, jurors convicted Noriega on eight of 10 charges. On the judge’s instructions, they were told not to consider the political side of the case, including whether the US had the right to invade Panama and bring Noriega to trial in the first place.

During his years at a minimum-security federal prison outside Miami, Noriega was afforded special treatment and was allowed to wear his Panamanian military uniform and insignia when in court. He lived in a bungalow apart from other inmates and had his own television and exercise equipment. He was said to be an avid follower of the news and a voracious reader about politics and current events.

After completing his 17-year sentence in 2007, Noriega was extradited to France and received a seven-year sentence for money laundering.

Panama wanted Noriega to return to face in-absentia convictions and two prison terms of 20 years for embezzlement, corruption and murder of opponents, including the military commander Moises Giroldi, who led a failed rebellion on 3 October 1989, and Hugo Spadafora, whose decapitated body was found in a mailbag on the border with Costa Rica in 1985. In mid-2011, France approved his extradition to Panama.

Despite amassing great wealth, Noriega had worked hard to cultivate an image of a man of the people. “The humble, the poor, the blacks, they are the utmost authority,” Noriega said in one speech. He lived in a modest, two-storey home in an upper-middle-class neighbourhood in Panama City that stood in stark contrast with the opulent mansions customary among Latin American dictators. Noriega walks with supporters in the Chorrilo neighbourhood of Panama City in 1989. Photograph: John Hopper/AP

“He would only say ‘hello’ very respectfully,” said German Sánchez, who lived next door for 16 years. “You may think what you like of Noriega, but we can’t say he was anything but respectful toward his neighbours.”

While resentment lingers over the US invasion, Noriega has so few supporters in modern-day Panama that attempts to auction off his old home attracted no bidders and the government decided to demolish the decaying building. Late in life, he had zero influence over his country from behind bars.

Noriega broke a long silence in June 2015 when he made a statement from prison on Panamanian television in which he asked for forgiveness from those harmed by his regime. He apologised to anybody who “felt offended, affected, hurt or humiliated by my actions”, adding: “I feel that as Christians we all have to forgive. The Panamanian people have already overcome this period of dictatorship.”

For the most part, however, Noriega remained silent about the elite military and civilian associates who prospered through the corruption he helped create, and which still plagues the central American nation, a favoured trans-shipment point for drugs and a haven for money laundering. Last year, doctors detected the rapid growth of a benign brain tumour that had first been spotted in 2012. In January this year, a court granted him house arrest as he prepared for surgery on the tumour.

He is survived by his wife, Felicidad, and daughters Lorena, Thays and Sandra.