While on the train from Paris to Berlin in 1937, he saw a lion-shaped cloud facing towards Germany. During a visit to the Berlin Zoo, a zookeeper allowed him to pat a lion cub on the head. While reading the bible aloud, he kept stumbling onto passages that mentioned lions.

“The lion has appeared over and over again,” he wrote in his diary.

For the 62-year-old King, it was as clear a sign as any that his visit with Adolf Hitler was to be the pinnacle of a divine mission to bring peace to an unsettled Europe. The awkward Canadian leader had long believed that he had been elevated to the prime minister’s office for a higher purpose. And as a holy feeling seemed to enshroud King as he entered the Third Reich, he determined that this meeting with the Fuhrer was it; the pinnacle of his spiritual journey — “the day for which I was born.”

“I imagine, Mr. King, this is the greatest day of your life,” King’s secretary, Edward Pickering, told his visibly enthralled boss.

In reality, he was striding into one of the darkest hours in Canadian diplomatic history. Hitler would fool many on his path to orchestrating the Second World War, but few more thoroughly than the envoy of Canada.

“As I talked with him, I could not but think of Joan of Arc,” wrote King in his diary that night. The entry overflowed with pages of near-infatuation for Hitler. The German leader was “eminently wise,” a “mystic,” a “deliverer of his people from tyranny.”

King went into obsessive detail about Hitler’s background, his vegetarianism, his love of nature, his alleged religiousness. He remembered every detail from the meeting: How Hitler positioned his hands, what he was wearing, his “knowing smile” and his “smooth” skin.

“He is particularly strong on beauty, loves flowers and will spend more of the money of the State on gardens and flowers than on most other things,” said King.

The meeting had opened rather oddly.

King had strode into Hitler’s office and plunked a biography of himself on the Fuhrer’s desk. The prime minister then cracked it open to show Hitler pictures of his childhood home of Berlin, Ontario.

The city was renamed Kitchener during the First World War, but the symbol-obsessed Canadian was trying to prove his fated links to this meeting.

“I said I thought I understood the German people very well,” he wrote later.

The prime minister had been repeatedly doing this with Nazi officials — although all it seemed to do was inspire polite silence.

King would also try to ingratiate himself to German officials by cheerfully mentioning that he represented the riding of North Waterloo — the apparent significance being that it shared the same name as the Belgian battlefield where a combined Anglo-German force had defeated Napoleon.

As the encounter with Hitler had drawn closer, everything around King had seemed to abound with symbolic resonance.

In his diary, King began underlining words such as “pillow” and “links”, contending that they seemed “significant.”

Every bible passage he read seemed to be speaking directly to him.

“For he shall gives his angels charge over thee, and keep thee in all thy ways,” in particular, echoed in his head as he entered the grounds of the Reich Chancellery.

The night before the encounter, he had made sure to sleep under a Mackenzie tartan blanket, and said he felt that “the whole Mackenzie clan were communicating in my diplomatic mission and telling me what to do.”

The racist extremism of the Nazis was no secret when King arrived in the Third Reich. Public book burnings had been staged as early as 1933 and German Jews were being progressively stripped of their property, employment and rights.

Only two months before King’s arrival in Berlin, in fact, the city’s mayor had effectively banned Jewish children from attending public school.

Meanwhile, Germany was rearming. Troops had already marched into the demilitarized Rhineland, openly violating the terms of the Treaty of Versailles.

In his own meeting with King, top Nazi Hermann Goering had even openly discussed the Anshcluss, the coming annexation of Austria into the Reich — and the first of many Nazi land grabs.

One of Germany’s bestselling book at the time was Hitler’s autobiographical Mein Kampf, a wildly anti-Semitic tome that was quite explicit in stating Germany’s need to turn east and seize “new land and soil.” Hundreds of thousands of Nazi supporters form up for a rally in Nuremberg in 1934, three years before King's visit.

But aside from the rearmament (which Hitler brushed off as a necessary evil that Germany “did not like”), none of this was mentioned in the meeting.

King opened by praising the “constructive work” of Nazi Germany and said he hoped that “nothing would be permitted to destroy that work.”

“It was bound to be followed in other countries to the great advantage of mankind,” King added, according to his diary.

Oddly, for a man enthralled with Nazi Germany, King usually had a reflexive distaste for all things autocratic and militaristic.

When the First World War broke out 23 years before, the young Liberal had watched with disgust as British and Canadian politicians fired up their people with visions of military glory.

“If war comes it will be largely due to the jingo imperialist school who are determined to force it,” he wrote at the time.

And as King had passed through Paris on the way to Berlin, he had been sickened by the grandiose tomb built for Napoleon Bonaparte.

“I felt no desire to visit Napoleon’s tomb but rather strongly to wish that the world might have escaped the Napoleons and the Caesars instead of making Gods of them,” he wrote.

Hitler, incidentally, would have the exact opposite reaction. When the dictator visited Nazi-occupied Paris a mere three years later, he made a point of visiting Napoleon’s remains in order to suss out ideas for his own grandiose mausoleum.

Ultimately, King and Hitler only met for slightly more than an hour. For the Nazi leader, the meeting with the Canadian Prime Minister had been just one appointment among many; a diplomatic nicety shoehorned into a day jammed with briefings and strategy sessions.

But to King, it was a triumph.

The next morning, the prime minister had a “vision” of standing in a beautiful summer field tinged with red roses. At the field’s edge rose the buildings of Parliament Hill, all of which seemed fresher and newer than before.

“The improvement in the buildings was clear — it was a work of reconstruction for which I was responsible,” he wrote. King seen leaving his office on September 3, 1939, soon after receiving news of the United Kingdom's declaration of war against Germany

King had travelled to Berlin just as Canada had begun beefing up its defence budget for fear that they would once again have to fight an increasingly militaristic Germany.

It would be a common Nazi refrain right up until the moment that German troops would begin sweeping through Europe. Everyone from Soviet leader Joseph Stalin to U.K. Prime Minister Neville Chamberlain would at some point accept the word of Hitler that the German dictator had no dreams of conquest.

But King didn’t just believe Hitler; he called the statement a “real note of humility.”

The German leader then looked the Canadian in the eyes and gave a chilling prediction of what another world war would do to Europe.

“Let us assume a war came. What would it mean?” he said.

Regardless of who won, both sides would lose a generation of men — only to then conquer an enemy whose territory had been completely reduced to ashes.

“We would have obliterated civilization of both countries, indeed of greater part of Europe; all that would be left, would be anarchy,” said Hitler.

As King travelled home to Ottawa via France, he was roughly following the same route that nearly 300,000 Canadian soldiers would soon have to take going the other direction. Of those, more than 40,000 would never return.

When war began to break out in Europe only two years after King’s visit, the prime minister had no illusions about what it would mean.

He envisioned France and the U.K. being turned to rubble, and had a particularly strong mental image of St. Paul’s Cathedral collapsing to the ground. (The London landmark survived World War II).

Meanwhile, he had “no doubt” that Canada wouldn’t escape this world war unscathed. He predicted that Canada’s coasts, harbours and even some of its inland cities would be bombed. 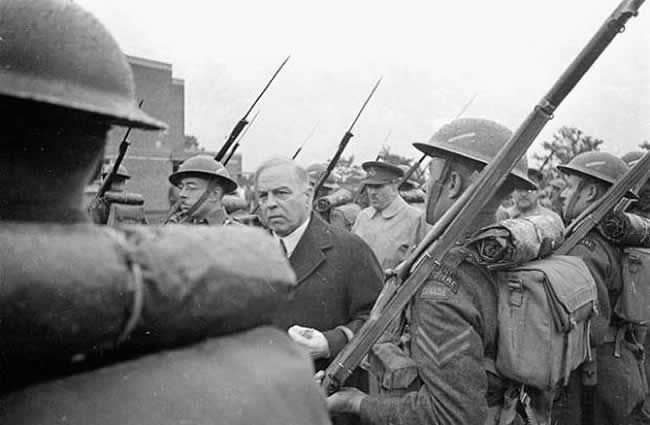 King inspects Canadian troops during a 1941 visit to wartime England. This particular regiment would be the only French-Canadian troops to fight on D-Day

And yet, it would take time for King to understand the Second World War as being the tailor-made creation of the “calm, passive” man he had met in Berlin that summer’s day in 1937.

Even as King ramped up his country for another European war, he wondered whether Poland was to blame for provoking this new war, or whether France and the U.K. had simply been too inflexible with the Third Reich.

“One hardly knows whether to think he was sincere at the time of speaking or not,” wrote King of Hitler on September 6, 1939, the eve of Canada’s declaration of war against Germany.

“He evidently has turned in a completely opposite direction.”