BERLIN — Reinhold Hanning, one of the last surviving SS guards from the Auschwitz death camp, has died, a year after he was sentenced to five years in jail as an accessory to 170,000 murders during the time he worked at the camp. He was 95. 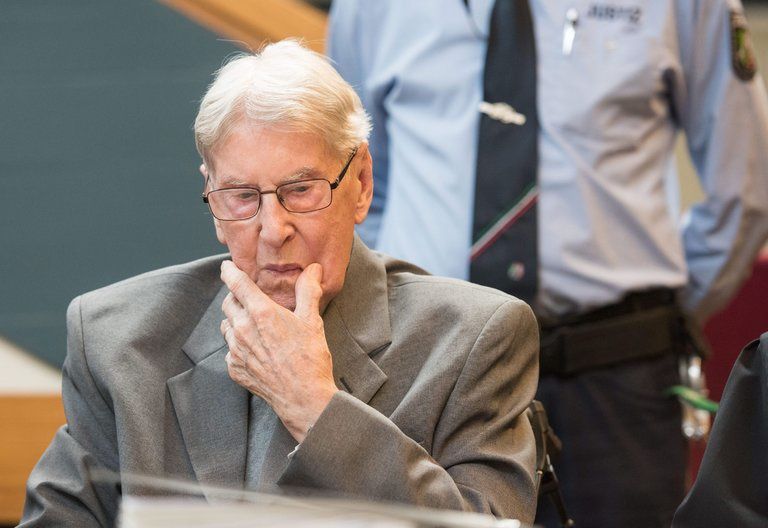 Reinhold Hanning in court in Detmold, Germany, in June 2016, where he was sentenced to five years in jail for being an accessory to the murder of 170,000 people. Credit Bernd Thissen/European Pressphoto Agency

The death was confirmed by Mr. Hanning’s lawyer, Andreas Scharmer, who did not provide other details. Because Mr. Hanning was appealing his conviction at his death, the conviction is not considered legal under the German system. Mr. Hanning never spent time behind bars.

His experience matches that of John Demjanjuk, a former guard at the Sobibor camp in Nazi-occupied Poland. Mr. Demjanjuk lived and worked in the United States for many years before being sentenced to five years in prison by a Munich court in 2011. He died in 2012 before his appeal was heard.

The charging of Mr. Hanning as an accessory was also in line with the case brought against Mr. Demjanjuk, which marked a historic shift in the German approach to prosecuting war criminals. For decades former guards at Auschwitz and other death camps escaped prosecution because the German justice authorities had maintained that they could prosecute only people who were concretely tied by witnesses or other evidence to specific criminal acts.

A contrite Mr. Hanning was convicted last June in a state court in the northwestern German city of Detmold.

“I am ashamed that I saw injustice and never did anything about it,” he told the court in a weak voice from a wheelchair, reading from a statement and speaking into a microphone, “and I apologize for my actions.”

Mr. Hanning joined the Hitler Youth at age 13 and the Waffen SS at 18. He was wounded by grenade splinters on the Eastern front in 1941 and assigned to guard duty in a tower at Auschwitz in early 1942. He remained there until June 1944.

“People were shot, gassed and burned,” he said in court. “I could see how corpses were taken back and forth or moved out. I could smell the burning bodies.”

Survivors testified against him at his trial. One, Angela Orosz, 71, who had been an infant at the camp, faced him and said: “People like you, Mr. Hanning, made the hell of Auschwitz possible! People who looked on and took part, without asking any questions.”

Almost a million Jews and tens of thousands of others were murdered at Auschwitz, also in occupied Poland.

Mr. Hanning told the court that he had never spoken about his time at Auschwitz, not even to his family. “I’ve tried my whole life to forget about this time,” he said. “Auschwitz was a nightmare.”

His death leaves only one surviving former Auschwitz guard whose conviction remains legal. That man, Oskar Gröning, 96, was sentenced in July 2015 to four years in prison for complicity in the murder of 300,000 prisoners.

Mr. Gröning’s most recent appeal was rejected last September by Germany’s highest federal court. The state prosecutor’s office in Hanover is still collecting medical opinions as to whether Mr. Gröning can be incarcerated and receive appropriate care, said a spokeswoman for the office.

Thomas Walther, a German lawyer who was the driving force behind the trial of Mr. Demjanjuk, represented Holocaust survivors as co-plaintiffs in the trials of Mr. Hanning and Mr. Gröning. He expressed frustration that Mr. Hanning never responded to his clients’ pleas to recount his experience at Auschwitz so that present and future generations would know of it.

But in a telephone interview on Thursday, Mr. Walther said that the clients he had contacted on hearing of Mr. Hanning’s death insisted that the most important thing was that Mr. Hanning was brought to justice and that his deeds were recounted in court.

Christoph Heubner, the vice president of the International Auschwitz Committee in Berlin, said by telephone that the conviction, however late, meant “that the biggest aim was achieved.”

“The one judgment stands right to the end, and that means the view asserted itself that anybody who was part of the death machine acquired guilt,” he said.

Mr. Heubner added, “For the survivors, it was never so important whether these accused actually had to serve their sentence, but that judgment was passed.”

The sentences meant that “for Germans, and the world, you cannot forget genocide even if you try for years to repress it.”

“That,” Mr. Heubner added, “is a wonderful thing.”