Richard Anderson, left, and Lee Majors in an episode of “The Six Million Dollar Man.” ABC

Richard Anderson, a character actor known for playing sturdy authority figures in films and on television, most notably the government agent who doled out perilous missions on two popular series, “The Six Million Dollar Man” and “The Bionic Woman,” died on Thursday at his home in Beverly Hills, Calif. He was 91.

Jonathan Taylor, a spokesman for the family, confirmed the death.

With the polished good looks of a telegenic politician and standing an imposing 6 feet 3 inches tall, Mr. Anderson seemed made to order for the authority-figure roles — a police official, a military officer, a senator and more — that casting directors were so often eager to fill.

United Press International once described him as “always a chief, never an Indian.”

His acting career took off with two-dozen films for MGM in the early 1950s. He appeared with Cary Grant in the romantic comedy “Dream Wife” (1953), Leslie Nielsen in the cult science-fiction movie “Forbidden Planet” (1956) and Kirk Douglas in Stanley Kubrick’s antiwar World War I film, “Paths of Glory” (1957).

After the 1950s, Mr. Anderson’s film work was eclipsed by his television career. He appeared in westerns, like “The Virginian” and “The Rifleman”; action shows, like “Mission: Impossible,” “Ironside” and “Knight Rider”; and dramas, like “Dynasty” and “Murder She Wrote.” He played Lt. Steve Drumm, a recurring character, on “Perry Mason.”

“The Six Million Dollar Man” began as a series of television movies on ABC in 1973, based on Martin Caidin’s novel “Cyborg” (1972). The movies, and later the prime-time series that furthered the franchise, told the story of Steve Austin, an astronaut played by Lee Majors, who was grievously maimed after crashing an experimental airplane.

Austin was mended with a cybernetic arm, legs and an eye that granted him superhuman powers, which he put to use on behalf of the United States government.

Austin’s overseer, Oscar Goldman, was introduced in the first TV movie,. played by Darren McGavin. When Mr. McGavin left to play the title character on “Kolchak: The Night Stalker,” Mr. Anderson took over for the second and third movies. The films drew such an enthusiastic audience that “The Six Million Dollar Man” was made into a dramatic series in 1974, with Mr. Anderson continuing in the Goldman role.

“The Vietnam War had just ended, and everybody was down,” Mr. Anderson recalled in an online interview in 2009. “And we came in with a hero.”

Mr. Anderson, whom U.P.I. also described as having “the look of a man who was born in a Brooks Brothers three-piece suit,” proved the perfect actor to play Goldman, a punctilious, impeccably dressed agent for the Office of Scientific Intelligence.

Each episode began with an experimental plane crashing, followed by scenes from an operating room showing robotic limbs and seemingly computerized shots of a man’s outline covered by a grid. Then Mr. Anderson would be heard speaking the introduction.

“Gentlemen, we can rebuild him,” he intoned. “We have the technology. We have the capability to make the world’s first bionic man. Steve Austin will be that man, better than he was before. Better. Stronger. Faster.”

The series was so popular that it led to a spinoff, “The Bionic Woman,” which made its debut on ABC in 1976. Lindsay Wagner starred as Jaime Sommers, a tennis pro who is rebuilt after a sky-diving accident. Mr. Anderson played Goldman on both shows simultaneously, often racing between two shoots in a single day.

Both shows ended in 1978, but the bionic theme endured. The original cast members returned in three television movies, most recently “Bionic Ever After?” (1994), in which Steve and Jaime are wed. Mr. Anderson appeared as Goldman and was also an executive producer of the film. An NBC reboot titled “Bionic Woman” quickly fizzled out in 2007. 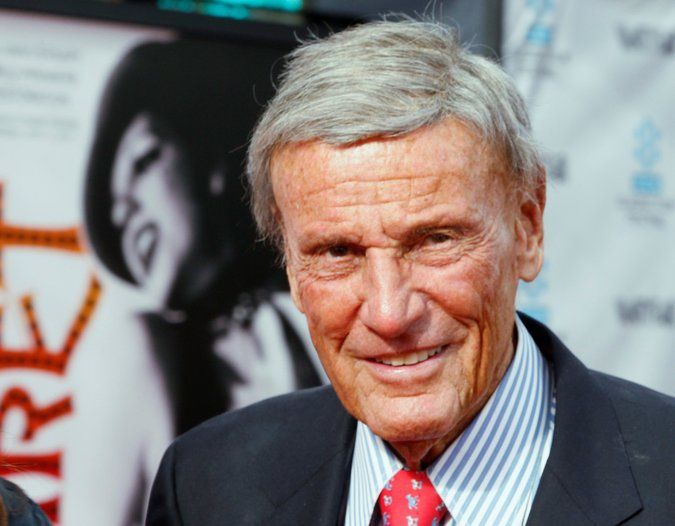 Richard Anderson at a film festival in Hollywood in 2012. Credit Fred Prouser/Reuters

A feature film based on the series has been rumored for more than a decade — the actor Mark Wahlberg and the director Kevin Smith were among those mentioned as interested — but the project has apparently never coalesced.

Mr. Anderson accepted that he was most identified in a supporting role.

“It seems I’ve spent a lifetime telling other characters what the setup is and then sending them out on missions,” he told U.P.I.

Richard Norman Anderson was born in Long Branch, N.J., on Aug. 8, 1926, to Henry and Olga Anderson. The Anderson family had a successful hat-making business and lived on the Upper East Side of Manhattan until they hit hard times in the Great Depression. Richard grew enamored of film, especially westerns, as a way to escape the financial pressures facing his family.

He began acting in high school and served in the Army before appearing on the radio and in summer stock. He landed a bit part in an adaptation of John Steinbeck’s “The Pearl” (1947) and soon secured the MGM contract.

Mr. Anderson was married twice, to Carol Lee Ladd and Katharine Thalberg, the daughter of the actress Norma Shearer and producer Irving Thalberg. Both marriages ended in divorce.

He is survived by three daughters from his marriage to Ms. Thalberg, Deva, Brooke and Ashley Anderson.

One Oscar Goldman cameo did not feature Mr. Anderson at all. In the Judd Apatow film “The 40 Year Old Virgin” (2005), friends of a character played by Steve Carell mock him for owning a Goldman action figure, still in its original packaging, rather than Steve Austin’s.

“That’s worth a lot of money,” Mr. Carell protested. “That’s much more valuable than Steve Austin.”