Known as 'The Beast' and 'The Boss of the Bosses', Riina almost brought Italy to its knees with his indiscriminate killing in the 1980s and 90s One of the most ruthless and bloodthirsty bosses in the history of the Mafia has died aged 87.

Salvatore 'Toto' Riina, sometimes nicknamed 'The Beast' or 'The Boss of the Bosses', led the notorious Corleone arm of the Sicilian mob in the 1980s and 90s.

Together with Luciano Leggio and and Riina's brother-in-law Bernardo Provenzano, the 'Corleonesi' were responsible for thousands of killings.

Women, children, police officers, judge, prosecutors and politicians all died at the hands of Riina or under his orders during his reign of terror.

Riina had been suffering from cancer, heart disease and Parkinson's for some time.

Earlier this year, he asked to be released from prison to 'die with dignity', a request that was ultimately denied. He died on Thursday afternoon in the prisoner's wing of a hospital in Parma.

Earlier in the week, Italy's Health Minister Andrea Orlando had allowed his family to visit him and say their goodbyes.

The father-of-four slipped into a coma and did not recover.

Riina died the day after he turned 87-years-old.

His son Salvo wrote on Facebook: "For me you are not only Toto Riina, you are my father.

"And on this day, for me sad but important, I wish you a good birthday dad.

He never showed an ounce of remorse for his life of crime, and had continued to boast of his murders and made threats to judges until the end. Born in 1930, Toto Riina grew up in poverty on the outskirts of Palermo, the capital of Sicily.

He joined his local Mafia 'family' in Corleone as a boy and committed his first murder when he was just 19.

Riina served six years for manslaughter and returned home an even more hardened criminal than before.

He joined forces with Leggio and Provenzano to gun down the current Coreleone boss in 1969, sparking a mafia war that led to dozens of killings in Sicily.

Riina took control when Leggio was arrested in 1974 and proved to be one of the most murderous and cynical mafiosas in history.

His indiscriminate violence - Riina once ordered a 'hit' on a 13-year-old boy - attracted widespread revulsion and put pressure on other Mafia families. 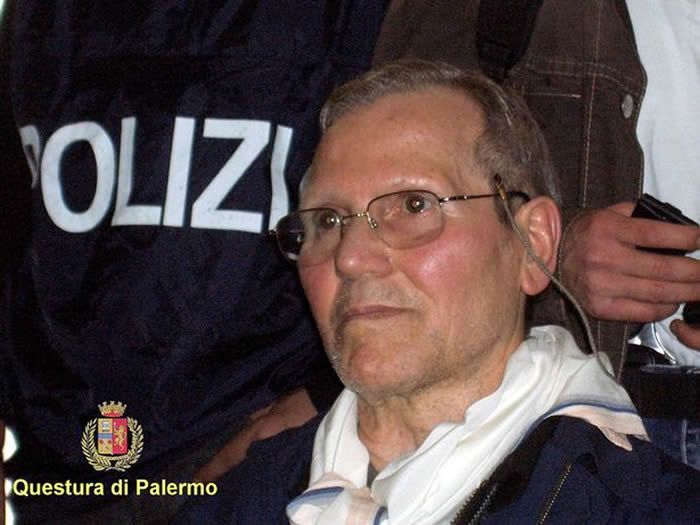 Bernardo Provenzano, nicknamed 'The Tractor' for the way he mowed down victims, in 2006

While many 'Godfathers' projected themselves as pillars of the community, Riina and his thugs were happy to remain in the shadows and on the run.

A former associate turned supergrass once described how an invitation to dinner with Riina was as good as a death sentence.

"He’s a very educated persons, with such a gentle expression." "He was the first person to invent the method, before killing someone, of inviting him for a meal, making him eat and relax and making him enjoy himself.

"After eating, you would strangle him and that would be the end of it… You eat, you have fun and then you kill. That’s the novelty Salvatore Riina introduced."

In the 1980s and 90s, Riina almost brought Italy to its knees with his constant killings.

The US government branded him "the most powerful, dangerous and feared criminal in the world."

Desperate to end the bloodshed, the Italian government sent top Carabinieri Carlos Alberto Dalla Chiesa to crush the mafia in 1982.

Within four months, he had been brutally shot dead in the street alongside his wife.

Outrage at the murders led to new anti-mafia laws being passed and a landmark trial which saw hundreds of mobsters locked up.

Hoping to distract authorities from their Mafia investigations, he ordered an act of terrorism.

On 23 December 1984, a bomb exploded on the 904 express train from Naples to Milan killing 16 and wounding 266 in an atrocity that became known as 'the Christmas massacre'.

Left and right-wing political groups were initially suspected, but the arrest of Giuseppe Calo led to the revelation that the Mafia were behind it.

As the net closed, Riina turned his wrath on the prosecutors bravely taking on the Mafia, Giovanni Falcone and Paolo Borsellino.

The Italian government promised enough was enough, and Riina was arrested a year later aged 62.

"Gentlemen, you are making a big mistake," he was quoted as telling the police officers who put him in handcuffs.

He was tried and convicted on hundreds of counts of murder and ordered to spent the rest of his life in maximum-security prison.

"We have freed ourselves of an enormous weight," said the federal police chief, Vincenzo Parisi at the time.

"Those who were afraid now know that the monster is not invincible."

Provenzano is believed to have taken over as boss.

He was captured in 2006 after nearly 43 years in hiding and died last year in prison from bladder cancer.