Ruth Roman, a screen actress who parlayed her electrically charged combination of sexiness and wholesomeness into Hollywood stardom in the late 1940's and 50's, died on Thursday at her home in Laguna Beach, Calif. She was 75. 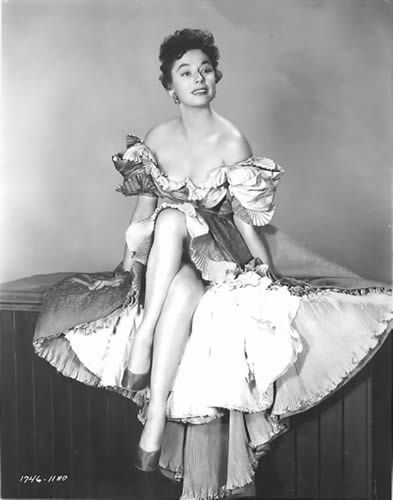 She died in her sleep, said her son, Richard Hall.

After her breakout role opposite Kirk Douglas in Stanley Kramer's ''Champion,'' a 1949 adaptation of a Ring Lardner short story about a maniacal prize fighter, Warner Brothers gave her starring roles in nine films in under two years.

In one day she leaped from working with Bette Davis in ''Beyond the Forest'' to supporting Milton Berle in ''Always Leave Them Laughing.'' A week after the completion of ''Strangers on a Train'' opposite Robert Walker, she was whisked into ''Tomorrow Is Another Day'' with Steve Cochran.

Her romantic partners in films included Randolph Scott in ''Colt .45,'' James Stewart in ''The Far Country'' and Gary Cooper in ''Dallas.''

Few of her films are studied in film schools today. But in their time they made box office cash registers ring like sleigh bells and in 1951 Ms. Roman was receiving 500 letters a week from around the world.

There were plenty of cheesecake queens in Hollywood seeking roles when Ms. Roman arrived in 1945, but it was her come-hitcher warmth, combined with her shapely, dark-haired good looks, that made her a standout. When Collier's profiled her in 1951, the magazine declared that Ms. Roman's career had been built on a ''pervasive air of wholesomeness.''

It was an appeal that even Ms. Roman did not fully understand. When she auditioned for a part in ''Champion,'' she thought she would be right for the role of the fighter's gold-digging floozy and accordingly wore a tight-fitting black dress and heavy makeup when she swivel-hipped into Stanley Kramer's office.

But somehow the wholesomeness showed through. ''Actually, I thought of you for the other girl,'' said Mr. Kramer, then serving as the film's producer.

Marilyn Maxwell played the floozy, with Kirk Douglas as the fighter and Ms. Roman as his demure and steadfast wife.

It had been that same quality that landed Ms. Roman her first film role: a bit part as a WAVE in ''Stage Door Canteen'' in 1942.

Clem Beauchamp, company manager for ''Stage Door Canteen,'' told an interviewer in 1951 that he chose Ms. Roman from dozens of eager actresses because ''I felt right away that here was a girl who would show up on time in the morning with her lines learned and no nonsense.''

By Hollywood standards, Ms. Roman's romantic life was a bit dull. She dated Bill Walsh, a publicity agent, for five years. She once stepped out with Ronald Reagan. And in 1950 she married Mortimer Hall, a Los Angeles television executive. The marriage ended in divorce. A second marriage, to Budd Burton Moss, also ended in divorce. She told interviewers that she disliked nightclubs and flashy clothes. Her one extravagance, she said, was her collection of 35 pairs of shoes, and that consisted mainly of Indian moccasins.

Not all of the excitement in her life was make-believe. In 1956 Ms. Roman was aboard the luxury passenger liner Andrea Doria when it was struck by the Stockholm. Ms. Roman was returning from Italy with her 3-year-old son, Dickie. She was dancing in the ship's Belvedere room, she told a reporter for The New York Times, when ''we heard a big explosion like a firecracker.''

She said she saw smoke coming from the general area of her cabin and rushed there to protect her son. He was sound asleep. She said she awakened Dickie and told him, ''We're going on a picnic.''

When it was clear that the liner was sinking and passengers began entering lifeboats, a seaman lowered Dickie into a boat. Ms. Roman said she followed down a rope ladder, but when she was halfway down the lifeboat pulled away. She called out to the boat but it did not return. She was put on another lifeboat.

Ms. Roman told a reporter she was never in fear for her son's life, but felt sure he would be safe in the lifeboat, which turned out to be true. Ms. Roman and her son were among the 760 survivors of the Andrea Doria.

Her son, her only survivor, lives in California.

Born in Lynn, Mass., on Dec. 23, 1923, she was the youngest of three daughters of immigrants from Lithuania. Her father, Anthony Roman, a carnival barker, died when she was a child, forcing her mother to work as a waitress, cleaning woman and laundress.

Ms. Roman was proud of her family's endurance. ''For a while,'' she once told a reporter, ''we were moving regularly once a month because we couldn't pay our rent.''

But she never felt sorry for herself, she said, remarking, ''When you start out poor, you don't know what you're missing.''

Ms. Roman quit high school in her second year when she decided to become an actress. During the day she worked as a movie usher and at night she performed with the New England Repertory Company, a semi-professional group in Boston.

With $200 in her pocketbook, she soon struck out for Hollywood. For a while, she lived in a boarding house with several other aspiring actresses. They called their home the House of the Seven Garbos.

For six years she endured a series of disappointments. She got a good part in a western called ''White Stallion,'' but it was never released. Then came a role in ''A Night in Casablanca,'' but after the filming her part was cut. But then everything changed after her audition with Stanley Kramer.