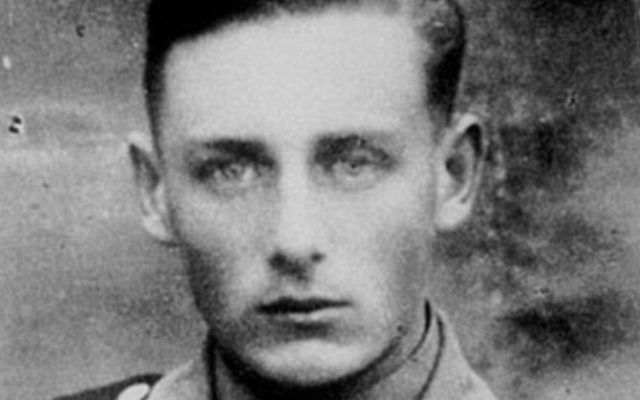 Helmut Oberlander, 93, has said he was forcibly conscripted by the Nazis when he was 17 years old. For the fourth time, he is fighting a federal government decision to strip him of his citizenship. (CIJA)

For the fourth time, the federal government has stripped Helmut Oberlander of his Canadian citizenship.

And for the fourth time, Oberlander will fight it, having won three previous court challenges against the government.

Oberlander, 93, of Waterloo, Ont., was an interpreter for the Nazis and served in Einsatzkommando 10a, which has been described as a group of mobile killing squads that targeted Jewish people in the former Soviet Union. Oberlander is not accused of taking part in any executions.

Oberlander has said he was forced into service and he never subscribed to Nazi ideology.

In July 2016, the Supreme Court ruled it would not hear the government's appeal of a lower court's decision which told the government to reconsider the decision to revoke Oberlander's citizenship.

The decision meant it was up to federal cabinet to decide the retired Waterloo developer's fate in Canada.

"We filed a challenge to that in federal court, which we've done numerous times in the past," Oberlander's lawyer, Ron Poulton, told CBC News.

Oberlander remains in the country during legal proceedings.

Oberlander was born in Halbstadt, Ukraine, in 1924, and was forcibly conscripted by the Nazis when he was 17.

The federal government has argued Oberlander failed to disclose his activities during the Second World War to Canadian officials when he obtained his citizenship in 1960.

In an emailed statement to CBC News, Pierre Deveau, spokesperson for Immigration and Citizenship Canada, said the government "welcomes newcomers" to the country "for all the ways they enrich our society."

"We also know the value of Canadian citizenship, and cannot allow anyone to defraud the system or diminish its integrity. We don't take citizenship revocation lightly, but it is necessary in cases of fraud and serious misrepresentation," the statement said.

"We are determined to deny safe haven in Canada to war criminals and persons believed to have committed or been complicit in war crimes, crimes against humanity, or genocide."

Still, Poulton said to see the case go ahead for a fourth time, "It's extremely unusual. I've never seen it before."

He noted they've successfully fought this same issue three times in federal court of appeal and once in Supreme Court.

For the government to try for a fourth time, "It's extraordinary."

In a statement Tuesday, the Centre for Israel and Jewish Affairs said it was pleased with the government's decision to strip Oberlander of his citizenship again.

"The legal facts in this case are not in dispute: Oberlander was a member of a savage Nazi unit that murdered more than 90,000 Jews in the Holocaust," Shimon Koffler Fogel, CEO of CIJA, said in a statement sent to CBC News.

"There is no statute of limitations for such heinous crimes, and the government deserves credit for its tireless efforts in this case," Fogel said. "This latest development is an important milestone in bringing a measure of justice to his many victims and their families."

A statement from Kirill Kalinin, press secretary of the Embassy of the Russian Federation in Canada, said the move to once again strip Oberlander of his citizenship "is a welcome step, though long overdue."

"We hope it will not end in vain," the statement said.

Kalinin also made reference to Vladimir Katriuk "who found safe haven in Canada."

Katriuk, who was suspected to be a member of a Ukrainian battalion responsible for the deaths of thousands of Jews in Belarus between 1941 and 1944, lived in Ormstown, Que., and was a beekeeper. He died on May 22, 2015.

"More vigorous effort is needed by Canada to bring Nazi criminals to justice for savage atrocities that have no statute of limitations," Kalinin's statement said. "We will closely monitor Oberlander and like cases staying true to the memory of 27 million Soviet people who gave their lives to defeat Nazism, as well as of all victims of this absolute evil."

Poulton said he expects a hearing in the case to take place late this fall or early next year.

RT @Slate: Voting is not only the most practical answer—it has become a way to cope. https://t.co/PuarFDceZg