Until the end of her life, Gudrun Burwitz, the daughter of the notorious SS chief Heinrich Himmler, was always known as ‘Puppi’, the German equivalent of ‘poppet’.

It was an unsuitably endearing nickname for a woman who did more than nearly any other person to keep the flame of the Third Reich burning.

Burwitz, whose death in Munich last month at the age of 88 was only announced yesterday, was an unrepentant proponent of Nazism and a keen promoter of Holocaust denial who refused to accept her father had committed suicide, instead saying that he was murdered by the British. Described by one leading German historian as a ‘dazzling Nazi princess’, she was so committed to the cause that she ran a clandestine organisation called Stille Hilfe — Silent Aid — that acts still as a support network for former Nazis accused of vile crimes.

Among Burwitz’s ‘clients’ was the late Anton Malloth, a supervisor in Theresienstadt concentration camp, who lived freely in Germany and Italy for many years despite being convicted in his absence by a Czech court for the murder of 100 inmates. 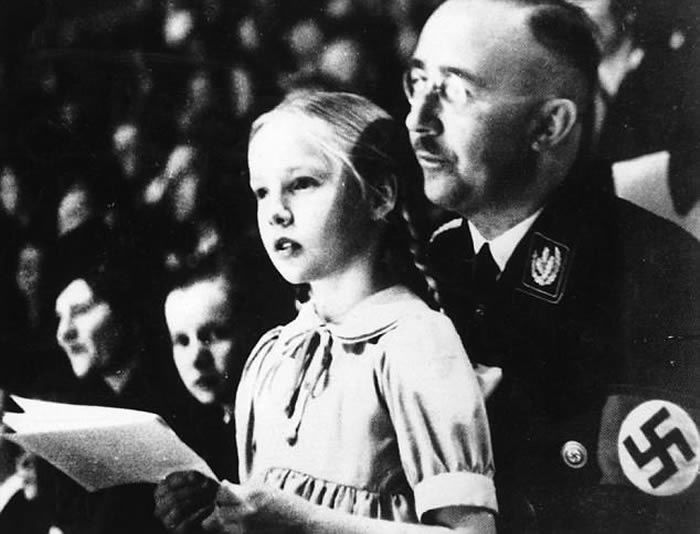 Heinrich Himmler pictured with his daughter Gudrun Burwitz, who died at the age of 88 last month. The German intelligence agency has confirmed it employed her during the 1960s

It was Burwitz who secured Malloth a place in an old people’s home in 1988, and even helped him receive welfare payments. Every week, she would visit him, bringing him chocolate and fruit, and would stroke his hands, telling him he needed ‘building up’.

Then there was Soren Kam, a Danish former SS officer, listed by the Simon Wiesenthal Centre as one of the world’s most wanted Nazi war criminals.

It was Burwitz who secured Malloth a place in an old people’s home in 1988, and even helped him receive welfare payments. Every week, she would visit him, bringing him chocolate and fruit, and would stroke his hands, telling him he needed ‘building up’.

Then there was Soren Kam, a Danish former SS officer, listed by the Simon Wiesenthal Centre as one of the world’s most wanted Nazi war criminals. Heinrich Himmler in Valepp, Bavaria with his wife Marga, back right, his daughter Gudrun, front centre, his adopted son Gerhard, front right, and a friend of Gudrun's, front left, in 1935

As well as providing welfare, the organisation also dished out hundreds of thousands of deutschmarks and euros to help former Nazis fight legal cases.

What made Burwitz all the more disturbing was the evident fondness she had for these murderers and sadists.

‘She has a genuine love for these men and women who served the worst parts of the Nazi regime from 1933 until 1945,’ a German intelligence official commented in 2015. ‘She is a true believer and, like all zealots, that makes her dangerous.’

Burwitz was born into the closest thing the Nazis had to aristocracy. Her father, an early member of the party, was one of the architects of Nazism, and responsible for the implementation of the physical annihilation of the European Jews.

But rather than acknowledge her father as one of the worst mass murderers in history, Burwitz always regarded him as a kindly figure. After all, this was a man who even took a few days leave from his job as head of the SS when Burwitz was born on August 8, 1929.

Himmler and his wife Marga doted on Gudrun, and it was they who nicknamed her ‘Puppi’, largely because she was ‘so sweet and good’.

So proud was Himmler of his daughter that he regularly took her on work trips from Munich to Berlin. On one occasion when she was 12 he even took her to Dachau concentration camp near Munich, an event she recorded in her diary. ‘Today, we went to the SS concentration camp at Dachau,’ she wrote. ‘We saw everything. We saw the gardening. We saw the pear trees. We saw all the pictures painted by the prisoners. Marvellous. Afterwards we had a lot to eat. It was very nice.’

Of course, Burwitz most emphatically did not see ‘everything’ at Dachau. She was undoubtedly presented with a sanitised tour, during which she would not have seen the crematorium where the bodies of over 30,000 people were burnt nor the barbaric medical ‘experiments’ carried out on living prisoners on the direct orders of her father.

By the time she was 14, she was obsessed with her father. She would cut out every picture of him she could find, and stick them in a scrapbook.

She was 15 when she last saw him, in November 1944, the year before he died, although she often spoke to him on the phone. ‘Obviously we didn’t discuss the political situation,’ Burwitz recalled in a very rare interview given in 1959. ‘We usually talked about my problems.’

Towards the end of the war, she and her mother fled to the South Tyrol in northern Italy, where they were arrested by American troops on May 13, 1945.

Unbeknown to them, Himmler had killed himself a fortnight before after being captured by the British. Burwitz found out from a reporter who accidentally told her during an interview in her prison cell.

She always refused to accept he could have killed himself. ‘I don’t believe he swallowed that poison capsule,’ she once claimed. ‘My mother and I never had official notification of his death. To me, the photo of him dead is a retouched photo of when he was alive.’

By 1952, Burwitz was living back in Munich. And yesterday, as well as the news of her death breaking, it also sensationally emerged that she was employed by the West German intelligence service, the BND, in the Sixties.

‘We confirm that Ms Burwitz was a member of the BND for a few years until 1963 under an assumed name,’ said Bodo Hechelhammer, head of the agency’s history department.

It is known she worked as a secretary in the headquarters, but whether the BND knew about her real identity is unclear. Was she spying for the BND, or spying on the BND? Or was she really just a secretary?

What we do know is that by then, Burwitz was already heavily involved in neo-Nazism and helping former Nazis. In 1955, she was invited to Britain by a member of Oswald Mosley’s Union Movement, where she felt right at home. British fascists served her German wine while portraits of Hitler looked down from over fireplaces.

In his book Memoir Of A Fascist Childhood, journalist Trevor Grundy recalls meeting Burwitz, who ‘looked like a schoolteacher, with fair hair, National Health-style glasses, with tweed skirt and brown jacket.

‘She obviously knew she was a very, very important person as far as [fascists] were concerned,’ Grundy adds.

Gudrun — who married Wulf Dieter Burwitz, an official in the National Democratic Party of Germany, a far-Right political organisation — told her British hosts that her father ‘was a great man, a very misunderstood man whose reputation had been destroyed by the Jews’.

It was a repugnant position she would hold for the rest of her ill-spent life. Lionised at secret rallies held by former Nazis, Burwitz spent her days seeking to rehabilitate Nazism.

While the children of some Nazi leaders were able to acknowledge the sins of their fathers, Gudrun Burwitz never could.

Who was evil Nazi and architect of the Holocaust Heinrich Himmler?

The son of a school teacher, Heinrich Himmler was born in Munich on October 7, 1900, and went on to become the architect of the Holocaust and one of the Nazi party's most influential leaders.

His first involvement with the Nazis was in 1923, and he was their propaganda leader between 1926 and 1930. He was made head of the S.S. - the Schutzstaffel - a major organisation and Adolf Hitler's personal bodyguard, which became one of the most powerful organisations under his leadership during the Third Reich. Himmler developed it from a 290-man battalion to a huge group with its own military.

He became president of the Gestapo (Secret State Police) once the Nazis had come to power in 1933, and set up the very first Nazi concentration camp, Dachau, the same year. Himmler was obsessed with the idea of the Germans as the Aryan race and racial purification.

During the Second World War, after Hitler had successfully invaded Poland, he was able to force more than a million Poles and 300,000 Jews out of the west of the country.

In 1941, Himmler was present at the shooting of 100 Jews by firing squad in Minsk. He deciding that having to witness such killings might affect the mental health of his S.S. men, and declared that alternative methods of genocide be found.

In 1942 he was charged with control of 'the final solution to the Jewish problem' - the Holocaust. He was given control of the concentration camps, including Auschwitz, and by spring that year it was greatly expanded to include gas chambers. In total, close to six million Jews were killed by the Nazis during the Holocaust.

When it became clear that the Nazis were going to lose the war, Himmler attempted to bargain with the Allies, and Hitler consequently stripped him of all his duties. After the surrender he used a fake identity to try and escape, but was captured.

He committed suicide while being held by the allied forces on May 23, 1945, by swallowing a cyanide capsule.