MARY Ellis, who died last week aged 101, was a pioneer who flew Spitfires and other aircraft during the Second World War. She was the epitome of the “keep calm and carry on” generation that worked tirelessly to secure victory against tyranny in Europe and the Pacific. 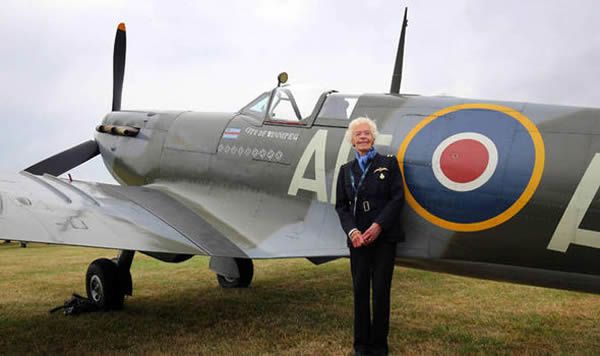 By her own count, she ferried more than 1,000 Spitfires and Wellington and Lancaster bombers from the factories where they were made and RAF bases around Britain. But now a new documentary, which contains the last-ever interviews with Mary, has revealed how she was reunited with one particularly significant Spitfire shortly before her death. The plane wasn’t covered in glory.

In fact, by the time it finally reached its new base in Australia, atomic bombs had been dropped on Japan and its forces had surrendered. The plane was effectively mothballed. But it was the only one to have Mary’s signature – a “romantic gesture” from a popular and vivacious bon vivant hoping to snag a brave and handsome RAF pilot. Interviewed over several months for the documentary Spitfire, Mary described her impetuous act.

“I flew about 1,000 aeroplanes during the war and that Spitfire was the only one I signed. The only one,” she said. “I suppose it was a romantic mood. I was thinking some handsome RAF chap might be fighting, you know, and suddenly see my name and contact me. It never happened.” As chance would have it, it was that particular aircraft that directors David Fairhead and Anthony Palmer came across when filming in 2016. “We had already interviewed Mary because we felt it was important to include the role of women in the Spitfire story,” said David. “After we spoke to her, we were looking for working Spitfires so we could film aerial shots. A collector told us of a Mark VIII in Germany.

We didn’t really want a Mark VIII. It wasn’t one of the variants, like the Mark V or IX, that had seen significant action. But then he mentioned that it was signed. “The penny dropped. I mean, what were the odds? It changed everything. We knew we had to reunite Mary with that aircraft.” Mary had flown the Mark VIII from its factory in Southampton to RAF Brize Norton in Oxfordshire. There, it was packed into crates and shipped to Australia.

“It never saw action and after the war languished in a shed for years,” said David. “It was only the 1969 movie The Battle Of Britain that saw an increased interest in these planes and there were only nine known to be flying that year.” The Mark VIII was found in its shed by collector Rob Lamplough. Eventually, it was bought by Argentinian Anglophile Maxi Gainza, who keeps it in Germany. “Maxi agreed to fly it to the Isle of Wight, where Mary lived,” said David. Mary was reunited with the plane at Sandown Airport. This was significant in itself.

In 1950, Mary became Europe’s first female air commandant when she was elected to manage Sandown, a job she held for 20 years. Those who knew her were not surprised to see her break barriers... Born to a farming family in Leafield, Oxfordshire, in 1917, Mary Wilkins showed an interest in flying as a pre-schooler. Then her father paid a flying circus to take her on a pleasure flight in a de Havilland DH.60 Moth in 1925. “I think that sealed my fate for ever,” she admitted.

As a teenager she paid for flying lessons at Witney airfield and soon gained her licence. Two years after war broke out, Mary heard a recruitment advert for the Air Transport Auxiliary and realised she had the qualifications. The role was incredibly demanding. Mary could deliver four aircraft a day to desperate RAF bases and would be on duty for 13 days before a two-day break. She played a key role in the ATA but the concept of female pilots was not always welcomed... Aeroplane magazine fumed in a 1940 editorial: “Women anxious to serve their country should take on work more befi tting their sex instead of encroaching on a man’s occupation.”

Another editorial wrote: “The menace is the woman who thinks that she ought to be flying in a high-speed bomber when she really has not the intelligence to scrub the floor of a hospital properly.” Mary recalled: “Girls flying aeroplanes was almost a sin at that time.” And, though she was readily accepted by the ATA, others remained incredulous. She recounted the time when staff at one RAF base refused to believe she had piloted the large Wellington bomber that had just landed. “They actually went inside the aeroplane and searched it,” she recalled. JUST A GIRL: Mary in her younger days flying Spitfires

“Everybody was flabbergasted that a little girl like me could fly these big aeroplanes all by oneself.” But it was the Spitfire that stole her heart... Recalling her first flight, she said: “I’m sure my heart was beating hundreds to the dozen.

I got in the aircraft and the chappie said, ‘How many of these have you flown, Miss?’ “And I said, ‘I haven’t flown one at all yet, this is the first one’. And he promptly fell off the aeroplane! I started the aeroplane, taxied out. Fortunately I made the perfect take off. Up in the air I thought: ‘I’m here’ .

“The Spitfire was just like a dancing fairy. It was gorgeous, absolutely wonderful.” It wasn’t always safe, however... “We had no radio at any time, no aids whatsoever. There were also the hazards of the bad weather and the barrage balloons which would pop up. People did get killed.” After the war, Mary flew with the RAF, moved to the Isle of Wight and took up her appointment at Sandown Airport.

She married fellow pilot Don Ellis in 1961 and continued to live in the marital home at Sandown after his death in 2009. In recent years she was a hugely popular figure at aviation shows and memorial events and attended the premiere of the Spitfire documentary just three weeks ago where she received a standing ovation. 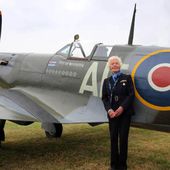 MARY Ellis, who died last week aged 101, was a pioneer who flew Spitfires and other aircraft during the Second World War. She was the epitome of the "keep calm and carry on" generation that worked ...

David said: “When Ant and I had the idea to make the documentary, we knew time was against us. We had to interview as many veterans as we could. Sadly, of the 12 we filmed, only three are still alive.”

He added: “There was a kind of steel to people like Mary. People of her generation were asked to do something and they did it and they did it well without complaining. They got on with it because it needed to be done. “It’s easy to wonder whether we’ll ever see their like again.”