Noel Neill, the petite film and television actress who played Lois Lane in 1940s “Superman” movie serials and on television in the 1950s, died on Sunday at her home in Tucson. She was 95. 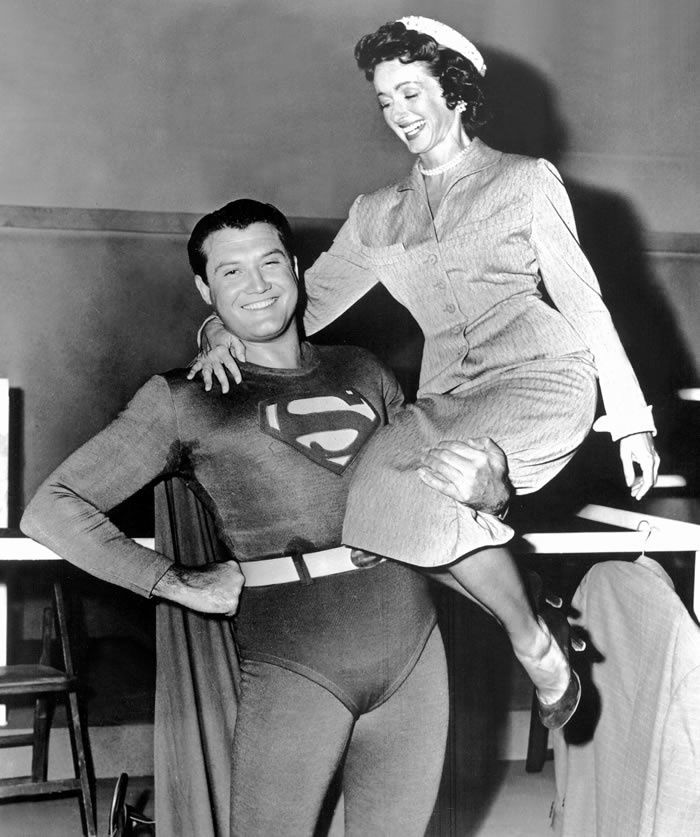 Noel Neill and George Reeves on the set of the television series “Adventures of Superman,” which ran in the 1950s.CreditEverett Collection

Her death was confirmed by her biographer, Larry Ward.

Ms. Neill was 28 and a veteran of 40 or so films when she was first called on to play Lois, the breezy young reporter for The Daily Planet who disdains her mild-mannered colleague Clark Kent but suspects the truth: that he is actually Superman, the dashing defender of truth, justice and the American way.

In 1948, Ms. Neill was cast opposite Kirk Alyn in 15 episodes of the movie serial “Superman,” based on the comic books and radio show. Two years later, she reprised the role in the serial “Atom Man vs. Superman.”

In 1952, when “Adventures of Superman” was created for television, another actress, Phyllis Coates, was cast as Lois, along with George Reeves as Superman. But after one season, Ms. Coates left the show and Ms. Neill stepped into the role, where she remained until the series went off the air in 1958. There were plans to bring the show back, but they came to a halt in 1959 with Reeves’s death, which was eventually ruled a suicide.

Ms. Neill’s Lois normally went to the office and on assignment in proper suits, little hats and pearls, despite the likelihood that she would end the day tied to railroad tracks, trapped in a cave or in some other form of deadly peril, until she was saved by her hero.

The low-budget “Adventures of Superman,” a hit during its original run, became a favorite in reruns and Ms. Neill became a heroine.

The distinction of being the original Lois belongs to Joanne Siegel, who as a teenager in the mid-1930s posed for the cartoonist Joe Shuster when he was first developing the Superman comic with the writer Jerry Siegel. Ms. Siegel died in 2011. But in 2010, when a life-size bronze statue of Lois Lane was unveiled in Metropolis, Ill., a small town that is also the home of a Superman museum (perhaps because it shares the same name as the fictional city where Superman lives and works), it was modeled after Ms. Neill. She attended the statue’s dedication. Noel Neill was born in Minneapolis on Nov. 25, 1920, the daughter of David Neill, a newspaperman who became the news editor of what is now The Minneapolis Star-Tribune, and his wife, LaVere, a former dancer and singer.

Although Noel sang and played the banjo at fairs as a child, she had planned to follow in her father’s footsteps as a journalist. When she was 17, though, a long summer trip with her mother changed her plans. Ending up in Southern California, Ms. Neill auditioned for and won a job singing at the Del Mar racetrack. One of the track’s owners, Bing Crosby, noticed her and introduced her to his brother Larry, a theatrical agent.

After “Adventures of Superman” was canceled, Ms. Neill largely gave up acting. Eventually she went into public relations and worked in the United Artists television department, where one of her assignments was handling Tom Selleck’s fan mail.

By the 1970s, however, she had been rediscovered by young fans of “Superman” reruns, and she began to appear at fan conventions. She was cast in a cameo in “Superman” (1978), Christopher Reeve’s debut in the title role, as the mother of a school-age Lois Lane.

She also appeared in a 1991 episode of the television series “The Adventures of Superboy,” in the superhero film spoof “Surge of Power” (2004) and, as a dying woman, in “Superman Returns” (2006).

Women often told Ms. Neill that they had been inspired to go into journalism by seeing her character work as an equal alongside newspapermen, but Ms. Neill saw her Lois as mild-mannered, a reflection of the prefeminist 1950s.

“It was a man’s world, and you didn’t want to be too cranky,” she told The Knoxville News-Sentinel in a 2002 interview. “When I played her, I could relate to her more if she wasn’t bossy.”