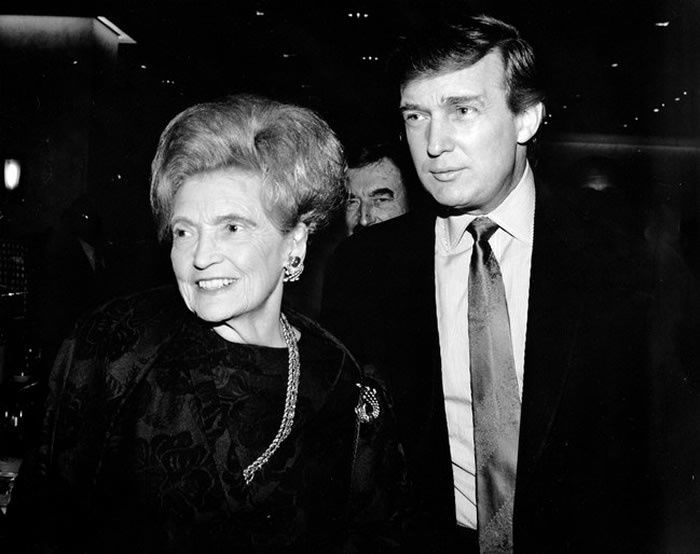 Donald Trump’s mother, Mary, was an immigrant. But Trump doesn’t often bring up his Scottish ancestry on the campaign trail. Photograph by Marina Garnier / NYP Holdings, Inc. via Getty

In November of 1929, a seventeen-year-old Scotswoman, Mary Anne MacLeod, boarded the S.S. Transylvania in Glasgow, bound for New York City. With a high arching brow and deep, round eyes, MacLeod hailed from Tong, a remote fishing community in the parish of Stornoway, in the Outer Hebrides of Scotland. Although the American stock market was in a freefall, Europe, in the shadow of war, was in no better shape. Scots had been emigrating for years, trying to find better opportunities.

In New York, MacLeod would find a well-established community of countrymen and women, including two of her sisters. She took more than one transatlantic trip before settling in New York, in the thirties. On at least two ship manifests and in the 1930 census, her occupation is listed as “maid” or “domestic.”

Mary MacLeod would eventually become Mary Trump, the mother of Donald Trump, the presumptive Republican nominee for President. She died in 2000, long before her son’s political ascent but not before he became a business celebrity. This week, Trump visited his mother’s homeland, attending the official opening of a renovated Trump Turnberry, a golf course he owns in South Ayrshire. As global markets dropped precipitously in response to the Brexit referendum, just the day before, in which British citizens voted to break from the European Union, Trump praised the  sprinkler systems on the course—“the highest level”—and Turnberry’s “incredible suites.” His Turnberry speech was almost entirely about his golf course, but he did talk about his mother, and how she had enjoyed eating dinner at Turnberry when she returned to Scotland to visit. "Her loyalty to Scotland was incredible,” he said. "She respected and loved the Queen.”

Like Barack Obama’s father, Trump’s mother was an immigrant. But Trump doesn’t often bring up his Scottish ancestry on the campaign trail. The “about” section of the Trump campaign’s Web site makes no mention of the Scottish-born matriarch, nor have his opponents reached much for the chance at a dig, given Trump’s campaign-defining comments about immigrants, at least those from Mexico or who are Muslims. Only Ted Cruz brought up Mrs. Trump’s Scottish birth, in a Republican Presidential debate in January.

A request for comment from representatives with the Trump campaign went unanswered.

Mary Anne MacLeod was born on May 10, 1912. Her father, Malcolm, was a fisherman on the remote Isle of Lewis, and he and his wife, Mary Smith, raised a large brood of children. Tong is still dominated by fishing and, increasingly, tourism, and many extended MacLeod relatives live in the area. None of Trump’s cousins wish to speak to the press, William Foulger, the secretary of the Stornoway Historical Society, said, nor does the owner of the family home.

In the thirties, MacLeod reportedly met Frederick Christ Trump at a dance, and the two fell in love, according to a 2005 profile of the Trump family in Real Estate Weekly, although it has been disputed whether she was living in the United States at the time or just visiting. Fred Trump was a builder, having started a construction business while he was still in high school. By the late twenties, he was selling single-family houses in Queens for $3,990 each. Fred Trump and Mary MacLeod married in 1936 and settled in Jamaica, Queens, at the time a haven for Western European immigrants. By 1940, the couple lived with their two children and a Scottish maid, according to census records. The value of their home was twelve thousand and five hundred dollars, or two hundred and fourteen thousand dollars today. Fred made five thousand dollars a year, or about eighty-six thousand in 2016 dollars. As the Second World War raged in Europe, on March 10, 1942, the U.S. District Court in Brooklyn made Mary Trump a naturalized citizen.

Fred Trump’s fortunes would rise with the postwar real-estate boom, as throngs of middle-class dwellings sprouted in Brooklyn and Queens. A review of ship manifests reflects the changing nature of Mary Trump’s travel, from immigrant steamship to cruises and flights with her family to the Bahamas, Puerto Rico, and Cuba, in the fifties. As the wife of a wealthy developer, Mary Trump became a regular on the New York social circuit and worked on a number of philanthropic causes, including organizations for cerebral palsy and intellectually disabled adults.

This was not the life a fisherman’s daughter from the Hebrides might have expected. Among Scots, “she would have been considered a bit of a hick,” said Richard Zumkhawala-Cook, an English professor with a focus on Scotland at Shippensburg University of Pennsylvania. “Americans wouldn’t have cared,” he said, but “most Scots wouldn’t have gone there because it’s so remote from cosmopolitan ideas, attitudes, and access. Scots Gaelic was not always something they wanted to speak proudly.”

In his 1997 book, “The Art of the Comeback,” Trump praised his mother—and indirectly criticized other women in his life. "Part of the problem I've had with women has been in having to compare them to my incredible mother, Mary Trump,” Trump wrote. “My mother is smart as hell." Trump named a room after his mother at Mar-a-Lago.

Both mother and son shared a penchant for dynamic hair sculpting, as for years Mary Trump appeared in photos with a dramatic orange swirl. Slight in frame, she took to New York City’s streets draped in furs and jewelry, a far cry from the teen-age girl who set sail during the Great Depression. “Looking back, I realize now that I got some of my sense of showmanship from my mother,” Trump wrote in his 1987 book, “The Art of the Deal.” He recounted his mother “being enthralled by the pomp and circumstance” of watching Queen Elizabeth’s coronation on television. “She always had a flair for the dramatic and grand. She was a very traditional housewife, but she also had a sense of the world beyond her.”

Mary Trump died in New York City, in 2000, at the age of eighty-eight, just a year after her husband. In the aftermath of his mother’s death, Trump has had a turbulent history with her homeland. Following Trump’s comments regarding Muslims, reports have surfaced that organizers of the 2020 British Open have ruled out staging the event at Trump Turnberry. Trump was stripped of an honorary degree from the Robert Gordon University, in Aberdeen, because of campaign statements that were “wholly incompatible with the ethos and values of the university,” a spokesman for the school said. In December, Trump was deemed, by representatives of the Scottish government, who also cited his comments regarding Muslims, “no longer fit” to be a business ambassador to the nation.

Today, Mary Anne Trump is buried in a cemetery in New Hyde Park, New York, next to her husband, her son Fred C. Trump, Jr., and her mother- and father-in-law. More than a third of the people who live in the neighborhood surrounding the cemetery are foreign-born.

Mary Pilon is the author of “The Monopolists,” a book about the board game Monopoly. She previously worked as a staff reporter at the Times and the Wall Street Journal, where she wrote about sports and business.