This is a tough two-week stretch for Bob Crane Jr.

His 67th birthday was two days ago. Friday marks the 40th anniversary of his father's murder. And July 13 would have been his father's 90th birthday.

He was found murdered in his Scottsdale apartment on June 29, 1978, his skull bashed in with a blunt object and an electrical cord around his neck. His death — and the sordid revelations that followed — stunned Hollywood, his fans and his family.

And though it's been 40 years, and though he now knows things that he wishes he didn't, hardly a day goes by that Bob Crane Jr. doesn't think about his father.

He is not alone.

Bob Crane Sr., has been the subject of a full-length feature film, several books, and numerous documentaries and TV news stories.

His case is popular on true-crime podcasts, and earlier this year a YouTuber posted a shaky hand-held video tour of the Scottsdale condominium complex where Crane died. It has almost 1,000 views.

A leading man (with secrets)

So why are we still so fascinated with Bob Crane?

The one-time Los Angeles radio personality had only one hit television show, and it didn't even get a farewell episode because they didn't do them back then.

After the show, there were only a few guest spots, minor roles in a couple of Disney films, a failed TV pilot. All of which signaled a generally downward career arc that led directly to the dinner theater circuit, which is how the star came to be in Scottsdale in June of 1978.

"You can't forget, that's my problem," Crane told The Arizona Republic in a recent interview. "I can't forget this date — it's still a bad dream."

Crane said there are a number of reasons why the public still craves information about his father.

First, the show is still on TV. Its World War II setting makes it timeless, and it never really ages. And though the show was was canceled in 1971, has been in almost perpetual syndication ever since.

"It started in 1965, and it's still a cash cow," Crane said, adding that he doesn't receive a dime from it because his stepmother inherited his father's estate when he died.

Secondly his father was a good-looking guy who played a hero who always had a wisecrack and always knew the right thing to do. Audiences loved him then and still do today.

"It was the age of the leading man — Robert Conrad on 'Wild Wild West' and Robert Culp on 'I Spy,' " Crane Jr. said. "They were all-American heroes."

And third, and perhaps most compelling, is the nature of the investigation, which revealed salacious details about Crane's sex life, and the fact that the murder is technically still unsolved.

"To root for Col. Hogan and then to find out about a second sordid life shocks and baffles people to this day," Crane said. "Everybody has secrets, but his went public in a big way."

That Jekyll-and-Hyde disconnect between the affable leading man and the darkly sex-obsessed pornographer who not only made his own films, but also performed in them, feeds into what Crane described as the "Yin and yang of celebrity-dom."

"People love to see celebrities on the rise, but after a while you want them to be human again," he said.

He likened it to the recent case of Roseanne Barr, who suddenly shot back to the top of the public consciousness and then just as suddenly crashed after a racist tweet.

"It was over in a second, and people were fascinated with how fast it could implode," he said.

Looking for the dark side

Leo Braudy, a University of Southern California professor who teaches courses in literature, popular culture and film history, agreed that the double-edged sword of celebrity helps explain why people are still captivated by Crane's story.

"We love them on the way up, then love to hate their success," said Braudy, whose book, "The Frenzy of Renown," explores the nature of fame and the public's fascination with it.

"The whole enterprise of gossip is an effort to get behind the façade," Braudy said. "Crane becomes a prime example. … Is the person we see on screen really who we think they are, or do they have a dark side?"

He drew a comparison to stars from earlier Hollywood eras whose allure endured after they were linked to sexual scandal: Charlie Chaplin, who had a proclivity for underage girls, and Ingrid Bergman, whose affair with Italian director Roberto Rossellini was denounced on the floor of the U.S. Senate.

Braudy said another factor in the ongoing fascination with Crane is the fact that the murder is still unsolved.

"It's sort of mysterious," he said. "It's not quite clear what happened. It's a puzzle, and people want to work it out like they do with the Kennedy assassination."

Crane had been starring in a production of a play called "Beginner's Luck" at the Windmill Dinner Theater in Scottsdale when he was killed. He was found bludgeoned to death with a cord around his neck by a co-star who had gone to Crane's apartment to work with him on some lines from the play.

The only suspect in the case, longtime friend John Carpenter, remained free for years before Scottsdale police were able to charge him. He finally came to trial in 1994, 16 years after the murder, but he was acquitted because of questions about the forensic evidence in the case. John Hook examines evidence in the Bob Crane murder. Special for The Republic

Just last year, Phoenix television anchor John Hook published a book about the Crane case and was able to get access to some of the blood samples that were used as evidence and have them retested.

"It consistently ranks as one of the great unsolved celebrity murders of all time," Hook said, noting that gets requests for interviews and speaking engagements about the case "all the time."

In his book, "Who Killed Bob Crane?" Hook set out to "end the speculation" about Crane's death by using forensic science the way famed attorney Vincent Bugliosi attempted to in his 2007 book about the Kennedy assassination.

Hook focused on DNA technology, which wasn't available at the time of the murder and was only rudimentary in its use during Carpenter's trial.

"If we can retest stuff, maybe we can prove that the blood that was found in Carpenter's car was Bob Crane's," said Hook, an anchor for KSAZ-TV (Channel 10).

He noted that jury believed Carpenter was the murderer, but they didn't believe the evidence.

Almost from the time Crane's body was discovered in his bedroom of the Winfield Place apartments (now condominiums) in Scottsdale, authorities made critical mistakes that later undermined their case.

For starters, Scottsdale police failed to adequately secure the crime scene. They allowed his co-star, Victoria Berry, into the apartment to answer the phone several times, potentially contaminating the crime scene. In addition, the Maricopa County Medical Examiner climbed over Crane's body and shaved his head to examine the fatal wound, Hook said.

And while evidence photos show a piece of what appears to be human tissue on the door of Carpenter's rental car, the crime lab at the state Department of Public Safety either lost that critical piece of evidence or never bothered to recover it in the first place. Newsman John Hook says he became "kind of obsessed" with the Bob Crane case. Special for The Republic

Crane and Carpenter had been friends for years. Carpenter, who died in 1998, was a sales manager for Sony and then Akai. He shared a mutual interest in the latest electronic gear with Crane.

They also shared a mutual interest in women and pornography. In Crane's apartment, police found video tapes Crane had made of himself and numerous women, along with photographic negatives of nude women.

During the investigation, Carpenter told police that right before the murder, Crane showed him a book of Polaroid snapshots of naked women, including some he'd met at the dinner theater. Police were unable to find it in Crane's apartment. It was one of the only things missing — the other was a camera tripod — from the apartment, which showed no sign of forced entry.

Both Hook and Crane's son said that Crane may have been growing tired of Carpenter, who police identified as a suspect almost from the start. Two days after Crane's body was discovered, police found blood on the door panel of the car Carpenter had rented.

While the blood was Crane's type — B — it couldn't be conclusively linked to Crane, and the Maricopa County Attorney's office refused to allow Scottsdale police to arrest Carpenter. Authorities remove the body of actor Bob Crane from a Scottsdale apartment where he was discovered beaten to death June 29, 1978. The Republic

An arrest, an acquittal

Almost 14 years to the day after the murder, authorities finally arrested Carpenter, citing a new analysis of the crime scene and blood and tissue evidence.

The new theory held that the missing tripod was the blunt instrument used as the murder weapon, and that the blood in Carpenter's rental car had dripped from it when he leaned it against the car door. A key piece of evidence was a photograph of tissue, thought to be from Crane's skull, but the actual sample was never produced. The case finally came to trial in 1994. After eight weeks of testimony, the jury deliberated for nearly three days before acquitting Carpenter.

"What was the speck?" jury foreman Michael Lake asked after the trial. "Nobody knows what it was, not even the doctors. ... You can't prove someone guilty on speculation."

The results indicated two separate profiles, neither of which matched Crane.

Hook said the "crazy result" does cast doubt on whether police had the right guy and likened it to the JonBenét Ramsey case in Colorado, saying the lack of certainty only deepens people's fascination with the case.

"If we'd gotten a different result, that would have been expected," he said. The unexpected result "makes it more of an alluring story." 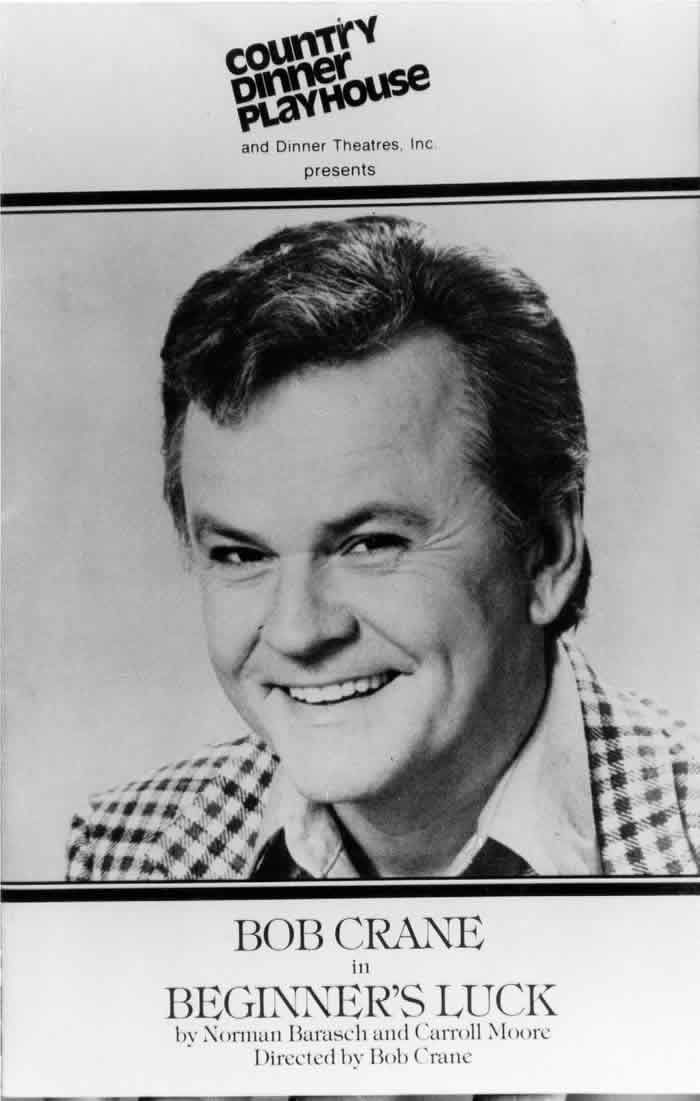 Advertisement featuring actor Bob Crane in "Beginner's Luck." He was beaten to death in a Scottsdale apartment. Special for The Republic

In his own 2015 book, "Crane: Sex, Celebrity and my Father's Unsolved Murder," Bob Crane Jr. talks about coming to terms with both his father's death as well as his secret life.

For now, he'd just like to be able to have a conversation with his dad. The last time he talked with him was when his father called him to wish him a happy birthday two days before he died.

"I think about all the things he missed. He loved technology, and he missed out on CDs, cellphones, digital.

"He would have loved it all, but it wasn't to be. The big question is why? It didn't have to be that way."