THE HORRIFIC human experiments performed on British, American and Russian POWs and Chinese civilians by Japan during World War 2 are the subject of a harrowing new book. In total, more than 3,000 people were infected by bubonic plague, dissected alive, given frost-bite – all under the guise of “wartime research”.

The book, titled Unit 731: Laboratory of the Devil, Auschwitz of the East, describes atrocities were carried out in a secretive facility constructed in 1936 in what is now Harbin in northeastern China.

It enabled the Japanese Imperial Army to conduct germ warfare experiments, as well as those investigating weapons capabilities and the limits of the human body.

At the time Unit 731 was described as a lumber mill, then a water purification plant, which understanding of what actually went on there low even today, both inside and outside Japan. 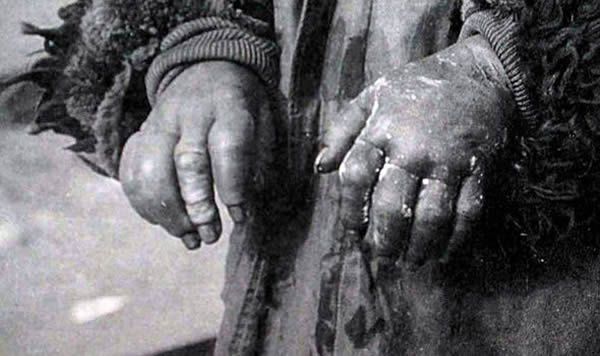 Scientists would deliberately give patients frostbite to study the results

Today, the site is a museum, with one building still containing rows of cages which housed rats used to produce bubonic plague.

The book also contains stomach-churning pictures of Japanese soldiers undertaking a vivisection, an operation on a living person to study living tissue and organs.

Experiments on men, women and children were carried out without anaesthetic because results would not be influenced by drugs. The man responsible for Unit 731, Shiro Ishii, was granted immunity from prosecution after the war

Prisoners infected with diseases would have organs removed while alive to allow scientists to study their condition before decomposition began.

Prisoners would have limbs amputated to study blood loss, with doctors often re-attaching them on opposite sides of the body.

In addition, prisoners would be exposed to sub-zero temperatures in order to develop frostbite, with doctors studying how long it took for gangrene to set in, and how long before patients died.

Another experiment conducted on young Chinese civilians involved them having their arms frozen stiff with ice, before being placed into vats of hot water, with the flesh then stripped off the bones while they were still alive. A disused building at Unit 731 in China

Scientists also forced prisoners with syphilis to have sex with healthy prisoners to study how the disease spread.

Female prisoners were repeatedly raped to force pregnancies, and then infected with syphilis or another disease in order to study how it affected the unborn foetus.

Apart from the 3,000 who died at Unit 731, the Japanese went on to kill many more using what they learned there, mostly Chinese civilians,with typhoid fever, cholera and other diseases and released into the water systems in Chinese villages.

The Japanese government denied the existence of the unit until 1998.

The man responsible for the unit, Shirō Ishii, escaped punishment after the war after he and others involved were granted immunity by the United States in exchange for disclosing the results of their experiments.

Eleven other scientists were put on trial by the Soviet Union after the war, receiving between two and 25 years in a Siberian labour camp.

Last month, Japanese scholars announced plans to publish a list of 3,607 members of staff who worked at Unit 731, including 52 surgeons, 49 engineers, 38 nurses and 1,117 combat medics.