A pioneer in hostile takeovers, he made a name for himself with a string of unsolicited bids for larger oil companies 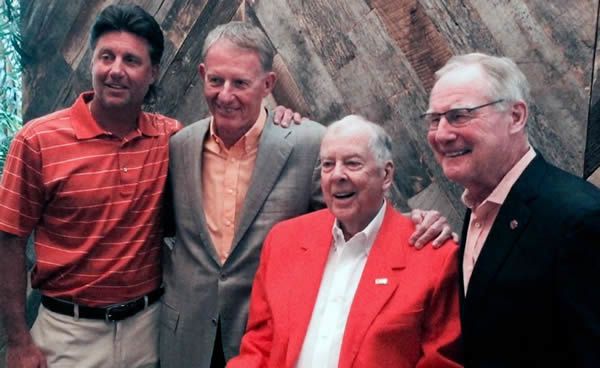 T. Boone Pickens Jr., an oil prospector and pioneer in hostile takeovers whose folksy wit made him one of America’s most recognizable business leaders, has died at age 91.

Mr. Pickens rose to fame as founder and chief executive of Mesa Petroleum Corp. , where he was an advocate for shareholder rights who liked to vilify the excesses of “Big Oil”. He later morphed into a high-stakes energy trader before becoming a philanthropist and early investor in renewable power.

His incisive business opinions and colorful turns of phrase made him a popular figure for decades. “I’d rather be lucky than good,” Mr. Pickens often remarked.

But his defining characteristic was a seemingly bottomless well of confidence—in his ventures, as well as in U.S. energy, whether it was oil, natural gas or, later in life, wind.

He died Wednesday of natural causes, surrounded by friends and family, according to spokesman Jay Rosser. He had endured a series of strokes in recent years and sustained head injuries in a 2017 fall.

In an annual letter last month to football fans of Oklahoma State University, where he was a major benefactor, Mr. Pickens reflected on his mortality. “I’m realistic about being close to the finish line,” he said. “And I’m working diligently to complete projects as quickly as I can and tie up any loose ends.”

Born in Holdenville, Okla., as Thomas Pickens Jr., he was a trained geologist who went to work for Phillips Petroleum after graduating from college. Two years later, he struck out on his own, forming what was later renamed Mesa.

He was little known outside of energy circles until 1968, when he made the first of a string of unsolicited bids for much-larger oil companies. He later claimed the idea for a hostile takeover came to him in the shower, after a friendly overture was turned down. “It has become cheaper to look for oil on the floor of the New York Stock Exchange than in the ground,” he said at the time.

In 1983, Mesa, which at the time was based in Amarillo, Texas, made a bid for Gulf Corp., one of the largest corporations in America and a titan in the oil world. While unsuccessful, the bid forced Gulf to accept a merger with Chevron Corp. A Pickens-led investment group earned $760 million when the shares it bought in Mesa appreciated during the takeover. 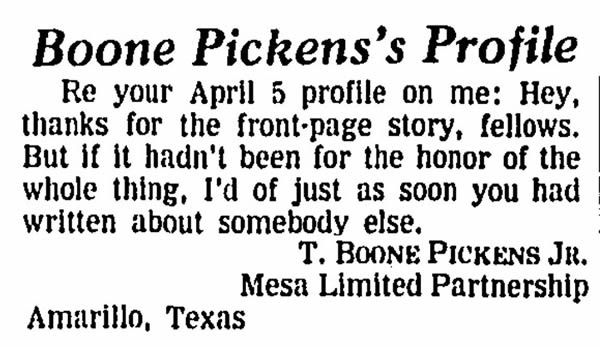 Though his targets regarded him as a financial pirate fueled by junk bonds, Mr. Pickens contended that executives leading companies in his crosshairs were poor managers and not looking out for the interests of their shareholders.

“Chief executives, who themselves own few shares of their companies, have no more feeling for the average stockholder than they do for baboons in Africa,” Time magazine quoted him as saying in a 1985 cover profile.

‘It has become cheaper to look for oil on the floor of the New York Stock Exchange than in the ground.’ —T. Boone Pickens

Mesa Petroleum hit hard times when the price of natural gas collapsed. Fort Worth, Texas, billionaire Richard Rainwater and his wife, Darla Moore, who managed their investments, bought shares in Mesa. Eventually, Ms. Moore pushed Mr. Pickens out of the company he had run for 40 years in 1996—an ironic twist for the onetime corporate raider.

The year Mr. Pickens left Mesa, he launched BP Capital Energy Fund. While much of Wall Street was headed toward technical trading and using complex algorithms, Mr. Pickens focused on fundamental analysis of supply and demand for oil and natural gas.He later branched out from fossil fuels, making high-profile, although unsuccessful, investments in water and wind.

His order of 667 wind turbines from General Electric in 2008 was the largest single order ever at the time and was destined for a planned wind farm in the Texas panhandle. He pulled the plug on the $2 billion project a year later because of difficulty moving electricity from such a remote region to city centers and because falling natural gas prices made competing electric power sources inexpensive.

“Over a lifetime in business I’ve had to make a lot of tough calls—right and wrong, and many of them very public. Good calls have made me a lot of money, and I’ve lost my ass on the bad ones,” Mr. Pickens later wrote online. “Fortunately, I’ve been right more often than I’ve been wrong.”

When Mr. Pickens’ book, “The First Billion Is the Hardest,” made its debut, he told The Wall Street Journal: “I can still reach a young audience who want to know that average intelligence and a good work ethic is all you need.”

His fans were legion. Young and old, liberal and conservative, many Americans embraced his Pickens Plan to break OPEC, wean the U.S. from foreign crude and drill for more cleaner burning natural gas across the U.S. to replace dirty coal in power plants.

Former Texas governor and current U.S. Energy Secretary Rick Perry praised Mr. Pickens on Wednesday as “a Texas-sized legend who left a permanent impact on the world of American energy as we know it. He was a bold visionary who long championed a diverse energy mix from renewable power to oil and gas, and understood that American energy security is critical to our national security.”

Mr. Pickens, a graduate of Oklahoma State, donated $165 million to transform athletics at his alma mater, one of the largest gifts ever to a college sports program. His largess helped improve the fortunes of the Oklahoma State Cowboys football team, which upgraded its redbrick football stadium, now known as Boone Pickens Stadium, with luxury suites that raised its standing in the Big 12 Conference.

But the school athletics fund encountered financial difficulties after Mr. Pickens recommended it try to boost its returns by taking out insurance policies on the lives of Oklahoma State alumni, which backfired when the death payouts didn’t cover the premiums. The plan was ultimately abandoned.

Some of his later energy bets were also not as prescient as his earlier ones. His ever-bullish outlook for oil trades led to losses of $2 billion during 2008’s financial crisis, for example.

As fracking triggered a revolution in U.S. oil production, Mr. Pickens was initially skeptical that the techniques could produce enough to have an effect on global prices, a stance that proved folly.

Mr. Pickens spent his later years running his financial firm, BP Capital, from his office in a low-rise Dallas office complex. There, he hunkered down in a conference room with a small dog at his feet and his beloved bite-size Butterfinger candy bars always within reach in a glass bowl marked “Boone’s Butterfingers.”

His trading positions were projected onto one wall and on another hung maps of his huge range in the Texas Panhandle, showing the wells he had drilled there and those that were planned.

His Mesa Vista ranch was a source of immense pride for Mr. Pickens, who hosted heads of state, oil executives and other A-listers there. It sprawled over more than 100 square miles, had its own airport, art gallery, a chapel in which he once married and an 11,000 square-foot kennel for his pack of hunting dogs, which numbered more than three dozen. To be invited to Mesa Vista for a bird hunt was a rite of passage for aspiring energy tycoons. Mr. Pickens had an unflappable memory when it came to hunt companions who couldn’t shoot straight.

Mr. Pickens closed his energy-focused hedge fund early last year amid declining health and waning interest in energy markets. “If you are lucky enough to make it to 89 years of age like I have, those things tend to put life in perspective,” he said at the time. “Trading oil is not as intriguing to me as it once was.”

Shortly thereafter, some of Mr. Pickens’ lieutenants started the Pickens Oil Response Exchange Traded Fund, which was tailored to mimic his investing philosophies and wager on U.S. energy abundance. This summer, the ETF, just as the oilman once did, changed its focus from fossil fuels to renewable energy. Its ticker symbol changed too, to RENW.

Mr. Pickens is survived by his five children—Deborah Pickens Stovall, Pam Pickens Grace, Michael Pickens, Tom Pickens and Liz Pickens Cordia—as well as 11 grandchildren and “an increasing number of great-grandchildren,” according to his family.

Memorial services are planned in Dallas, where he lived, and Stillwater, Okla., home of Oklahoma State, where he is set to be buried on campus.

— Gregory Zuckerman contributed to this article.

Write to Russell Gold at russell.gold@wsj.com and Ryan Dezember at ryan.dezember@wsj.com

Richard Rainwater lived in Fort Worth, Texas. An earlier version of this article incorrectly referred to Mr. Rainwater as a Dallas billionaire. (Sept. 12)