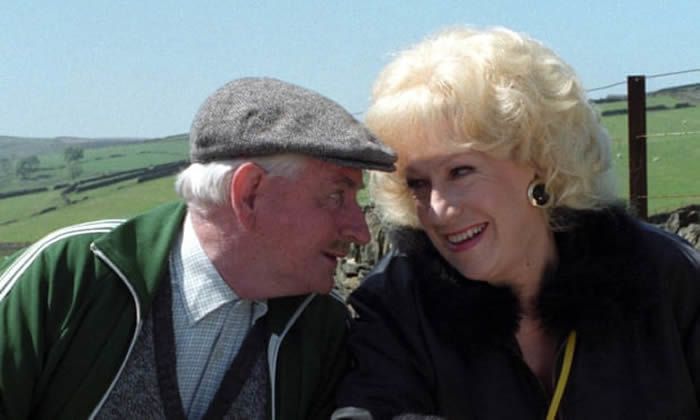 Jean Fergusson as Marina and Robert Fyfe as Howard Sibshaw in Last of the Summer Wine. ‘They were looking for a blowsy blonde,’ said Fergusson. Photograph: BBC/PA

The actor Jean Fergusson, who has died aged 74, etched herself into the annals of television sitcom with her 25-year run in Last of the Summer Wine as Marina, most often seen on tandem rides with Howard Sibshaw, escaping from his domineering wife, Pearl.

In 1985, as the gentle comedy was expanding its cast and storylines beyond the original premise of three childlike old men and their misadventures in a small Yorkshire town, Fergusson was brought in as the peroxide blonde supermarket checkout assistant Marina after appearing in two stage versions in summer seasons in Eastbourne (1983) and Bournemouth (1984).

“They were looking for a blowsy blonde,” she said. “I did a reading and the director said, ‘You’re in – you start today.’”

For the Bournemouth run of the Roy Clarke creation, Robert Fyfe and Juliette Kaplan replaced the original actors playing Howard and Pearl (then named Ivy). Fergusson, Fyfe and Kaplan were introduced to the TV version in 1985 and soon became regulars, staying until the final episode 25 years later.

Howard was infatuated with Marina and she encouraged him to get away from Pearl, but their antics never went beyond a kiss. Bike rides with views of dry-stone walls and the Yorkshire landscape behind them became the standard scenario – and the mini-skirt-wearing Fergusson had to endure the elements. “My character doesn’t get to wear an overcoat,” she said. “There’s no room for thermals! I never knew what teeth-chattering meant until I came to do this series.”

Jean was born in Wakefield, Yorkshire, to Scottish parents, Margaret (nee Jackson), and Francis Fergusson, a civil engineer. The family moved around between Yorkshire and Dumfriesshire until Jean was 12, when they settled in Bridgend, Glamorgan.

While studying for A-levels at Bridgend girls’ grammar school, she joined an amateur dramatics company, the Bridgend Castle Players, then trained as an actor at Cardiff Castle College of Music and Drama (now the Royal Welsh College of Music & Drama), graduating in 1965.

After touring schools with Brian Way’s Theatre Centre company, she spent two years in rep at Oldham Coliseum, followed by engagements in theatres all over the country.

Fergusson made her television debut with a short stint in Crossroads during 1974, playing Caroline Herbert, who was dumped by Roy Mollison in favour of Sheila Harvey, and appeared as a colonel’s wife in an episode of All Creatures Great and Small four years later.

During her time in Last of the Summer Wine, Fergusson took two roles in Coronation Street. In 1987, she played Helen Ashcroft, sister-in-law of Dr Lowther, at the time his cleaner, Hilda Ogden, left the street to move into a flat attached to his Derbyshire retirement cottage. In 1999, Fergusson played Gary Mallett’s mother in one episode.

She had a third, longer run in the soap as Dorothy Hoyle (2010-11), who became embroiled in a plot by her unstable daughter Charlotte and John Stape – who had previously been jailed for kidnapping Rosie Webster – to get Stape back into teaching by stealing someone else’s identity. Dorothy, along with her husband Alan and Chesney Brown, was tied up by Stape in the cellar of her house.

Fergusson was seen in one-off parts in programmes such as Albion Market (1985) and Peak Practice (2001), and the mini-series A Woman of Substance (1985). She also had three roles in Doctors between 2006 and 2013, and played a comical ballroom dancing instructor with commands such as “bottoms tucked right under” in Dennis Potter’s 1993 musical serial Lipstick on Your Collar and a neighbour breaking to Combo (Stephen Graham) the news of his mother’s death in This Is England ’86 (2010).

Last of the Summer Wine brought her regular appearances in pantomimes to add to a full CV of regional theatre parts. In the West End, she played Ms Cowper in Cash on Delivery (Whitehall theatre, 1996), a farce by Michael Cooney, son of Ray Cooney, godfather of the genre, who directed the production. One glowing review described her character as “a grotesquely abused old trout”.

After someone remarked to her that she shared some of Hylda Baker’s mannerisms, Fergusson recalled doing impressions of the Lancashire comedy actor and queen of innuendo-ridden malapropisms in the playground at school. This inspired her to write her own one-woman show, She Knows You Know!, a poignant and often tragic story about a performer disliked by many with whom she worked, the title taken from one of Baker’s catchphrases.

She spent three years researching it and, after performing the play at regional theatres (1993-97), had an eight-week run in the West End, at the Adelphi theatre (1997). The production was nominated for a Laurence Olivier theatre award.

In 1997, Fergusson adapted the show for BBC Radio 4’s Saturday Playhouse slot and had her biography of Baker published under the same title.

Paul Jenkinson, her partner of 30 years, died in 2011. She is survived by her sister Marjorie and nephews Daniel and William.