Retired Navy Adm. Stansfield Turner, the iconoclastic director of the Central Intelligence Agency in the late 1970s who significantly reorganized its clandestine ranks and helped usher in a new technological age at the agency, died Jan. 18 at his home in Seattle. He was 94.

His secretary, Pat Moynihan, confirmed the death but did not disclose the cause.

An Oxford-educated Rhodes scholar, Adm. Turner was long considered to be one of the Navy's sharpest analytical minds and brashly confident leaders. He was a four-star admiral and commander of NATO forces in Southern Europe when he was tapped in 1977 by President Jimmy Carter, a Naval Academy classmate, to lead the U.S. intelligence community.

As director of central intelligence during the entire Carter administration, Adm. Turner had an office in the Old Executive Office Building — next to the White House — and he met the president frequently for one-on-one briefings. 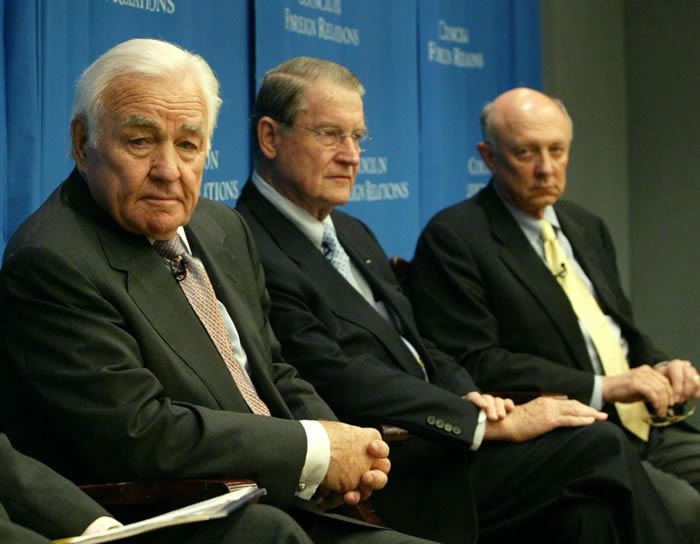 He became the most powerful director of central intelligence in history when Carter signed an executive order in 1978 that gave Adm. Turner authority over the budget of most of the U.S. spy agencies.

"He felt that staying on the cutting edge of technology was important because of the vast amount of intelligence these devices could gather," William Webster, who served as director of central intelligence from 1987 to 1991, said in an interview.

While leading the CIA, Adm. Turner dissolved several long-term clandestine operations that he deemed too risky and declined to approve many new ones. Instead, he promoted the use of technology for intelligence gathering as a safer alternative to putting spies on the ground.

Adm. Turner also aimed to make the agency more accountable. When he became director, the CIA was reeling from criticism in the wake of congressional hearings into unsavory clandestine operations. In testimony, investigators said the CIA had tested experimental drugs on human subjects, plotted to assassinate foreign dignitaries and illegally spied on American citizens.

Adm. Turner immediately sought to polish the agency's image. His transition to the top job did not go smoothly.

The admiral's military bearing and reformist approach clashed with the agency's ranking establishment of clandestine officers.

To his new colleagues, Adm. Turner was an outsider who struggled to earn respect because he had "no experience in running a clandestine intelligence organization," said Thomas Powers, a CIA historian and Pulitzer Prize-winning journalist.

Months after he took office, Adm. Turner decided to jump-start a long-standing CIA plan to pare down the staff to reflect changing intelligence priorities after the Vietnam War.

On Oct. 31, 1977, he announced a reorganization to the CIA's clandestine operations staff, launching what media accounts called the "Halloween massacre."

In all, 820 positions were eliminated: 649 jobs were dissolved by attrition, 154 officers were asked to retire involuntarily and 17 were fired.

Some of the officers who left had been with the CIA since its inception in 1947. Critics said Adm. Turner's reorganization amounted to a brain drain of the agency's most experienced covert officers.

"Many of the old cadre never forgave Turner for this reduction in force that he carried out," said John Prados, an intelligence expert and senior fellow at the National Security Archive in Washington. It did not matter, Prados said, that Adm. Turner "was only carrying out preordained orders."

Throughout the turmoil, Adm. Turner had Carter's steadfast support. "We were aware that some of the unqualified and incompetent personnel whom he discharged were deeply resentful," Carter told the New York Times in 1997. "But I fully approved."

Stansfield Turner was born in Highland Park, Ill., on Dec. 1, 1923. His father was an Englishman who immigrated to the United States and became a real estate mogul.

At the U.S. Naval Academy in Annapolis, he was a lineman on the football team and an academic standout. In 1946, he graduated 25th in a class of 820 that included a future chairman of the Joint Chiefs of Staff, 32 future admirals, two future generals and a future president. Carter later said that Adm. Turner "was so far ahead of us that we never considered him competition or even a peer."

Selected for a Rhodes scholarship, Adm. Turner received a master's degree in philosophy, politics and economics from the University of Oxford in 1950.

During a 32-year military career, he served on destroyers during the Korean War and commanded a guided-missile ship during the Vietnam War.

In 1972, he was named president of the Naval War College in Newport, R.I., where he used his Rhodes connections to revamp the academic standards.

He instituted exams for the first time in the college's history and required students to read 1,000 pages a week. He helped create the first permanent faculty and brought in leading professors from Oxford, Harvard, Yale and Princeton.

Adm. Turner was commander of the Navy's Second Fleet, based in Norfolk, before receiving his fourth star and assignment as NATO commander in Southern Europe in 1975.

At the time, he openly harbored an ambition to become chief of naval operations, the Navy's top uniformed officer and its representative among the joint chiefs. Then Carter called on him to lead the CIA.

Adm. Turner initially accepted the position on two conditions. One was that he would keep his naval commission to be considered for Carter's nomination to chief of naval operations. Carter declined to nominate him when the position became vacant, and Adm. Turner retired from the Navy in December 1978.

The second condition point the fact that the director of central intelligence had only titular control over the sprawling U.S. spying apparatus. Adm. Turner said he viewed the intelligence community as rudderless and in need of a strong leader with real power.

Carter agreed to Adm. Turner's recommendation that he give the job more authority and, a year later, the president signed an executive order that gave Adm. Turner control of the budgets for conducting foreign intelligence.

After he left office, Adm. Turner said the CIA was surprised by the fall of the U.S.-backed shah of Iran, Mohammad Reza Pahlavi. The shah was forced from his own country after a bloody uprising that peaked on Nov. 4, 1979, when a mob stormed the U.S. Embassy in Tehran and took more than 60 Americans hostage.

Adm. Turner later said the CIA's failure to properly gauge the hostile climate in Iran had caused him much embarrassment in the Carter White House.

Eager to make amends, Adm. Turner leaped at the opportunity to redeem himself and the agency. The opportunity arose when the CIA learned six Americans had escaped the U.S. compound in Tehran and found sanctuary in the Canadian Embassy.

Carter tasked Adm. Turner to oversee a top-secret CIA mission to rescue the Americans, who came to be known as the "Canadian Six."

Before the agency could spirit the six Americans out of the country, the CIA needed to create a cover story for the operation.

As Adm. Turner recounted in his 2005 memoir, "Burn Before Reading," the CIA arranged to disguise the six Americans as filmmakers — "Studio Six Productions" — on business in Tehran scouting locations.

The CIA opened a functional office in Hollywood that, Adm. Turner wrote, "responded to anyone who phoned in." It placed full-page ads in Variety and the Hollywood Reporter.

Each of the six Americans was issued a new passport, driver's license, business cards and "pocket litter" that corresponded to their invented identities.

The plan worked; the six Americans, plus two undercover CIA operatives, breezed past security at the Tehran airport in January 1980 and flew out of Iran on a Swissair flight to Zurich. The succesful mission was glamorized in the 2012 movie "Argo." The film, directed by Ben Affleck — who also played the starring role — won the Academy Award for best picture.

"John Kennedy entrusted his reputation to the CIA at the Bay of Pigs and had been let down," Adm. Turner wrote. "Jimmy Carter did the same with the Canadian Six. The Agency came through for him."

Four months later, a military-led operation to rescue the remaining hostages failed after several helicopters used in the mission experienced mechanical problems. The episode proved disastrous to Carter in an election year, and he lost the presidency to Ronald Reagan. The last 52 American hostages were released after Reagan's inauguration.

Adm. Turner's first marriage, to the former Patricia Busby Whitney, ended in divorce. In 1985, he married the former Eli Karin Tjelta. In 2000, Adm. Turner survived a plane crash in Costa Rica that killed his second wife.

In 2002, he married Marion Levitt Weiss. Besides his wife, of Seattle, survivors include two stepchildren he adopted during his first marriage; four other stepchildren; 12 grandchildren; and four great-grandchildren.

He ultimately concluded he did not handle the task well. "In retrospect, I probably should not have effected the reductions of 820 positions at all, and certainly not the last 17," he wrote.

Adm. Turner made a concerted effort to salvage his reputation at the agency. In his 1985 memoir, "Secrecy and Democracy," he wrote that the agency he inherited was existing in the culture of fear created by James J. Angleton, the longtime head of the CIA's counterintelligence group of mole hunters. Adm. Turner wrote that Angleton's investigations targeted CIA employees arbitrarily and ruined the careers of honest employees.

In 1980, Adm. Turner helped arrange for Congress to approve legislation that allowed him to compensate generously any CIA employees and retirees whose careers were sidelined by Angleton.

Summing up his leadership style, Adm. Turner told The Washington Post in 1993: "I may or may not have been a good public servant, but no one has accused me of being someone else's tool. If anything, I've been excessively independent, and that has caused me all sorts of problems."

T. Rees Shapiro was an education reporter for The Washington Post. He left The Post in September 2017.