Ellen Marie Pawlikowski (born 1956) is a retired four-star general of the United States Air Force. She last served as the commander of Air Force Materiel Command at Wright-Patterson Air Force Base from June 8, 2015 to the end of July 2018, managing some 80,000 people and $60 billion in Air Force programs annually. Pawlikowski retired from the Air Force on September 1, 2018 after over 40 years of service. She currently serves on the board of directors for Raytheon and is a Judge Widney Professor at the University of Southern California's Viterbi School of Engineering. 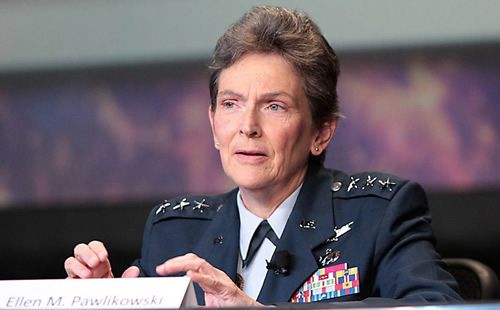 Born in East Orange, New Jersey and raised in Bloomfield, New Jersey, Pawlikowski entered the U.S. Air Force in 1978 through the ROTC program at New Jersey Institute of Technology after graduating with a B.S. in chemical engineering. She then attended the University of California, Berkeley where she received a Ph.D. in chemical engineering in December 1981, entering active duty at McClellan AFB, California, in April 1982.

Following her retirement from the US Air Force in as of 9 August 2018, Pawlikowski accepted a place on the Board of Directors of Raytheon in September. She remains a member of the National Academy of Engineering. As of August 2019, she serves as a Judge Widney Professor at the USC Viterbi School of Engineering.