Many actors might have objected to being associated throughout their careers with a character called Pussy Galore. But Honor Blackman, who has died aged 94, revelled in the notoriety of the role of the aviator she played in the James Bond film Goldfinger (1964).

Having been knocked out with a tranquilliser gun by a hench- man, the first thing Bond (Sean Connery) sees when he regains consciousness is Blackman’s face leaning over him. “Who are you?”, he asks. “My name is Pussy Galore,” she says. “I must be dreaming,” he replies. Later, after trying a few judo moves on each other, they fall into a different kind of clinch. 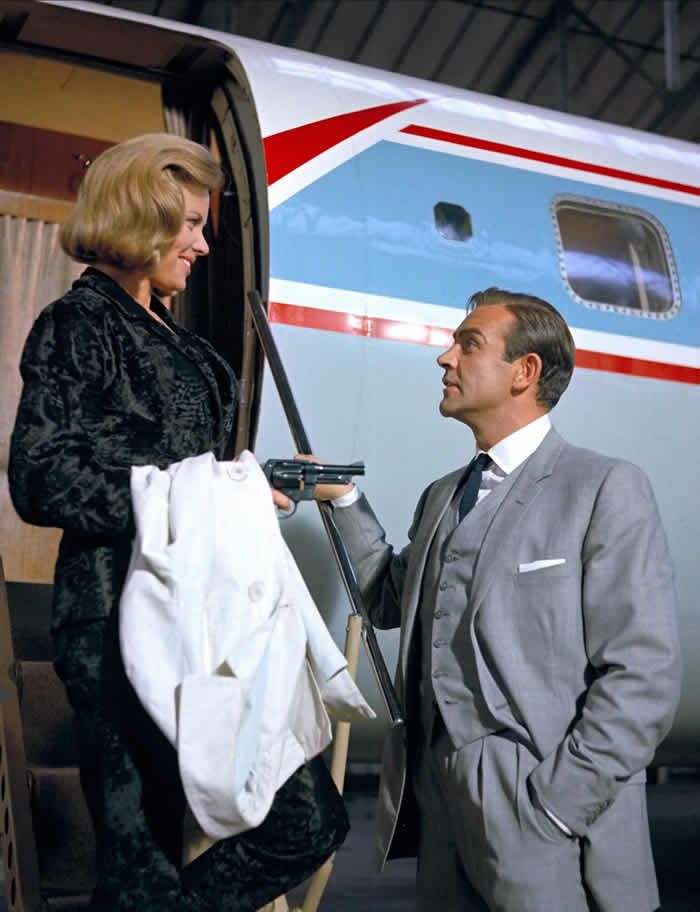 Blackman thus became, and remained, according to most polls, the top Bond girl, helped to a certain extent by the double entendre name. The producers thought about changing the character’s name but decided against it. However, the US censors refused to allow Pussy Galore to appear on promotional materials and she was consequently billed as Miss Galore. During promotion in the US, Blackman, who had already found fame in Britain as the agile, black leather-clad Cathy Gale in the television series The Avengers, took delight in embarrassing interviewers by repeatedly mentioning the character’s name.

Born in Plaistow, east London, Blackman always called herself a cockney. Her father, Frederick, a civil service statistician, who believed he was passed over for promotion because of his accent, was determined that his four children should have better opportunities.

For Honor’s 15th birthday, he offered her the choice between a bicycle and elocution lessons, and she chose the latter. “My teacher was wonderful,” Blackman recalled. “She introduced me to poetry and plays and convinced my father that I had some talent. So, after attending North Ealing primary school and Ealing County grammar school for girls, I went to the Guildhall School of Music and Drama, though only one evening a week.”

At the age of 22, Blackman started to get ingenue parts, palely loitering in mostly J Arthur Rank films. Among her better early roles was that of a middle-class girl hoping that her fiance (Dirk Bogarde) will get his idea of becoming a concert pianist out of his system in the The Alien Corn episode of the anthology film Quartet (1948); and Susie Bates, one of the three title roles in the rather dated A Boy, a Girl and a Bike (1949).

In A Night to Remember (1958), Blackman was one of the first-class passengers on the Titanic, determined not to leave the ship without her husband, and she was Norman Wisdom’s love interest as a secret agent in the second world war farce The Square Peg (1958). Her final pre-Goldfinger film was as the Greek goddess Hera in Jason and the Argonauts (1963), bickering with her husband Zeus on Mount Olympus.

In 1962, as Cathy Gale, who could get the better of any villain in a fight, Blackman joined Patrick Macnee in the second season of the TV series The Avengers, setting the pattern for intelligent, stylish and assertive women who followed her in the show and elsewhere on films and television. The song that she recorded with Macnee, Kinky Boots, did not make a great impression when released in 1964, but fared better as a piece of 1960s nostalgia when reissued in 1990. Honor Blackman and Patrick Macnee on the set of The Avengers. Photograph: Terry O’Neill/Rex Features

Because of The Avengers, Blackman was cast as Pussy Galore. She later stated that when she was playing the role of Pussy, she knew her character had been written as a lesbian in the novel, unlike in the film where, despite claiming to be immune to his charms, she is eventually bedded by Bond.

Her early demure days at Rank long behind her, Blackman settled into a number of secondary “other woman” roles. In Life at the Top (1965), Blackman was seductive and sly as a TV commentator who lures Joe Lampton (Laurence Harvey) away from his wife, and as the unfulfilled wife of a pompous aristocrat (Jack Hawkins), she has a tumble in the hay with Bosky Fulton (Stephen Boyd) in the mediocre British western Shalako (1968), though the leads were Connery and Brigitte Bardot.

After a topless scene in the unremarkable Canadian-set drama The Age of Innocence (1977) and appearing in the creaky gothic horror film The Cat and the Canary (1978), Blackman was not seen on the big screen for another two decades.

Meanwhile, she was appearing regularly on television – principally as a glamorous, young-at-heart, man-eating mother in all 96 episodes of the sitcom The Upper Hand (1990-96) – and consistently on stage.

Blackman’s West End appearances included Wait Until Dark (1966) and The Deep Blue Sea (1977) and transfers of Broadway musicals, as the baroness in The Sound of Music (1981), Peggy in On Your Toes (1984), Mrs Higgins in My Fair Lady (2006) and Fräulein Schneider in Cabaret (2007). She spent most of 1987 as Mother Superior in the musical Nunsense at the Fortune theatre.

Her return to feature films in the late 90s included a portrayal of Joy Adamson in To Walk With Lions (1999) and roles in Bridget Jones’s Diary (2001) and Cockneys vs Zombies (2012), a horror-comedy in which Blackman, returning to her roots, is a gun-toting senior citizen. In her late 80s, she toured with her one-woman show Honor Blackman as Herself, in which she sang songs , recited and told personal anecdotes.

Blackman, a keen Liberal Democrat, was never afraid to express her political views. In 2002, she refused a CBE because she was a supporter of Republic, the campaign to replace the monarchy.

“They ring you beforehand to ask if you’d like to accept, and I think they were quite shocked when I declined,” she commented. “But since I’m a republican I thought it would be somewhat hypocritical to pop up to the palace.” She always had sharp things to say about Margaret Thatcher’s period as prime minister and even took Connery to task for his status as a tax exile.

Blackman was twice married and divorced. She is survived by two children, Lottie and Barnaby, from her second marriage, to the actor Maurice Kaufmann.