My father, Muhammad Siddique, who has died aged 80, came from a farming family in a small village in Pakistan to rise to principal level as a corporate tax officer at HM Revenue and Customs.

When Muhammad first arrived in the UK in 1963, living in a bedsit in Shepherd’s Bush, west London, he struggled to get a job commensurate with his qualifications, instead working in a biscuit factory, where he complained about the colourful language used by his fellow workers (my father never swore).

However, in 1965, Muhammad got a job as a clerical officer with the Inland Revenue (now HMRC). Four years later he had an arranged marriage to Saeeda Mir in Pakistan. They bought a house in Hounslow and had a daughter, Anjum, in 1970. I was born four years later. After Saeeda died from breast cancer in 1981, my dad, having no family in the UK to help, raised us alone, never remarrying. He was a devoted father, although he could be overly strict, especially towards Anjum, before mellowing out as he aged, charming all and sundry.

Born in the small village of Beknawala in Gujrat district, to Mian Ghulam Ali, a farmer, and his wife, Niamat, Muhammad was the youngest of six children.

While his two older brothers went to work on the farm, Muhammad became the first person in the village to go to university. He went to Islamia high school in Dinga, then to the University of the Punjab, in Lahore, where, he liked to joke, he studied PPE, although it was Persian, philosophy and English, rather than philosophy, politics and economics. He graduated in 1959, then obtained a master’s in English from the same university, briefly teaching English at Government College, Sargodha, before travelling to the UK. 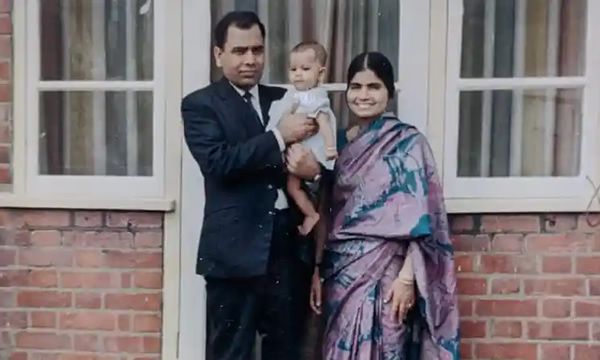 Muhammad Siddique with his wife, Saeeda, and daughter, Anjum, in 1970. After Saeeda died in 1981, Muhammad raised both his children alone, never remarrying Photograph: None

Muhammad was generous to others but personally frugal, persisting with a 14in TV for many years and, for his delicious cooking, comically continuing to use the same wooden spoon, despite it being worn down almost to the handle. He cooked cuisine from around the world but loved traditional British puddings.

Despite his sole parenting responsibilities he rose to principal level at HMRC as a corporate tax officer. When he retired, after almost 35 years, he had never missed a day through illness.

In later life, living in Richmond, south-west London, Muhammad loved going for walks and also took up golf. After being diagnosed with Parkinson’s disease in 2005, he gave up golf but otherwise stayed active. He discovered his creative side, taking art classes, and he loved Parkinson’s Can Dance, a ballet group for people with the disease. He adored and enjoyed spoiling his three grandchildren.

After breaking his hip in December 2017, he spent the final years of his life in a care home in nearby Kingston, where he was a hugely popular figure with staff, residents and visitors alike.

He is survived by Anjum and me, three grandchildren, Coroico, Luciana and Rafael, and two sisters, Fazal and Begum.