Unique and “astonishing” film footage has emerged of men and women who worked for one of Britain’s most secret second world war units.

The 11-minute silent film shows smiling staff who worked for MI6 Section VIII at Whaddon Hall in Buckinghamshire, a secret site connected to Bletchley Park. It was at Whaddon that some of the nation’s most skilled wireless operators would send out messages that had been decrypted by codebreakers.

The reel of footage, preserved in its original canister, has been given to Bletchley Park Trust by a donor who wishes to remain anonymous.

“This is without a doubt one of the most remarkable finds we’ve ever had at Bletchley Park,” said Peronel Craddock, the head of collections and exhibitions.

The silent film is mostly black and white, with some colour sections, and was filmed at different times between 1939 and 1945. It shows off-duty men and women smiling and chatting to whoever was behind the camera. There is also footage of the Whaddon hunt, a football game and a cricket match played in beautiful summer sunshine.

David Kenyon, a research historian at Bletchley Park, said it was remarkable that a camera got in to such a top secret place and that it would have been frowned upon if anyone had known.

It brought the work of Section VIII to life in a way still photographs did not, he said. “We don’t know who filmed it and the footage doesn’t give away any state secrets or any clues about the work the people in it are doing,” he said. “If it fell into the wrong hands it would have given little away, but for us today, it is an astonishing discovery and important record of one of the most secret and valuable aspects of Bletchley Park’s work.” 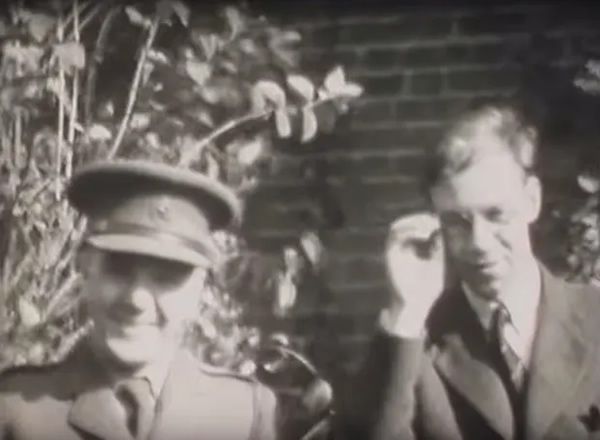 The footage was filmed at different times between 1939 and 1945. Photograph: Bletchley Park/YouTube

Curators have been able to identify a number of figures in the film including Brig Richard Gambier-Parry, the head of Section VIII; Bob Hornby, first engineer, in charge of workshops; and Ewart Holden, stores officer.

To help authenticate the film, curators showed the footage to the war veteran Geoffrey Pidgeon who worked at Whaddon Hall for Section VIII when he was just 17. His father, Horace, also worked there, managing wireless stores and providing radio equipment for agents in the field.

Pidgeon spotted his father, who died in the 1950s, in the film. “I’d never seen my father on a cinefilm before,” he said. “We didn’t have cine cameras, we had a box Brownie … I was quite shaken.”

Several figures in the film have not been identified and the trust is asking anyone who recognises someone to get in touch.

The film has also been analysed by a forensic lip reader, which will allow subtitles to be added to the film. An edit of the film and short documentary has been put on the Bletchley Park website and YouTube channel.

Bletchley Park, now a heritage attraction, was the Buckinghamshire mansion used by MI6 and the government’s code and cipher school (GC&CS), the forerunner of GCHQ, to break enemy codes. Alan Turing, one of the most famous codebreakers, was head of Hut 8 working on decrypting the German naval Enigma code.

Whaddon Hall was a smaller operation, but still hugely important. It was the place where intelligence designated as “ultra” would be sent to allied commanders in the field whether that was Montgomery in the north African desert or Patton in Normandy.

Craddock said the film was an important addition to the trust’s collection. “Not only does it show us the place and the people in wartime but it’s the first piece of film footage we’re aware of that shows any of the activity associated with Bletchley Park at all.

“We’re delighted it has been donated to Bletchley Park Trust where it can be cared for and help tell the story of the huge team effort that underpinned Bletchley Park’s successes during world war two.”