The Führer was defiant and drug-addled at the end. His wife was by his side as she took cyanide. Adolf Hitler entered his underground study with his wife, Eva Braun. He had already said farewell to his servants and poisoned his dog. Gasoline for his cremation had been sent for. He had his pistol. Eva had cyanide.

He wore his Nazi uniform jacket and black trousers. She wore a blue dress trimmed in white. They closed the door and sat beside each other on a small couch. He was 56. She was 33. They had been married for a day and a half.

No sound was heard from the study, according to historian Ian Kershaw. Aboveground, Berlin was being leveled by Russian artillery, as the epic catastrophe Hitler had launched six years earlier neared its bloody end.

Ten minutes passed. Then, Hitler’s valet, SS officer Heinz Linge, who had waited on him for a decade, smelled the odor of a discharged gun. He paused. “Everything in me resisted opening the door,” he wrote later.

As he entered, he recalled, the event he dreaded and civilization prayed for “had come to pass.”

Hitler and Braun were dead. Hitler had a bullet hole in his right temple. Braun was slumped to his left and reeked of the cyanide, which smelled like bitter almonds. “Her contorted face betrayed how she had died,” Linge recalled.

The nightmare was finally over. Too late for several million people, the man who had plunged Europe into World War II, and spread untold misery and destruction across the continent, was dead.

Only the day before, April 29, American soldiers had liberated the concentration camp at Dachau. There they had found railroad boxcars filled with bodies, and corpses piled like lumber outside the camp crematorium.

Winston Churchill called Hitler “a maniac of ferocious genius … the repository and expression of the most virulent hatreds that have ever corroded the human breast.”

Now, the dictator who had enthralled Germany and gloried in war and human suffering was dead on the couch with his pistol at his feet and blood on the carpet.

Many remembered later that Hitler had been pale and stooped for months before this day, as the weight of the awful events he had set in motion bore down on him.

He had developed a noticeable tremor in his left hand. He had bad teeth, bad breath, chronic flatulence and stomach problems. He had been treated with an array of drugs — narcotics, amphetamines, as well as leeches, hormones, vitamins and quack supplements.

He was a vegetarian and a hypochondriac. He had often stayed up until dawn and slept into the afternoon. And he was still subject to screaming rages.

He’d been loved by Braun, a former Munich shop girl, for 16 years. She had been his mistress and confidante. She had twice tried to kill herself for his attentions. But he had waited until the day before their deaths to marry her.

A local Berlin registrar named Walter Wagner was tracked down in the middle of the night and was hustled to the bunker. Wagner’s voice trembled as he conducted the brief ceremony.

The couple proclaimed before him that they were of Aryan origin — a key requirement of the Nazi code — and Braun became Mrs. Hitler for about 36 hours. Eva Braun and Adolf Hitler at his Berchtesgaden retreat before the war. (AP)

Hitler had then dictated his political and personal testaments, which were typed by a secretary on his stationery. They were utterly delusional and filled with the same anti-Semitic ravings he had spouted all his life.

“Centuries will pass away but … the hatred will ever renew itself against … international Jewry,” he declared.

Others were responsible for the war, he said: “Posterity cannot place the responsibility … on me.”

And he reminded the world that he had “left no doubt about the fact that … Jewry would … have to pay.”

His price had been 6 million lives.

As for Braun, whom he never names, “after many years of true friendship [she] came … of her own free will, in order to share my fate. She will go to her death with me at her own wish as my wife,” he declared.

Hours later, Hitler and Braun were dead on the bloody couch in a bunker 25 feet underground — the stage “on which the last act of the Nazi melodrama was played out,” historian Hugh Trevor-Roper wrote. Hitler's command bunker in Berlin in July 1945. He and his wife killed themselves there April 30. (William Vandivert/Life Picture Collection/Getty Images)

Linge and others in the bunker — including Joseph Goebbels, the notorious Nazi propaganda minister, and Martin Bormann, Hitler’s powerful right-hand man and “most faithful party comrade” — now had to dispose of the bodies and keep them out of enemy hands.

(Among the others in the bunker were Goebbels’s wife, Magda, and their six children, Helga, Holde, Hilde, Heide, Hedda and Helmut. All were doomed.)

Hitler had told a top aide, SS officer Otto Günsche, that he feared his corpse would go on display “in some waxworks in Moscow,” Kershaw wrote in his biography of Hitler.

He had ordered Günsche to prevent this. Günsche hurried to get enough gasoline for cremation. Forty-seven gallons were found and delivered to the ground-level garden of the bunker, according to Trevor-Roper.

Inside the death room, Linge spread blankets on the floor. He did not look at Hitler’s shattered head: “My … aim was to finish and get away.” Braun’s body was removed and passed from one officer to another up the flights of stairs to the garden where the gasoline waited.

Linge and two others carried Hitler. The bodies were placed on the ground. Russian artillery crashed close by.

Secrecy was vital, for fear that if the bunker guards saw that Hitler was dead they would flee, Linge said.

But the scene was accidentally observed by two guards, one of whom saw Hitler’s damaged head, which was “repulsive in the extreme,” according to Trevor-Roper.

The gasoline was poured over the bodies. Goebbels produced some matches, but the wind was too strong to light them. Someone suggested using a hand grenade.

The ever-efficient Linge returned to the bunker and made a torch from some documents. Bormann ignited it and threw it on the corpses, which instantly caught fire. Black smoke billowed into the sky.

Then Linge, Bormann, Goebbels, Günsche and two others raised their hands in one last “Heil Hitler” salute.

The bodies burned into the evening. Occasionally, soldiers would pour on more gasoline, until there was almost nothing left. Two of Hitler’s body guards buried what remained in the garden. 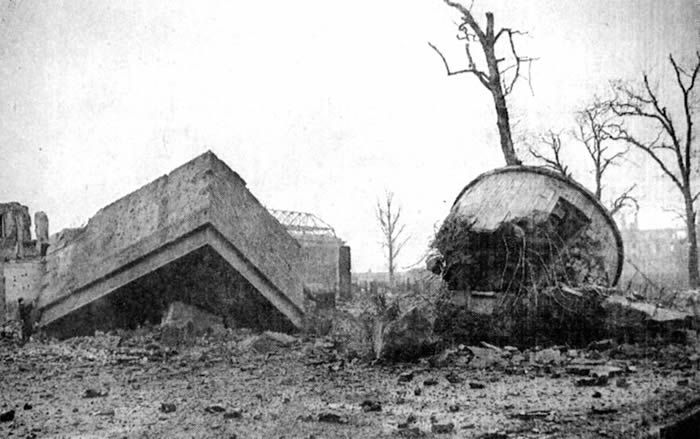 An undated photo of Hitler's bunker in Berlin. (Itar-Tass/AP)

Soviet soldiers later scoured the grounds for the body of the man who had savaged their country, Kershaw wrote.

They found part of a lower jawbone and two dental bridges. They put them in a cigar box and showed them to a dental technician who had worked for Hitler’s dentist.

The technician checked records and determined that the jawbone and one of bridges were Hitler’s and that the other bridge was Braun’s, Kershaw wrote.

Linge went back to the bunker and began burning evidence: documents, the bloodstained carpet, Hitler’s uniforms and medicines.

The next evening, Magda Goebbels instructed a medical assistant to give each of her six children, who were ages 4 to 12, a shot of morphine to knock them out. Then Hitler’s doctor, Ludwig Stumpfegger, the keeper of the cyanide, crushed a vial in each child’s mouth.

“The world that comes after the Führer … is not any longer worth living in and therefore I took the children with me,” Magda wrote an older son who was a prisoner of war. “They are too good for the life that would follow.”

A short time later, Magda and Joseph Goebbels walked into the garden, took their cyanide and were shot for good measure.

Seven days later, with much of Germany in ruins, the war in Europe ended, and with it the insanity that was inspired by Adolf Hitler.