Jennie Lee (born Virginia Lee Hicks, October 23, 1928 – March 24, 1990) was an American stripper, burlesque entertainer, pin-up model, Union activist, and a minor role movie actress, who performed several striptease acts in nightclubs during the 1950s and 1960s. She was also known as "the Bazoom Girl", "the Burlesque Version of Jayne Mansfield", and "Miss 44 and Plenty More". 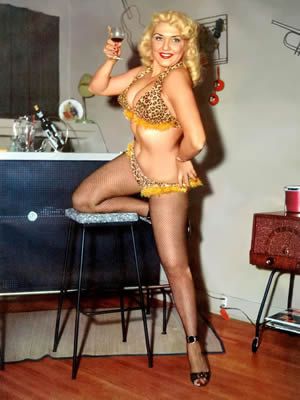 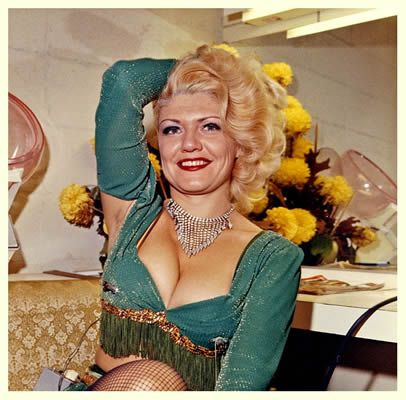 Lee's act centered on how fast she could get her pastie propellers to spin and how dizzy she could make the audience. Due to her figure (42D"–26"–37), she became known as "The Bazoom Girl," "The Burlesque Version of Jayne Mansfield," and eventually, "Miss 44 and Plenty More". By the early fifties she broke into acting with minor roles in Peek-A-Boo (1953), Abandon (1958), Cold Wind in August (1961), and 3 Nuts in Search of a Bolt (1964) with Mamie Van Doren. Despite her ambitions of mainstream stardom, she found herself typecast in side roles, and never got her acting career off the ground. In 1955, she helped start a union for dancers, The Exotic Dancers' League of North America (or EDL), acting as the club's first president. During this time in Los Angeles, dancers' pay rates were extremely low and the EDL helped fight these matters as well as pushing for improved working conditions.

Lee's own salary was extremely low as well, and she was forced to live in run-down studio apartments. The dancer tried to keep this from her friends, claiming in a 1980s interview: "They would've thought I was a hooker for sure." During her career Lee appeared on the cover of several magazines, including: Stare in 1954; Risk in 1957; Frolic in 1958, among many others. She wrote an article on herself for a 1955 spread in Modern Man. Besides her life as a stripper, Lee was a noted pin-up girl throughout her career, but like most of her contemporaries, never posed nude, though in later years she did. She also wrote a monthly column on the burlesque and nightclub scene for several years that appeared in a variety of magazines.

As the years went by, the EDL became more of a social organization for retired dancers and collectible items associated in their acts. Lee gathered press pictures, gowns, pasties, and G-strings of burlesque dancers for the organization and displayed them at businesses she ran, including her nightclub/bar The Sassy Lassy. The collection would become part of the Exotic World museum in Helendale, California, which was founded by Lee. By the late 1960s, an aging Lee lost interest in her own burlesque career but was still interested in supporting the next generation of Exotic Dancers and memorializing her own generation of burlesque performers. With her death at age 61 in 1990, fellow burlesque dancer, Dixie Evans, took over the Exotic World museum and helped keep burlesque and Lee's legacy alive. In 1958, she was immortalized in the song named after her, recorded by Jan and Dean, which was their first Top 20 pop hit. The song was credited to Jan & Arnie (Dean Torrance was in the army at the time of the recording. His friend Arnie Ginsburg, recorded the song with Jan Berry).