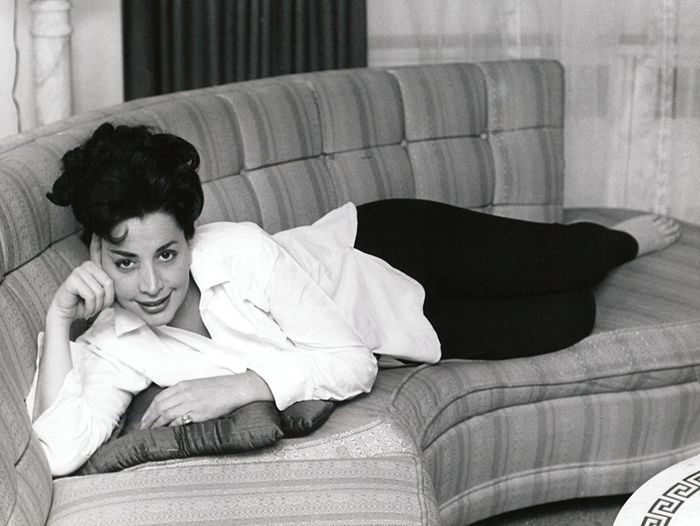 AN ARTIST OF RARE TALENT and formidable purpose, Rosalind Elias sang 687 performances with the Metropolitan Opera in New York and on tour, beginning with her 1954 company debut, as Grimgerde in Die Walküre, and ending in 1996, as Háta in The Bartered Bride. In her thirty-five seasons on the Met roster, Rosalind Elias was a key component in the company’s abiding reputation for artistic and musical excellence: she was a true artist who invested every role she sang with vocal beauty, dramatic truth and shining grace of spirit.

Born in Lowell, Massachusetts to Lebanese immigrant parents, the youngest of thirteen children, Rosalind had early dreams of being a movie star but soon directed her ambition toward a career in opera. She studied at New England Conservatory, at the Accademia Nazionale di Santa Cecilia in Rome and at the Berkshire Music Center at Tanglewood and sang with the New England Opera Company before making her Met debut a few weeks before her twenty-fourth birthday. The Met was to remain Rosalind’s artistic home for the rest of her life.

In her early seasons at the Met, Rosalind proved her worth with vivid work in supporting roles in a number of high-profile productions—a new staging of Andrea Chénier (Bersi, 1954); an English-language Magic Flute, conducted by Bruno Walter (Genie, 1956); the company premiere of Offenbach’s Perichole (Virginella, 1956); and Olga in the standard-setting 1957 staging of Eugene Onegin by Peter Brook, who remained one of Rosalind’s favorite directors. In 1958, Rosalind began a new stage of her career when she created the role of Erika in the Met’s world premiere of Samuel Barber’s Vanessa. When Rosalind protested Erika’s lack of a solo, Barber wrote “Must the winter come so soon,” a brief aria that Rosalind imbued with a combination of star quality and restrained, elegant melancholy that no other Erika has ever equaled. Barber chose Rosalind to create the role of Charmian in the world premiere of Antony and Cleopatra, the opera that opened the Met’s home at Lincoln Center in 1966. The production was directed by Franco Zeffirelli, another favorite colleague of Rosalind’s.

Rosalind sang more than fifty roles during her years at the Met, with especially memorable turns in the company premiere of Nabucco (Fenena, 1960); Zeffirelli’s staging of Falstaff (Meg Page, 1964); and Robert O’Hearn’s beloved production of Hansel and Gretel (Hansel, 1967, and the Witch, 1980). A list of Rosalind’s most frequent roles at the Met is a testament to her versatility: her assignments ranged from voluptuous bad girls such as Bersi, Lola in Cavalleria Rusticana and Maddalena in Rigoletto to the Mozartean refinements of Dorabella, Zerlina and Cherubino. Her dark-eyed beauty and fluid command of both comedy and pathos won Rosalind success as Olga in Eugene Onegin, Carmen and Nancy in Martha; her trouser-role characterizations encompassed the awkward eagerness of Siebel in Faust as well as the aristocratic manners of Octavian in Der Rosenkavalier.

Rosalind was a superb, scrupulous musician who was much in demand for orchestral repertoire as well as opera. The list of great conductors who collaborated with her was headed by Leonard Bernstein, Karl Böhm, Erich Leinsdorf, James Levine, Lorin Maazel, Dimitri Mitropoulos, Pierre Monteux, Thomas Schippers, Georg Solti and Bruno Walter.

Away from the Met, Rosalind’s starring roles included Sari in Noel Coward’s Bitter Sweet in summer stock; Baba the Turk in The Rake’s Progress at Glyndebourne and Santa Fe Opera; Carmen at the Vienna State Opera; Erika and Dorabella in Salzburg; Mrs. Lovett in Sweeney Todd at New York City Opera and the Old Baroness in Vanessa in Monte Carlo, Los Angeles and New York. She sang leading roles in the world premieres of Ricky Ian Gordon and Michael Korie’s The Grapes of Wrath (Minnesota Opera, 2007) and David Carlson’s Anna Karenina (Florida Grand Opera, 2007). In 2011, when she was in her eighties, Rosalind made her Broadway debut, singing eight shows a week as Heidi Schiller in Stephen Sondheim’s Follies.

In 2012, Rosalind joined the board of the Metropolitan Opera Guild; the following year, she was appointed one of the inaugural members of the Guild’s Artists’ Council. Rosalind’s connection to the arts—to theater, films and dance as well as opera—remained pure and passionate throughout her life. Rosalind savored her memories of the past but always looked to the future with eagerness; she relished the challenge of trying something new. In 2019, when Rosalind was given an OPERA NEWS Award, she chose to direct her acceptance speech to the young singers in the audience, advising them, “Nothing ventured, nothing gained.”

Rosalind’s good humor, generosity and loving nature were legendary. Her professional manners were immaculate, built on her own resolute personal discipline and her infinite capacity for kindness. She was a superlative artist, an extraordinary woman and a wonderful friend. —F. Paul Driscoll