Known to many as Charles, Evers was the older brother of civil rights activist Medgar Evers, the Mississippi NAACP leader who was killed by a sniper in 1963. 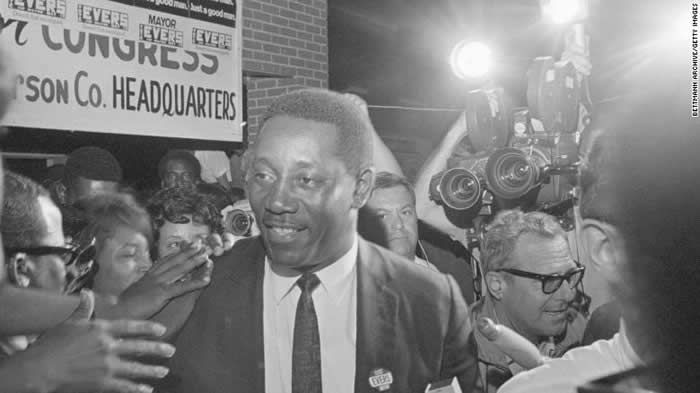 Charles Evers is cheered outside his campaign headquarters after he was elected mayor of Fayette, Mississippi, in 1969.

Charles Evers was considered one of the pioneers of the civil rights movement. He became the NAACP's state voter registration chairman in 1954, and after his brother's death, Charles Evers took over his leadership roles and began drives to register Black voters.

In 1969, Charles Evers made history when he was elected mayor of Fayette, becoming the first Black mayor in Mississippi. "Rest In Peace, Charles Evers," tweeted Mississippi Gov. Tate Reeves. "He was a civil rights leader and a true friend to me and so many Mississippians. His memory will always be cherished and honored."

US Sen. Roger Wicker, a Mississippi Republican, called Evers "an absolute classic" and said, "I doubt we will ever see another like him."

Charles Evers was an absolute classic. I doubt we will ever see another like him. My full statement: https://t.co/lSDA8wivbZ pic.twitter.com/InJlguitzd

Throughout a career that also included being a businessman and radio host, Wicker said, "Evers was never afraid to challenge the accepted norms or fly in the face of political correctness.

"As an elected official he navigated the circuitous route from Freedom Democrat to Independent to Republican, even serving as a Trump elector in 2016. He used his powerful personality and platform to change Mississippi for the better."