The composer Sibelius wrote to Ida Haendel saying, ‘I congratulate myself that my concerto has found an interpreter of your rare standard’. Photograph: Jelle Pieter de Boer

The Polish-born violinist Ida Haendel, who has died aged 96, enthralled audiences around the world with a combination of classical rigour and romantic warmth – the mix of “ice and fire … simply mind-blowing” that one reviewer found in a recording of the Sibelius concerto. It was taken from her penultimate Promenade concert at the Royal Albert Hall, London, in 1993; the last of her 68 Proms came the following year, with the concerto by Britten.

When Haendel started at the Proms, with the Beethoven concerto (1937) and the Brahms (1938), the concerts were still held at the Queen’s Hall, off Regent Street, and their conductor, Henry Wood, was one of her early champions. She went on to give Proms performances of works from Mozart to Stravinsky, with televised accounts of Shostakovich’s First Concerto (1976) and, in the season’s last night, Saint-Saëns’s Third (1989).

In Haendel’s recording of the Britten (1977), she restored octaves added by its first performer, Antonio Brosa, but dropped by the composer in a later revision: Haendel’s security in octaves and perfectly judged use of the expressive slide, the portamento, were features of a highly characteristic sound that combined great accuracy with intense lyricism. Coupled with the Britten was the concerto by Walton, who praised the recording. Endorsement from another composer, Sibelius, came after a 1948 Finnish radio broadcast of his concerto: “You played it masterfully in every respect ... I congratulate myself that my concerto has found an interpreter of your rare standard.”

The Testament label reissued her early concerto recordings, and set the Sibelius from 1993 alongside a concert account of the Elgar, both with the City of Birmingham Symphony Orchestra under Simon Rattle. The Hänssler label released six performances from the 1960s on CD, including the Dvořák, Khachaturian and Bartók Second, with the Stuttgart Radio Symphony Orchestra. While her playing was quite unsentimental, she knew exactly how to make it tell.

A native of Chelm, in the centre of interwar Poland, Haendel told her story in her autobiography Woman With Violin (1970). At the age of three and a half she amazed her mother, Fela, by reproducing a song on the violin. Her portrait-painter father, Nathan Hendel, denied the chance to become a violinist himself by his rabbi father, invested all his energies and hopes in her progress. Ida Haendel as a girl. At the age of three and a half she amazed her mother by reproducing a song on the violin. Photograph: Alamy

Following their move to Warsaw to further Ida’s studies, her father discovered that the renowned Polish violinist Bronisław Huberman was to be at a reception. The little girl started playing while Huberman was absorbed in conversation; when he heard her, he broke off and said: “I have in my time heard a great many talents, but this is the greatest of them all.”

The visiting Joseph Szigeti responded similarly, and agreed to teach her free of charge – provided she travelled to Paris with her father first. When they arrived, Szigeti was leaving for a tour of the US, but they found a teacher in Carl Flesch, whom they eventually followed to London.

Haendel’s debut there came in a Queen’s Hall recital in December 1936. To satisfy the London County council that she would be 14 for a Sunday performance of the Brahms concerto with Wood in January 1937, her father came up with a certificate showing a birthdate in 1923, according to a profile-writer for the Strad magazine. The impresario Harold Holt advertised Haendel’s “phenomenal success” when Wood asked her back that March for the Beethoven, which was then programmed for the Proms the following September.

Haendel greatly admired the stars of the silver screen and emulated many of them in trimming a few years off her age in her autobiography. But even with a birth year of 1923 rather than 1928, her early achievement was astonishing: she won the Huberman prize for young Polish performers with the Beethoven in 1933, and came seventh in the inaugural Wieniawski competition in Warsaw in 1935. First and second places went to Ginette Neveu and David Oistrakh; the death of Neveu in an aeroplane crash in 1949 left Haendel as the sole woman among the great violin soloists in the years following the second world war, and a role model to many.

Any later mention of her age saw an affronted Haendel gleefully blaming the LCC and berating enquirers with a certificate giving 1928 as the year of her birth. In much the same spirit, she embellished her family name so that it shared a spelling with that of the Saxon composer born Georg Friedrich Haendel. As she was quick to point out, they could have been related.

During the second world war, she performed in factories, in Myra Hess’s National Gallery concerts and for British and US troops. From 1940 to 1947, she recorded a wide range of works for violin and piano for Decca, some of which were reissued in 2000 as a companion to a new recording of works by Szymanowski, Bartók and George Enescu – his Third Sonata. 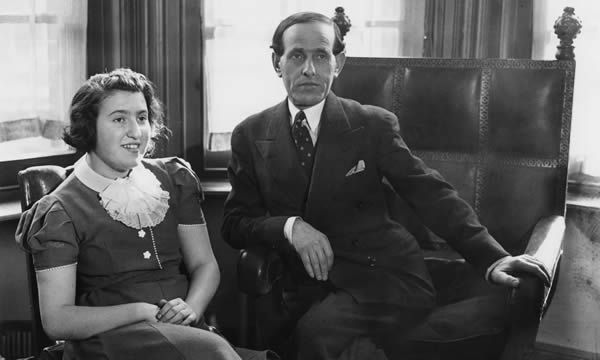 Ida Haendel with her father, Nathan Hendel, in 1938, by which time they were living in London. Photograph: Central Press/Getty Images

Haendel’s initial concerto recordings – of Bruch’s First (1948) and the Beethoven (1951) – were made possible by Walter Legge, the medium’s great impresario, who brought her together with Rafael Kubelík and the Philharmonia Orchestra. Kubelík, thoughtful and undemonstrative, was a conductor to whom she warmed; with Sergiu Celibidache she had a closer and more tempestuous friendship, which resulted in an acclaimed recording of the Brahms concerto (1955).

The Brahms and Sibelius became her signature works and she was dismissive of thoughtless performing habits such as slowing up in the final bars of the former. When, with the Bournemouth Symphony Orchestra, the conductor Paavo Berglund teased her by doing so very pointedly, she advanced towards the podium, wagging her finger reproachfully.

Before the war she had appeared in the Netherlands and France: as soon as it was over, she was keen to tour further afield, including the US, even if travel then had to be by sea. She enjoyed a notable success in the Soviet Union (1966), went with the London Philharmonic Orchestra to the first Hong Kong arts festival (1973), and with the BBC Symphony Orchestra to China (1981), the first western soloist to appear there after the Cultural Revolution.

In 1952 she moved to Montreal, and in 1979 to Miami, but continued to use London as a base, and in 1991 was appointed CBE. Her utter dependability in the standard repertory overshadowed her readiness to explore less familiar works, though in one European Broadcasting Union concert she coupled two relatively neglected concertos, the Schumann and the Szymanowski Second.

The one thing that her career lacked was a sustained series of new recordings in the 1960s and 70s, leaving her feeling that she never had the recognition she deserved. Ida Haendel’s security in octaves and perfectly judged use of the expressive slide, the portamento, were features of a highly characteristic sound. Photograph: Boston Globe/Getty Images

The Dutch director Paul Cohen’s documentary I Am the Violin (2004) pointed to other preoccupations that lasted all her life: “I was never a child!” she declares; when visited by her elder sister Alice, her piano accompanist on some early recordings, she noted ruefully that if she had had Alice’s looks, she “could have conquered the world”.

None of this was of the least concern to concert audiences, for whom the sight of her slight figure bustling purposefully to the front of the orchestra promised a display of commitment none the less intense for being carefully controlled.

As she assured an aspiring young soloist in Christine Jezior’s Polish TV documentary Ida Haendel: This Is My Heritage (2011), the point of the exercise was to make people fall off their chairs. She adored the whole business of being on stage and when presented with a post-concerto bouquet for the thousandth time displayed the wide-eyed gratitude that she might have as a girl.

Playing concertos was her overriding concern, and in recitals a limited range of sonatas tended to recur – those by Mozart in B flat, Beethoven in C minor, Brahms in D minor and the Franck – along with Chausson’s Poème and Bach’s Chaconne; her recording of Bach’s complete works for unaccompanied violin was released in 1996. It took till 2000, and again in 2001, for her to appear in recitals at the Wigmore Hall in London; in 2006 she returned to Chelm for a concert, captured on a CD; and in 2010 she gave a National Gallery recital to commemorate the wartime musicmaking there. The release by Sony of Chaconne (2013), a recital recorded in 2008, saw her back in London for a week of activities including some playing.

A force of nature throughout, as a girl she could not wait to get started; many decades later, she had no wish to stop.

Haendel is survived by two nephews.