Regis Philbin at his home in Greenwich, Conn., in 2013. He was a television personality for nearly six decades.Credit...Karsten Moran for The New York Times

Regis Philbin, the talk- and game-show host who regaled America over morning coffee with Kathie Lee Gifford and Kelly Ripa for decades, and who made television history in 1999 by introducing the runaway hit “Who Wants to Be a Millionaire,” died on Friday night. He was 88.

His death was announced by his family in a statement. The statement did not say where he died or specify the cause.

In a world of annoyances, Mr. Philbin was the indignant Everyman, under siege from all sides — by the damned computers, the horrible traffic, the inconsiderate people who were always late. There was no soap in the men’s room. Hailing a cab was hopeless. Losing a wallet in a rental car? Fuhgeddaboudit! Even his own family was down on him for buying a chain saw!

And was it possible, he wondered, to ask ever so softly in a crowded pharmacy where to find the Fleet enemas without the clerk practically shouting: “Whaddaya want, buddy? A Fleet enema?”

Aggravation is an art form in his hands,” wrote Bill Zehme, the co-author of two Philbin memoirs. “Annoyance stokes him, sends him forth, gives him purpose. Ruffled, he becomes electric, full of play and possibility. There is magnificence in his every irritation.”

From faceless days as a studio stagehand when television was barely a decade old, to years of struggle as a news writer, TV actor and sidekick to Joey Bishop, Mr. Philbin, with patience, determination and folksy, spontaneous wit, climbed to pre-eminence relatively late in life on talk and game shows.

Regis, as he was universally known, was a television personality for nearly six decades and an ABC superstar since 1988, when his New York talk show went national. But he also wrote five books, appeared in movies, made records as a singer, gave concerts and was a one-man industry of spinoffs, from shirts and ties to medical advice and computer games.

By almost any measure — ubiquity, longevity, versatility, popularity — he succeeded beyond the wildest dreams of a stickball-playing kid from the Bronx. Near the end of his career, Forbes put his net worth at $150 million, and Guinness World Records said he was the most-watched person in television history, with more than 17,000 hours of airtime — equivalent to two full years, night and day. (The previous holder of that record, Hugh Downs, died this month.) Mr. Philbin and Kathie Lee Gifford interviewed Hillary Clinton in 1996, when she was the first lady. “Live! With Regis and Kathie Lee” was a fixture of morning television from 1988 to 2000.Credit...Steve Friedman/Buena Vista Television, via Associated Press

Unlike most late-show monologues, Mr. Philbin’s were personal: self-mocking accounts of life’s woes and misadventures. The rest of the show might be anything: Ms. Gifford talking about her pregnancies or her dogs, Chardonnay and Chablis; Regis dancing with Chippendale hunks, unable to get his pants off over his shoes, hopping about in his underwear.

Mr. Philbin and Ms. Gifford often exchanged barbed put-downs — he chided her for being late; she called him a jerk — but they rarely drew blood, even when the topics were the infidelities of her husband, the sportscaster Frank Gifford, or allegations that child labor was being exploited in Honduras to make the Kathie Lee clothing line for Walmart. (She denied knowledge of sweatshop conditions and campaigned to protect children from them.)

Along with homemaking advice, cooking demonstrations and celebrity interviews, Mr. Philbin had a predilection for sports guests. A Notre Dame alumnus, he talked football, boxing and basketball like the teammate he had never been. He worked out in a gym regularly, but he also shamelessly exaggerated his own prowess. He once put on wrestling togs and skull-and-crossbones tattoos for a WrestleMania skit.

“Our show is Reege living out his jock dreams by racing across Columbus Avenue in traffic to catch passes from Joe Namath and Terry Bradshaw,” Ms. Gifford wrote in a memoir. “It’s Reege mussing up wrestling manager Freddie Blassie’s hair and getting a chair tossed at him; shadowboxing with Razor Ruddock; weight lifting with Joe Piscopo; jousting with American Gladiators Lace and Gemini.” Mr. Philbin in 2007 with Kelly Ripa, who replaced Ms. Gifford as co-host in 2001, and who became known for playing his chatterbox sidekick. Credit...Buena Vista Television/Associated Press

After Ms. Gifford’s departure and an interregnum with no regular co-host, Ms. Ripa joined the show in 2001 and was judged a refreshing change: sprightly, irreverent, clever at playing the chatterbox sidekick to the irascible Mr. Philbin. He often made a joke of looking bored while she rattled on.

In one episode, the “American Idol” star Clay Aiken playfully put a hand over her mouth to shut her up.

“That’s a no-no,” she snapped, complaining that she had no idea where his hand had been.

While still doing his morning show, Mr. Philbin in 1999 became host of the original American version of “Who Wants to Be a Millionaire.” Modeled after a highly successful British quiz show, it soared to popularity overnight as the highest-rated prime-time game show in television history. At a time when game shows were often seen as disreputable ghosts of the past, an astonishing 30 million viewers tuned in three nights in a week.

The show, whose concept was so emphatic that its creators put no question mark in the title, single-handedly lifted ABC to first place from third among the networks; made Mr. Philbin ABC’s biggest star; raised the stock value of the network’s parent company, Disney; and revolutionized ideas about what constituted a prime-time hit.

A tournament-style show in which contestants answered consecutive multiple-choice questions for cash sums rising to $1 million, “Who Wants to Be a Millionaire” was addictive. It was designed around relentlessly rising tension, with throbbing music, flashing strobe lights, a loudly ticking clock and Mr. Philbin, the inquisitor, posing questions on a scale of silly to impossible and then demanding, “Is that your final answer?”

“To sit in the audience, with the lights underneath the Plexiglas floor swiveling in all directions and a huge camera boom sweeping overhead, is to feel as if one were inside a giant pinball machine,” Elizabeth Kolbert wrote in The New Yorker in 2000.

“The music is driving me crazy!” Mr. Philbin screamed during one show. He winced when he had to read some of the easier multiple-choice answers. (What makes shirt collars stiff? Starch, glucose, Viagra …) “Who Wants to Be a Millionaire” made Mr. Philbin ABC’s biggest star. He hosted an 11-night prime-time reincarnation in 2009, on the 10th anniversary of its debut.Credit...Donna Svennevik/ABC

As ratings skyrocketed, other networks scrambled to develop comparable game shows — Fox called its version “Greed” — and “Who Wants to Be a Millionaire” was credited with reviving the game show genre and with paving the way for reality shows as a cornerstone of television programming. A surge of unscripted, competitive reality shows, including “Survivor,” “American Idol” and “Big Brother,” followed in its wake.

Mr. Philbin hosted “Millionaire” from 1999 to 2002, sometimes five nights a week, as its popularity rose, and, perhaps inevitably, faded. Critics said overexposure led the public to tire of it. Meredith Vieira replaced him on a retooled syndicated daytime version of the show in 2002 and remained its host until 2013. The show has had several hosts since then; it was recently revived for a limited run on ABC with Jimmy Kimmel as host and features celebrity contestants.

In 2004, Mr. Philbin returned for 12 episodes of “Who Wants to Be a Super Millionaire,” offering prizes up to $10 million, and in 2009, on the 10th anniversary of the first broadcast, he hosted an 11-night prime-time reincarnation.

Regis Francis Xavier Philbin was born in Manhattan on Aug. 25, 1931, to Francis and Filomena Boscia Philbin. His father, a personnel director, settled the family in the Bronx. Regis, named for a Roman Catholic high school in Manhattan that his father had attended, was long believed to be an only child, but he revealed in 2007 that a brother 20 years younger had died.

“I never talked about him because he was a very private guy,” Mr. Philbin said in 2007 on “Live! With Regis and Kelly.” “I’ve respected that all these years.”

Regis, a skinny boy who took up weight lifting, graduated from Cardinal Hayes High School in the Bronx in 1949 and earned a bachelor’s degree in sociology at the University of Notre Dame in Indiana in 1953. After two years in the Navy, he began his career as a stagehand at KCOP-TV in Los Angeles. He soon became a news writer.

Mr. Philbin is survived by his wife, his daughters and four grandchildren. Danny Philbin, who worked for the Defense Department, died in 2014. 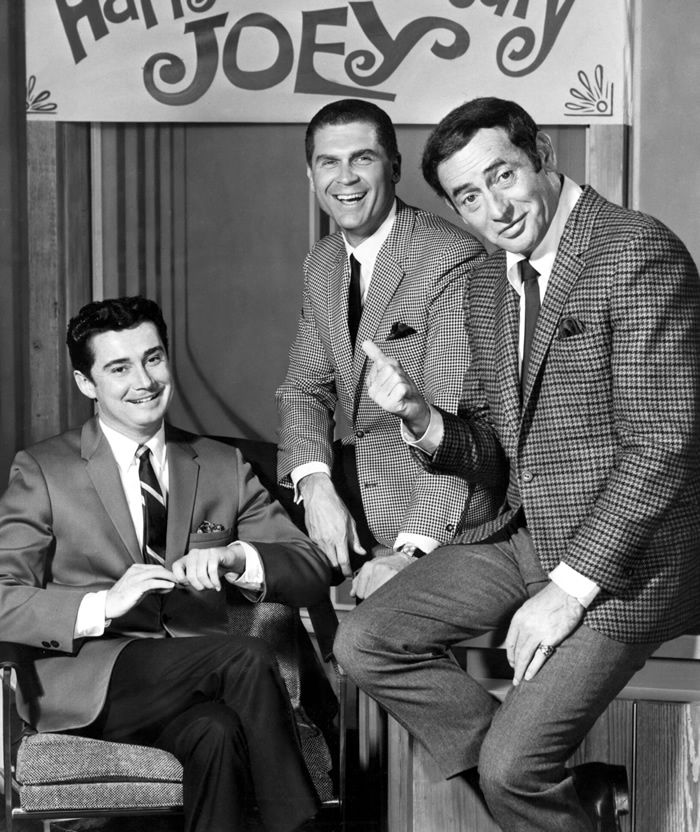 Mr. Philbin, left, with Joey Bishop, right, and the bandleader Johnny Mann on “The Joey Bishop Show,” which for two years battled “The Tonight Show” for late-night ratings on ABC.Credit...ABC, via Everett Collection

In the early 1960s, Mr. Philbin was a sportscaster and news anchor in San Diego, and in the 1964-65 season he hosted his first talk program, “The Regis Philbin Show,” on Saturday nights at KOGO-TV. It was syndicated nationally for 13 weeks and later aired on KTTV in Los Angeles.

From 1967 to 1969, he was the announcer and sidekick on “The Joey Bishop Show,” one of ABC's many attempts to challenge the ratings dominance of Johnny Carson’s “The Tonight Show” on NBC. In the early ’70s he hosted “Regis Philbin’s Saturday Night in St. Louis” on KMOX, a CBS affiliate there. From 1975 to 1981 he co-hosted “A.M. Los Angeles,” a top-rated show on KABC, first with Sarah Purcell and then with Cyndy Garvey.

In 1983, Mr. Philbin teamed with Ms. Garvey in New York on WABC’s “The Morning Show.” Two years later, Kathie Lee Johnson — she became Gifford after a divorce and remarriage — replaced Ms. Garvey as his co-host. In 1988, the show went into national syndication and became “Live! With Regis and Kathie Lee.”

From 1982 to 1987, he also hosted “Regis Philbin’s Lifestyles,” a magazine show on Lifetime that addressed health, diets, exercise and beauty. Throughout the ’80s and ’90s he was a professional whirlwind, with appearances on sitcoms, talk and game shows, dramas, comedies, variety shows, Miss America pageants and specials for Thanksgiving, Christmas and New Year’s Eve. He also appeared in a number of films, usually as himself.

Mr. Philbin, who lived in Manhattan near the ABC studios and in Greenwich, Conn., was showered with awards, including Daytime Emmys for “Live! With Regis” and “Who Wants to Be a Millionaire” in 2001, for lifetime achievement in 2008 and for “Live! With Regis and Kelly” in 2011. He was inducted into the Television Hall of Fame in 2006.

Among those paying tribute to Mr. Philbin on social media was President Trump. In a post on Twitter, Mr. Trump called Mr. Philbin “one of the greats in the history of television” and added, “He kept telling me to run for president.” 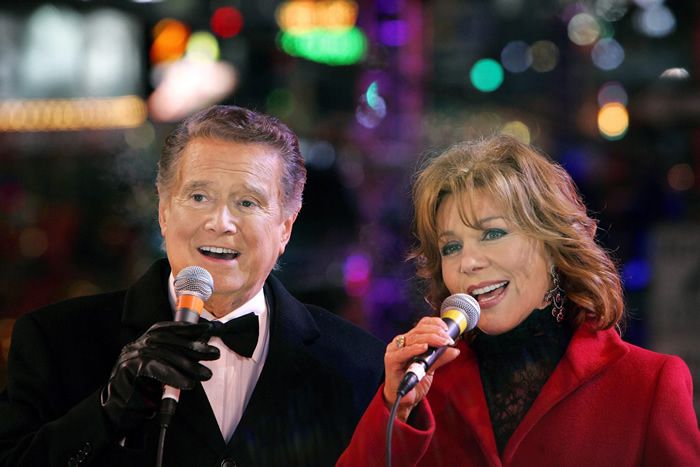 In his last book, he recalled going on the “Late Show With David Letterman” after announcing his departure from daytime television. The two old friends talked airily of retiring together and riding off into the sunset. Paul Shaffer’s band struck up a galloping cowboy rhythm, complete with harmonica.

“So you and I are on the horses,” Mr. Letterman said. “We’re slumped in the saddles, and we ride down Broadway. And then we get a kid to come out on Broadway. And we have him saying, ‘Shane! Come back, Shane! Shane, come back!’ And then we ride right out the door and right down to Times Square.”