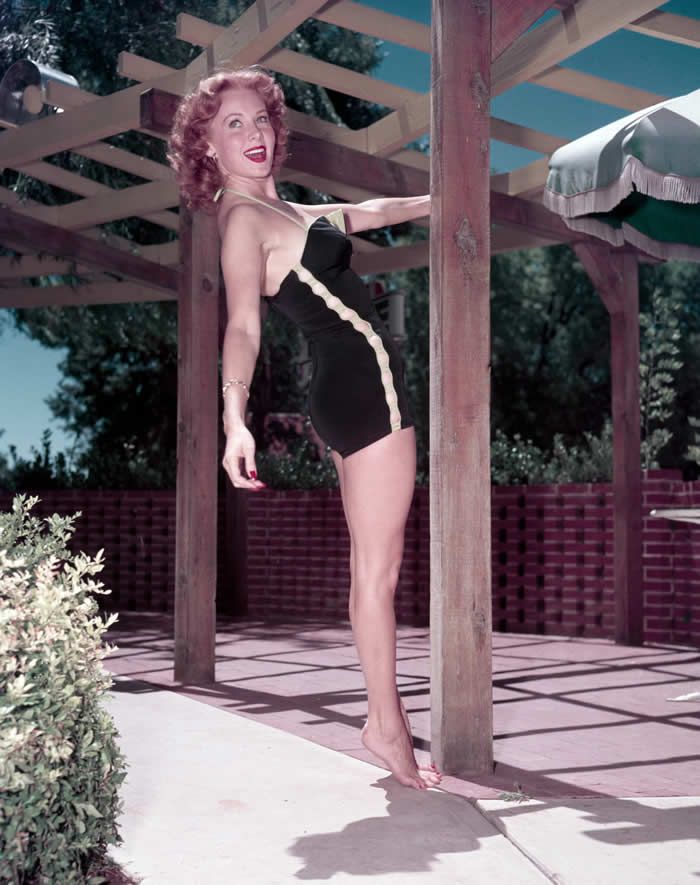 Rhonda Fleming, the red-haired actress who became a popular sex symbol in Hollywood westerns, film noir and adventure movies of the 1940s and ’50s, died on Wednesday in Santa Monica, Calif. She was 97.

Her death, in a hospital, was confirmed by Carla Sapon, her longtime assistant.

Ms. Fleming’s roles included those of a beautiful Arthurian princess in the Bing Crosby musical version of Mark Twain’s novel “A Connecticut Yankee in King Arthur’s Court” (1949); a gambler and the love interest of Wyatt Earp (Burt Lancaster) in “Gunfight at the O.K. Corral” (1957); an amorous duchess in Bob Hope’s comedy “The Great Lover” (1949); and the somewhat less bad sister of Arlene Dahl’s bad-girl character in “Slightly Scarlet” (1956), which might be described as a Technicolor noir. Ms. Fleming as an amorous duchess with Bob Hope in the 1949 film “The Great Lover.”Credit...Associated Press

In Jacques Tourneur’s “Out of the Past” (1947), she played a supporting role as a nervous secretary, alongside Robert Mitchum and Kirk Douglas. She was a turn-of-the-century New England secretary who is murdered by a serial killer (George Brent) in “The Spiral Staircase” (1946). Another supporting role, she said, was her favorite: the overdressed, overcoiffed stepsister to Jean Simmons’s character in the thriller “Home Before Dark” (1958).

Like her peer Maureen O’Hara, Ms. Fleming was sometimes referred to as the Queen of Technicolor; both actresses had glamorous red hair, green eyes and fair skin. But in later years, she looked back on that as a drawback.

The studios “never wanted more from me than my looking good and waltzing through a parade of films like ‘The Redhead and the Cowboy,’” she told People magazine in 1991, referring to a 1951 western she made with Glenn Ford.

She sang in several of her films and was part of a gospel quartet, the Four Girls, with Jane Russell, Connie Haines and Beryl Davis in the ’50s. In 1957 she embarked on a Las Vegas career, performing at the brand-new Tropicana hotel. Later, she appeared at the Hollywood Bowl and toured with Skitch Henderson and his orchestra.

On the brink of her 50th birthday, she made her Broadway debut. Part of an ensemble cast that included Myrna Loy, Alexis Smith and Kim Hunter in a 1973 revival of Clare Boothe Luce’s comedy “The Women,” she was Miriam Aarons, the relatively minor role played by Paulette Goddard in the 1939 film. Reviewing the production in The New York Times, Clive Barnes described Ms. Fleming as “all good nature as the lush with the heart of a martini.”

Rhonda Fleming was born Marilyn Louis on Aug. 10, 1923, in Hollywood, the younger of two daughters of Effie Graham, a model and actress, and Harold Cheverton Louis, who worked in the insurance industry.

While she was still a student at Beverly Hills High School, Marilyn was spotted by an agent and given a few small film roles. David O. Selznick, the powerful movie producer, saw her, put her under contract and changed her name to Rhonda Fleming.

After a few uncredited screen appearances (in her first three movies she played Dance-Hall Girl, Girl at Dance and Girl on Train), she made her official film debut in “Spellbound” (1945), Alfred Hitchcock’s psychological thriller. She played a sex-hungry mental patient being treated by Ingrid Bergman’s character; she often told interviewers that she had to look up the word “nymphomaniac” to know exactly what her character was supposed to be. Ms. Fleming, second from left, in 1962 with Richard M. Nixon, who was then the Republican candidate for governor of California. With them were her fellow actors George Murphy, who later became a United States senator, and Jane Powell.Credit...Associated Press

Over the next 15 years she made some three dozen films. Four of her 1950s movies starred Ronald Reagan, including “Tropic Zone” (1953), in which his character saved her character’s banana plantation.

Although she tended to be cast as a fresh-faced but sexy American girl, she did play the occasional foreign type. She was Cleopatra in “Serpent of the Nile” (1953), opposite Raymond Burr as Mark Antony. In “Little Egypt” (1951), she portrayed an exotic belly dancer at a world’s fair — although her character turned out to be just a New Jersey girl with a fake accent.

In the early 1960s, she turned almost exclusively to acting on television, where she was active until the mid-1970s.

She returned to the big screen in “Won Ton Ton, the Dog Who Saved Hollywood” (1976), a comedy remembered largely because so many stars of Ms. Fleming’s era agreed to be in it. Her character’s name was Rhoda Flaming. Technically, Ms. Fleming’s final screen appearance was in “Waiting for the Wind,” a 1990 half-hour television drama in which she played a religious farm wife opposite Mitchum. Her last film was “The Nude Bomb,” a 1980 spy comedy based on the 1960s sitcom “Get Smart,” in which she played Edith Von Secondberg, an international fashion designer.

In 1978 she married Ted Mann, owner of the Mann Theaters chain. They were together until his death in 2001. Two years later she married Darol Carlson, who died in 2017. She is survived by her son, Kent Lane, as well as two granddaughters, five great-grandchildren and two great-great-grandchildren, Ms. Sapon said.

Ms. Fleming once said that she never officially retired; she just chose to work less. In a 1993 interview with The Toronto Star, relaxing at her California home with Mr. Mann, she said, “My husband recently asked me if I’d seen any movie I wanted to appear in.” She went straight for a specific role. “I said yes, the dinosaur in ‘Jurassic Park.’”