John L. “Jack” Melnick, a lawyer and former member of the Virginia General Assembly best-known for sponsoring legislation that created a state fund to compensate victims of major crime, died Aug. 21 at Virginia Hospital Center in Arlington. He was 78. 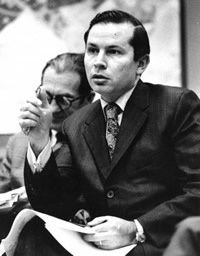 The cause of death was heart ailments, son-in-law Mike Scott said.

Mr. Melnick, a specialist in estate, trust and probate law, began practicing law in Arlington in 1961. He spent 25 years as a commissioner in chancery of the Arlington County Circuit Court and, at the time of death, he was a senior member of the Falls Church-based firm Melnick & Melnick, where he practiced law with his son Paul.

He served three terms in the General Assembly in the 1970s and ran unsuccessfully for the Democratic Party nomination for Virginia attorney general in 1977. The year before his bid for attorney general, he sponsored what is now the Criminal Injuries Compensation Fund, which uses court fees to reimburse victims of felonies and serious misdemeanors for otherwise unreimbursed expenses.

The legislation, reportedly modeled on laws in England and New Zealand and more than a dozen other states, highlighted Virginia’s “moral responsibility” for victims of crime. Initially, reimbursements were limited to $10,000 per victim; they now have a $25,000 limit.

The fund is administered by the Virginia Workers’ Compensation Commission. The fund has processed more than 25,000 claims since its inception and annually awards between $3 million and $5 million, Criminal Injuries Compensation Fund Director Mary Vail Ware said. Besides court fees and other assessments on offenders, the fund accumulates money available through grants from the federal Office for Victims of Crime.

Ware said that, in 2008, the fund began reimbursements for all sexual assault forensic examinations in Virginia. It also has been used to provide financial support during mass-casualty incidents in the state, including the Sept. 11, 2001, terrorist attack at the Pentagon and the 2007 Virginia Tech massacre.

The fund, Ware said, is used for “flights and quick counseling and funerals” until other funds become available.

He collected antique Fords, including a Model A and a Model T.

Survivors include his wife of 51 years, Marjory Helter “Margi” Melnick of Arlington; four children, John Melnick II of Reston, Paul Melnick of Arlington and Kathy Scott and Laura Thompson, both of Leesburg; a brother; a sister; and nine grandchildren.