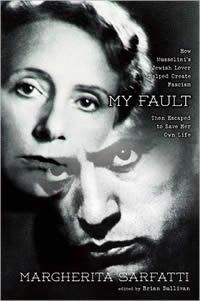 Margherita Sarfatti first met Benito Mussolini in 1911 at the socialist daily Avanti! In what became a turbulent love affair she emerged as an important writer, art critic, and major adviser to the founder of the Fascist party. Even though she converted to Catholicism, she was cast aside once Hitler came to power and fled to South America in 1938.

During her long exile where she constantly feared for her children who had remained in Italy and were in danger during the war, Sarfatti decided to tell the story of her relationship with Mussolini and the role she played in many important Fascist artistic, cultural, and ideological issues until 1934. Most of Italy's modern architecture and many of its painters owe Sarfatti both their success and lasting legacy.

At first she wrote her memoir in English under the title My Fault. But in 1945 a daily newspaper in Buenos Aires, Critica, published a Spanish version in fourteen installments. In the full text Sarfatti bares all about her stormy relationship with the intensely womanizing dictator whom she knew was quite incapable of any kind of monogamous relationship. Yet the attraction remained long irresistible and that passion jumps off these pages with unrelenting strength.

Brian Sullivan is America's foremost authority on Fascist Italy. After earning a PhD at Columbia he taught at Yale University and at the War College. With the late Phil Cannistraro he is the co-author of Il Duce's Other Woman (William Morrow, 1993) a major biography of Margherita Sarfatti. He lives in Rockville, Maryland.

Dr. Brian Sullivan a leading authority on Fascist Italy. After a PhD from Columbia, he taught at Yale and the U.S. Naval War College, and is the author of innumerable articles and books including The Duce's Other Woman (Morrow 1993.)