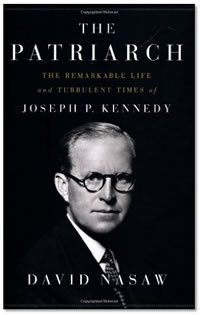 “David Nasaw has succeeded in bringing Joseph P. Kennedy in The Patriarch to life in chilling, in-depth color.” Joseph P. Kennedy was an ambitious man, “unbridled” and “relentless,” writes David Nasaw. He was ambitious for himself and for his family. In fact, JFK’s father differentiated little between himself and his family: He was his family and his family was he. He was, in other words, a patriarch of the old school, the type who expects boundless loyalty, considers this love, and gets away with it by reason of his big cash. This David Nasaw does not explicitly say. Throughout the book the author rather occasionally goes out of his way in order to highlight the virtues of Joseph Kennedy. This is not surprising considering that he was asked to write the biography by two of Joseph Kennedy’s children, namely, Ambassador Jean Kennedy Smith and late Senator Edward Kennedy.

Nonetheless, the story Mr. Nasaw tells, in conjunction with his mostly dispassionate writing style, leaves little doubt that, however remarkable Joseph Kennedy may have been, he was oppressive and narrow minded as well. On page two of the introduction, Mr. Nasaw writes that even though “there is some truth in [the] allegations” invariably advanced against Joseph Kennedy during and after his lifetime, namely that he was “an appeaser, an isolationist, an anti-Semite, a Nazi sympathizer, an unprincipled womanizer . . . a bootlegger . . . Wall Street scoundrel . . . steal[ing] elections for his son,” the truth is part of “a larger, grander, more complicated history.” David Nasaw finds no evidence that Joseph Kennedy was a bootlegger or a Wall Street scoundrel. Indeed, as first President of the Securities and Exchange Commission (SEC) in 1934 he was among those who sought to introduce effective regulation in the stock market.

But that was long after Joseph P. had “in the booming 1920s . . . made his money investing in stocks” and in the 1930s “made more by selling them short.” In the 1940s and 1950s he then moved to real estate and oil, as those were fields less regulated and with lower tax rates. In other words, Joseph Kennedy was a razor-sharp businessman with an extremely self-serving approach to money. As Roosevelt would later say of him in one of his moments of exasperation, “Joe . . . is and always has been a temperamental Irish boy, terrifically spoiled at an early age by huge financial success; thoroughly patriotic, thoroughly selfish and thoroughly obsessed with the idea that he must leave each of his nine children with a million of dollars apiece.”

Joseph Kennedy did also not steal the elections for his son, whereby his money was not an insignificant factor in the various campaigns run by Jack Kennedy and later by Robert Kennedy. But his politics were problematic in more than one way, which is why in the 1950s he was often an embarrassment for his two sons and was eventually convinced to stay away from the limelight. As Ambassador to Britain in the period 1938 to 1941 he was, as claimed, an appeaser, an isolationist, an anti-Semite and, even if not a straight-out Nazi sympathizer, he did advocate that America shift away from democracy toward fascism. Joseph Kennedy’s public speeches and the numerous letters he sent to friends or family members provide ample evidence of this.

In brief, he believed that Jews had too much influence in both Europe and the United States; that the “solution” to Hitler’s (and the world’s) Jewish problem was banning Jews to one of Britain’s colonies; that the United States had no business getting involved in European affairs; and that if they did, that would spell disaster for domestic economic policies. For a long time he was in favor of negotiating with Hitler and would later adopt a similar position vis à vis Stalin. Last but not least, he was a close friend of McCarthy and offered his “services” to Hoover’s FBI, mentioning his Jewish friends as a good source of information regarding the inroads being made by Communism. On the face of this one would think that he—and with him, his family—would have been disqualified from holding political office. That this did not happen had to do with two main factors. First, at the time, he was not the only one to hold these views, both in America and in Britain. Second, Roosevelt, and with him the Democratic Party, needed J. P. Kennedy as a sponsor—especially for mobilizing the Catholic vote.

Joseph Kennedy was never one to mince his words. That spelled his doom as Ambassador. But privately, as a prominent member of his time’s jet set, it was something he felt proud about. By contrast, he was much less proud about his second daughter Kathleen marrying a Protestant in Britain, and was embarrassed and fearful about his first daughter, Rosemary, who was psychologically imbalanced and mentally retarded. He was the only one to attend Kathleen’s funeral following her plane crash in France; and he never visited Rosemary after committing her to a Wisconsin clinic following a lobotomy operation that failed terribly.

Joseph Kennedy’s patriarchal authority is among else evidenced by the silent compliance of all other family members to his rules. Rose Kennedy began to visit her daughter Rosemary only after Joseph Kennedy died. Most of her brothers and sisters hardly ever saw Rosemary after they grew up. And still, they all adored their father, venerating his engagement in their lives and the happy holidays at Hyannisport—and that despite hardly ever seeing him, even during those same holidays. Both Joseph and Rose Kennedy took an intense interest in their children but from a distance and especially when they were—or promised to be—successful. Joseph Kennedy spent more time in Palm Beach and New York than in Boston; Rose Kennedy traveled most of the time. But everybody was very rich and when the family did meet, they all had a ball. Theirs is a strange story, definitely of a bygone era, and David Nasaw has succeeded in bringing Joseph P. Kennedy in The Patriarch to life in chilling, in-depth color.

Liana Giorgi, PhD, is a freelance social scientist and policy consultant. Previously, she worked in the not-for-profit sector as coordinator of multinational research projects with diverse expertise in sociology, political science, public policy, and ethics of research. Ms. Giorgi, who originally comes from Cyprus, studied at the Massachusetts Institute of Technology and the University of Cambridge and currently lives in Vienna, Austria. She is the author of numerous books, articles and research reports. Her most recent academic book, co-authored, is Festivals and the Cultural Public Sphere. Her debut novel Burnout: The Strange Case of Annie Hix is available on Amazon as ebook.