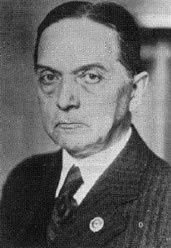 Karl Theodor Vahlen (June 30, 1869, in Vienna, Austria-Hungary – November 16, 1945, in Prague, Czechoslovakia) was an Austrian-born mathematician who was an ardent supporter of the Nazi Party. He was a member of both the SA and SS. Vahlen studied in Berlin from 1889 and received his doctorate there in 1893. From 1883, Vahlen was a Privatdozent in mathematics at the Königsberg Albertina University. In 1904, he began teaching at the University of Greifswald, and in 1911 he became an ordinarius professor there. Vahlen had joined the Nazi Party (NSDAP) in 1922. From 1924, he was the first Pomeranian district leader of the NSDAP. In 1924, Vahlen incited a crowd at the University against the Weimar Republic, which resulted in taking down flags of the Republic. The University placed him on leave for political abuse of his function, and in 1927 he was dismissed without a pension.

Upon his dismissal, Friedrich Schmidt-Ott increased the funding Vahlen had been receiving for his work for the German Navy since 1922. Vahlen worked briefly as an assistant in Johannes Stark’s private physics laboratory. In 1930 Vahlen returned to his birthplace and became a lecturer of mathematics at the Technische Hochschule Wien. Once Adolf Hitler became Chancellor of Germany on 30 January 1933, Vahlen’s career gained momentum and flourished in Germany as a result of his support for the NSDAP. In that year, he became an ordinarius professor of mathematics at the Humboldt University of Berlin, as successor to Richard Edler von Mises, who emigrated from Germany as a result of the Law for the Restoration of the Professional Civil Service, which was in part directed against professors with Jewish ancestry, which von Mises had. After 1933, Vahlen was a strong advocate of Deutsche Mathematik, a parallel movement to Deutsche Physik, advocated by the Nobel Laureate physicists Philipp Lenard and Johannes Stark; both movements were anti-Semitic. From 1934, he was ordinarius professor at the University of Berlin, a position he held until attaining emeritus status in 1937.

During the period 1933 to 1937, Vahlen served as third vice president of the Kaiser-Wilhelm Gesellschaft. From May 1934, he was Assistant Secretary and head of the Science Office at the Reichserziehungsministerium (Acronym: REM, translation: Reich Education Ministry.). Actually, the Science Office was split into two components, WI, a continuation of the Prussian department, and WII, the army office for research. Vahlen was head of WI, but, in actuality, the deputy chief, the chemist Franz Bachér ran WI. From this position, in 1936, Vahlen began publishing the journal Deutsche Mathematik, for which the Berlin mathematician Ludwig Bieberbach was the editor; in the journal, political articles preceded the scholarly articles. On 1 January 1937 Vahlen was relieved of his duties at the REM. Through a manipulation of the election process by Vahlen and his supporters, he became president of the Prussian Academy of Sciences in 1938.

It was in 1933 that Vahlen joined the Sturmabteilung (SA), and in 1936 he switched to the Schutzstaffel (SS), in which he eventually held the rank of SS-Oberführer. Theodor Vahlen was the son of the German philologist Johannes Vahlen. Vahlen gained his doctorate with Beiträge zu einer additiven Zahlentheorie, and continued to specialise in number theory, but later turned to applied mathematics. Theodor Vahlen was an early proponent of geometric algebra. His 1902 paper in Mathematische Annalen recounts William Kingdon Clifford's construction of his 2n dimensional algebra with n − 1 anti-commuting square roots of −1. Vahlen also recounts split-biquaternions and parabolic biquaternions originated by Clifford. But Vahlen cites Eduard Study most of all since Study also focussed on the geometric motions (translation and rotation) as implicit in algebra. Since Vahlen explores some of the fractional-linear transformations of Clifford algebras, his work contributed to the development of inversive ring geometry. The subject of relativity was a polemical issue in Nazi Germany. As Mark Walker writes. Eventually Vahlen adopted the common tactic of ascribing the theory of relativity to other "Aryan" physicists, thereby accusing Einstein of plagiarism, but also making the theory palatable to the National Socialist state.