Jean Ballarin, who on a day in 1941 drew his saber, spurred his horse and galloped headlong into French military history, died on Feb. 3 in his home in Paris. He was 84 and was recalled as the last man to have led a French cavalry charge. 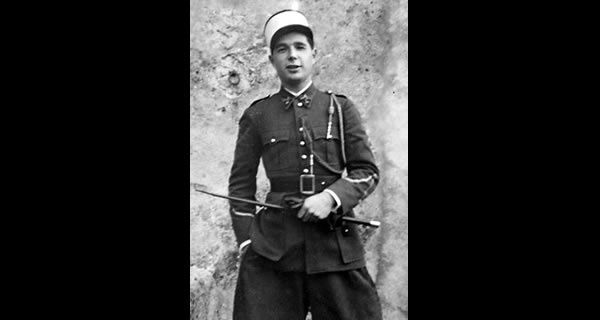 As cavalry charges go, or went, the one Mr. Ballarin led on Jan. 2, 1941, was not much to write home about. The two dozen Moroccan horsemen under his command simply happened to spot an Italian Army encampment at an Eritrean oasis at Umbrega. Mr. Ballarin, then a 25-year-old noncommissioned French officer, ordered an impromptu attack, scattering the much larger enemy force before it could organize a defense.

There were few casualties on either side, and for all the exhilaration of the whooping charge across the dusty Eritrean terrain, the skirmish was hardly worth more than a military footnote -- even to Mr. Ballarin's own distinguished career. He took part in fierce fighting at Alamain and elsewhere in North Africa, serving as the leader of de Gaulle's personal honor guard in Algiers, and he took part in the Anvil invasion of southern France and the eventual capture of Hitler's Bavarian mountain retreat and its famous Tea House aerie.

Indeed, Mr. Ballarin, a native of La Villedieu, near Poitiers in central France, who joined the army at 18 and was eventually sent to French-controlled Syria, had assured his place in the annals of French warfare simply by continuing to fight a war. For in the days after the fall of France in June 1940, almost to a man the French military had sworn allegiance to the collaborationist Vichy regime. Its leader, Field Marshal Henri Philippe Petain, commanded such respect that even French forces stationed abroad, beyond German reach, submitted to Vichy control.

The French forces in Syria had especially close ties to Vichy, but when de Gaulle issued his famous call to arms from London on June 18, 1940, Mr. Ballarin was among those who rallied to his Free French cause.

Under the guise of holding training maneuvers, Capt. Paul Jourdier, the commander of the First Squadron of the First Regiment of the Spahis Light Cavalry, assembled his 80 or so men near the border with Lebanon and the British Palestine Mandate. Then he gave them the choice of staying behind or following him across the border to join the British, as Mr. Ballarin and some 60 others did. It was a small start to a mighty journey that would win glory for Mr. Ballarin and the Spahis.

Within a month of the Umbrega charge, the First Squadron had exchanged its horses for American-made armored vehicles and mobile guns and joined the running fight against the tanks of the German field marshal Erwin Rommel, and begun an expansion that would eventually include three more squadrons, one of which was given the honor of liberating Paris in 1944.

For his service, Mr. Ballarin received a more personal honor, the coveted Cross of the Liberation, awarded to those deemed to have made the most significant contributions to the Free French cause. Of the 1,059 holders of the award, about 170 are still alive.

Mr. Ballarin, who married de Gaulle's private secretary, Germaine-Marie Cedart, in Algiers in 1944, with the de Gaulles in attendance, remained in the Army until 1962, retiring as a lieutenant colonel. He then worked for a Paris insurance company until 1980.

In addition to his wife, his survivors include four sons, Charles, Bertrand, Jean-Francois and Jacques.

A World War II cavalry charge may seem quaint, but in a war in which the Germans used 600,000 horses in their invasion of Russia, it was not quite an anomaly. The Italians themselves staged a cavalry charge against the British in Eritrea later in January, 1941.

The last American cavalry charge did not come until a year later, on Jan. 16, 1942, when a polo-playing lieutenant, Edwin Price Ramsey, led his 26th Cavalry platoon against Japanese soldiers on the Bataan peninsula in the Philippines.

And Mr. Ballarin's Umbrega charge was not the last cavalry charge involving the French. Six months later, in an operation that underscored the significance of Mr. Ballarin's decision to break with Vichy and join the Free French forces in Africa, a British cavalry unit charged a Vichy French encampment in Syria.

The British, who seem to have a special fondness for cavalry, did not stage their last charge of the war, by the Gwalior Lancers in Burma, until 1944, but what is regarded as the last British cavalry charge did not come until 1953, when the North Frontier Tribal Police rode down a Mau Mau camp in Kenya.