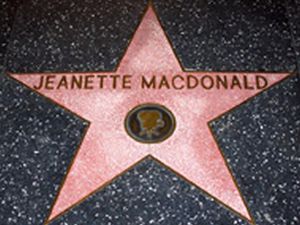 Jeanette MacDonald was a famed red-haired singing star, often acclaimed as one of Hollywood's truly great ladies because her career never had been blemished by scandal. She is remembered best as the screen partner of Nelson Eddy.

MGM teamed them in 1934 in "Naughty Marietta," and the public clamored for more.

In the seven years that followed, they were paired romantically in seven more movies, "Rose Marie," "Maytime," "Girl of the Golden West," "Sweethearts," "New Moon," "Bittersweet" and "I Married an Angel."

MacDonald made her first professional stage appearance at the Capital Theater in New York in 1920 in "The Demi-Tass Revue."

She worked her way up from the chorus to starring roles on Broadway. In 1928, while she was appearing in "Angela," actor Richard Dix saw her performance and was entranced. He persuaded her to take a screen test.

A year later, director Ernst Lubitsch chose her to play the queen opposite Maurice Chevalier in "The Love Parade."

MacDonald followed this with "The Vagabond King" with Dennis King, "Let's Go Native" with Jack Oakie, "Monte Carlo" with Jack Buchanan, "The Lottery Bride" with John Garrick, "All for a Man" with Reginald Denny, "Don't Bet on Women" with Edmund Lowe and Roland Young, "Annabelle's Affairs" with Victor McLaglen, "One Hour With You" and "Love Me Tonight" both with Chevalier, "The Cat and the Fiddle" with Ramon Novarro, then "The Merry Widow," again with Chevalier.

MacDonald appeared in motion pictures and stage plays. She sang concerts, recitals and grand opera. She did recordings and went on radio and TV. She made several appearances in Las Vegas.