After months of diplomatic wrangling Argentina invades the Falkland Islands 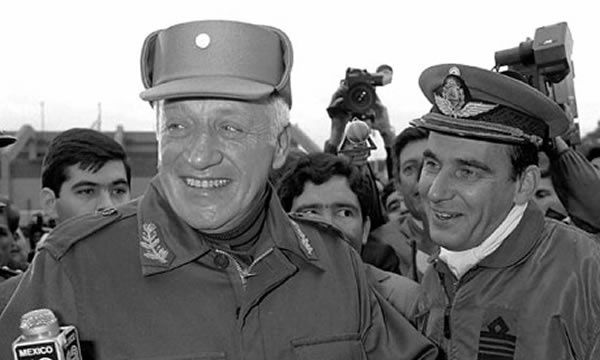 The British Government, having failed to deter the Argentinian invasion of the Falkland Islands by diplomatic pressure or an early show of naval strength, was this morning coming to terms with the hard fact that the South Atlantic archipelago and its 1,800 inhabitants are almost certainly beyond military recovery.

The Defence Secretary, Mr John Nott, hinted as much last night when he said although a substantial new naval task force was being assembled a decision on whether to send it will not be taken for several days.

His admission followed a day of deeply embarrassing confusion for Mrs Thatcher's Administration, during which Whitehall was unable to confirm the invasion many hours after the Argentinians began celebrating it in Buenos Aires. Casting desperately around for an effective response, Britain's hopes now seem to centre on the possibility of American leverage on the Argentinian regime.

The Argentine navy said in a communiqué that its casualties occurred when British Marines resisted an initial landing in the attack early yesterday. A captain was killed and a lieutenant and corporal wounded. The communiqué did not mention any British casualties. The Argentine military governor warned islanders that "resistance to Argentine rule would be punished" after the surrender of the British Governor, Mr Rex Hunt.

A local radio station broadcast martial music for most of the day but later said that the British troops, the Governor, and heads of government departments were being flown off the island and would be returned to England.

The blackout of radio communications with Port Stanley meant that the first official confirmation of the invasion was not released in Whitehall until 6pm - about 16 hours after it began and with MPs no longer around to hear the grim news. The first message apparently came from HMS Endurance, the ice patrol ship investigating the illegal Argentinian landing on South Georgia with which the crisis began.

Last night the Cabinet held its second emergency meeting of the day. The Vice Chief of Naval Staff and the Air Chief Marshal were present.

Although there was no general mobilisation, Army units were recalled from leave last night and special army posts set up at all main line stations into London for men returning to rejoin their regiments. Blackboards spelt out the message: "All ranks 3rd Parachute Regiment. Return to barracks immediately." Messages were tannoyed every 15 minutes to alert soldiers on leave.