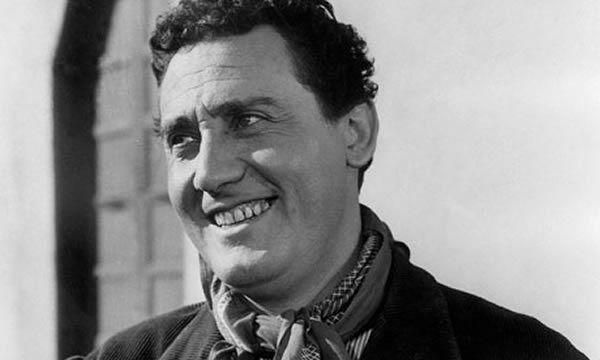 For one of his early jobs, Alberto Sordi dubbed Oliver Hardy's role in the Laurel and Hardy films

Alberto Sordi, who has died aged 82 after a heart attack, was an Italian icon. The film parts he played parodied some of the worst characteristics of the average Italian but, along with Vittorio Gassman, Ugo Tognazzi and Nino Manfredi, he made up a quartet that was Italy's equivalent of the Ealing comedy school.

In the 1980s, the public television corporation RAI put together the Story Of An Italian series. Using clips from Sordi's films, this provided a cavalcade of national history. The titles of some of the most successful - The Seducer, The Bachelor, The Husband, The Widower, The Traffic Cop, The Moralist - indicate how he helped to create a genre that mocked Italian mores.

Internationally, Sordi was remembered for his performances in Federico Fellini's first films, Lo Sceicco Bianco (The White Sheik, 1952) and I Vitelloni (1953). But he later starred, directed and coscripted more than 150 films.

Sordi discovered his comic vocation when, as an altar boy in Rome, he raised giggles when he waved the censer too boisterously. At 10, he was singing in the Sistine Chapel choir, thanks to his father, a tuba player at the Rome opera house. At 16, he went to Milan to record his own fairy tales and started at drama school there. He gave up when a teacher told him he would never have an acting career unless he got rid of his Roman accent.

Back in Rome, it was, ironically his accent that won him radio and music hall popularity. He also won a job dubbing Oliver Hardy's role in the Laurel and Hardy films. When he used his bogus English accent for Olly, - pronounced Oh-lee-oh - in a music hall sketch, it brought the house down.

In 1937, he worked as an extra in the historical spectacular, Scipione l'Africano. His first important role was as an air force cadet in Tre Aquilotti (Three Eaglets 1941), a fascist war picture. During the war, Sordi mixed with actors, antique dealers, writers and cartoonists in the Piazza di Spagna cafes. Among his closest friends were Vittorio De Sica and Fellini.

After the war, Sordi got noticed when Fellini cast him in The White Sheik as the hero of romantic picture story magazines pursued by a naive provincial girl on honeymoon. Sordi's performance brought him his first good reviews. In Fellini's next film, I Vitelloni, he played an immature simpleton - a role that made him famous.

The year after I Vitelloni, Sordi played leading roles in 13 films. One was a short, in which he played a freakish Roman who passed himself off as a native of Kansas City. Repeating the character in a full-length film, Un Americano a Roma (An American in Rome, 1954), he conclusively established himself as a star. In 1955, director Luigi Zampa and Sicilian satirical writer Vitaliano Brancati put him at the centre of 50 years of Italian expediency in L'Arte Di Arrangiarsi (The Art Of Convenience).

Sordi's new stature won him roles in several "auteur" films, including Luigi Comencini's Tutti A Casa (Everybody Go Home, 1960) a bitter story of a soldier's moral and physical difficulties after the 1943 Italian armistice; Alberto Lattuada's 1962 Mafioso, in which Sordi was an honest Sicilian smuggled into New York as a hit man; and Dino Risi's Una Vita Difficile (A Difficult Life, 1962), in which he was a resistance fighter-cum-communist journalist entangled in the 1960s capitalist jungle.

His international roles included a cameo in Ken Annakin's Those Magnificent Men In Their Flying Machines (1965). Filming in London inspired him to write the story with which, in 1966, he debuted as a director, Fumo Di Londra (London Smoke). The story of an anglophile art lover (Sordi), it was conventional in its exploitation of clichés such as country house weekends and fox hunts, but valiantly tried to show a changing England through foreign eyes.

In 1972, Luigi Comencini directed Sordi in Lo Scopone Scientifico (Scientific Poker), alongside Bette Davis. Sordi found in Davis his over-the-top match. She was quoted as saying she had enjoyed making the film "except for the presence of an actor who I think was named Sordi".

In 1977 he gave his best performance. He played a middle-class Italian in Mario Monicelli's hard-hitting Un Borghese Piccolo Piccolo (A Very Small Petit Bourgeois), who, after seeing his child killed in a robbery, takes vengeance.

In 1984, Sordi directed and coscripted Tutti Dentro (Everybody Inside), in which he played a magistrate who has warrants for corruption served on ministers and businessmen. This was nearly a decade before magistrate Antonio Di Pietro revolutionised Italian politics by doing just that.

Politically conservative, Sordi's social criticism was sometimes mocked by the left. In the 1980s, Nanni Moretti, father of a new school of comedy, hurt him deeply by sarcastically saying in one of his films: "Italians deserve Alberto Sordi!"

He certainly didn't disdain female company, but Sordi never married, which was often attributed to his meanness, about which even he could be ironic. A loner, he enjoyed a quiet life with his dogs and his two sisters in a splendid villa near the Caracalla Baths. On his 80th birthday, he was made Mayor of Rome for the day. In 2002, after 190 films, he announced his retirement.

His last film as actor-director was Incontri Proibiti (Forbidden Encounters, 1999), in which he played an elderly engineer who meets a blonde bombshell with a taste for elderly men. It flopped, so he changed the title to Marry Me Daddy - and hoped it would be rereleased. Earlier this week it was premiered on RAI-TV. The same night Rome's City Hall stayed open late - so that thousands could pay tribute at his coffin.