Nuon Chea denies responsibility for deaths of 1.7 million people in Cambodia during the 1970s at UN-backed tribunal. 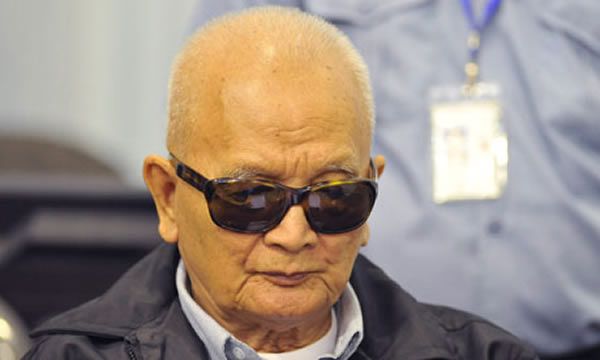 The Khmer Rouge number two, Nuon Chea, at the UN-backed hearing in Cambodia

A former leader of Cambodia's brutal Khmer Rouge regime has told a court he and his comrades were not "bad people", denying responsibility for the deaths of 1.7 million people during their 1970s rule and blaming Vietnam for any atrocities.

Nuon Chea's defiant statements came as a UN-backed tribunal began questioning him and two other Khmer Rouge leaders in court for the first time.

The long-awaited trial began late last month with opening statements, and this week the court is expected to focus on charges involving the forced movement of people and crimes against humanity. After the Khmer Rouge captured Phnom Penh on 17 April 1975, they began moving an estimated 1 million people, including hospital patients, from the capital into the countryside in an effort to create a communist agrarian utopia.

After a court clerk read a background of the Khmer Rouge and the three defendants, Nuon Chea defended the notoriously brutal former movement, in which he was the number two leader behind the late Pol Pot.

"I don't want the next generation to misunderstand history. I don't want them to believe the Khmer Rouge are bad people, are criminal," Nuon Chea said. "Nothing is true about that."

The 85-year-old communist movement's one-time chief ideologist said no Cambodian was responsible for atrocities during the Khmer Rouge's 1975-1979 reign, reiterating a claim that neighbouring Vietnam instead was responsible for mass killings. Vietnam, whose border suffered bloody attacks by Khmer Rouge soldiers, sponsored a resistance movement and invaded, toppling the Khmer Rouge in 1979 and installing a client regime.

"These war crimes and crimes against humanity were not committed by the Cambodian people," Nuon Chea said. "It was the Vietnamese who killed Cambodians."

The trio of defendants are accused of crimes against humanity, genocide, religious persecution, homicide and torture stemming from the group's reign of terror. All have denied wrongdoing.

The other two are Khieu Samphan, an 80-year-old former head of state who also told the court in November he bore no responsibility for atrocities, and 86-year-old Ieng Sary, who has said he will not participate in the trial until a ruling is issued on a pardon he received in 1996. The tribunal previously ruled the pardon did not cover its indictment against him.

There is concern that the accused could die before justice is achieved.

The Khmer Rouge's supreme leader, Pol Pot, died in 1998 in Cambodia's jungles, and a fourth defendant, 79-year-old Ieng Thirith, was ruled unfit to stand trial last week because she has Alzheimer's disease. She is Ieng Sary's wife and served as the regime's minister for social affairs.

The tribunal is seeking justice on behalf of the estimated quarter of Cambodia's population who died from executions, starvation, disease and overwork under the Khmer Rouge.

"This is the first time the accused persons will be asked questions in a public hearing about their role in the events that led to the takeover of Phnom Penh on 17 April 1975 and about the policies of the Khmer Rouge," the tribunal spokesman Lars Olsen said.

Olsen said the initial testimony would take several days. After the accused have been questioned, witnesses and civil parties will be also called to testify, he said.

So far the UN-backed tribunal, established in 2006, has tried just one case, convicting Kaing Guek Eav, the former head of the Khmer Rouge's notorious S-21 prison, last year and sentencing him to 35 years in prison for war crimes, crimes against humanity and other offences. His sentence was reduced to 19 years due to time served and other technicalities.

That case was seen as much simpler than those before the court, in part because Kaing Guek Eav confessed to his crimes.

Chum Mey, 80, one of only two survivors of the S-21 prison, said he did not believe the three defendants would tell the truth about what happened in the 1970s.

"During last month's sessions we heard them say only that their regime was good and worked for the entire people," Chum Mey said.